I have to admit, these "versus" Poll Position questions have become my favorites, because they're so much fun to see you all debate. I think this week we have a particularly interesting selection for you: 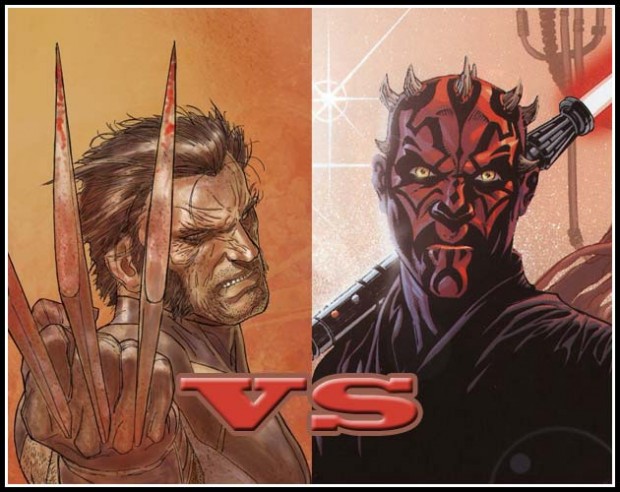 Both possess speed, reflexes, agility, strength, and stamina. Both have survived countless battles against a myriad of foes. Each wields blades that can slice through almost anything (except whatever they make Cloud City railings out of).

Darth Maul can of course bring Dark Force tricks to the table, meaning in theory he could grab Wolverine and throw him around the battlefield from a distance. He also fought two of the greatest Jedis in history to a virtual standstill (make that a literal standstill for all too many on-screen minutes while they waited for various force fields to go down). Plus, cool facial tattoos.

Wolverine, of course, has his ever-loving rapid healing factor. But that's more of a long-term bonus; for the purposes of a single engagement fight, it wouldn't really come into play since, even if he could survive being chopped in half eventually, by the time he was up and about, the fans are already back home and the popcorn is cold.

Maul's twin light sabers give him the advantage of reach, but would be a disadvantage if Wolverine could get in close enough.

I admit, I can't call this one, it's too close. I'll have to see which way the enraged geek spittle flies before I can decide. So have at it, folks!