When last we left our Lone Wolf, he had just discovered he was being poisoned and had rushed downstairs at the inn to decide who to blame for the attempted murder. We chose to finger the priest! 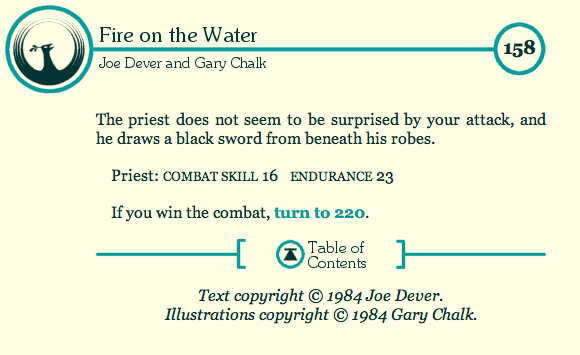 A black sword, he must be guilty! Because if there's one point fantasy and culture hammer home to us every day, it's that black things are evil. ::shakes head::

Regardless, we whip out our long, stiff spear and engage the enemy. We outclass him in combat by seven points (23 with the spear and mind blast versus 16), but he's healthier than us (23 versus 16). In round one of combat, we get a 4, resulting in 10 points of damage to him. Unfortunately the crafty bastard nicks us for 2 points of damage in return.

With our Lone Bloodlust fully aroused by the smell of blood, Bruce Lee style, we fly into a killing rage and land a devastating blow by rolling a 9, resulting in a teeth-rattling 18 points of damage to him! This guts him like a stuck pig, ending his treacherous life before he can hurt us again. Victory! We're now down to 14 END, however. 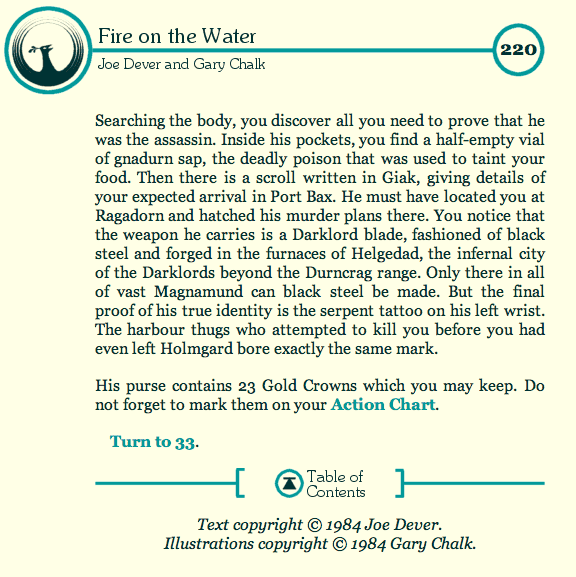 First, never trust anyone with a tattoo. They're all evil.

And second, killing people pays even better than reckless gambling.

On second thought, maybe those aren't the lessons we should take from this encounter. Whatever, loot! 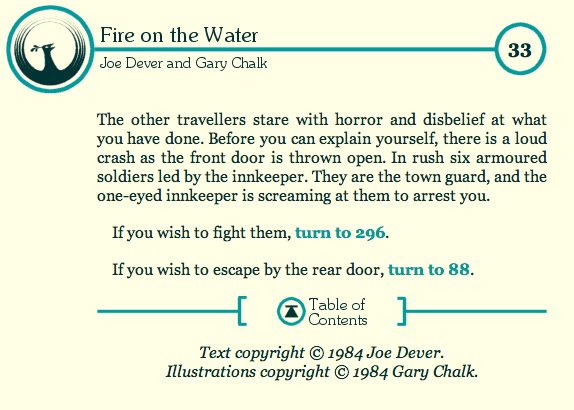 So here's our dilemma this week, folks. Do we take on six backwater provincial guards, secure both in the knowledge of our own rectitude in correctly eliminating an assassin bent on the domination of the bad guys, or do we respect their authoriteh Cartman style and flee the scene?