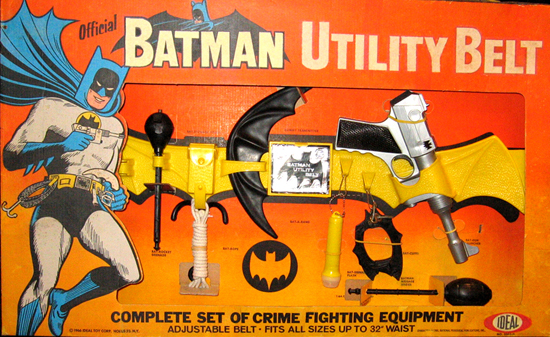 With a hearty tip-o-the-cowl to The Great Batman Equipment Archive, I present to you the opportunity to choose from the Master of the Cool Gadget's collection of goodies for your very own personal use:

Quick, to the Bat Argument Room!

When I was a kid, they advertised various gadgets in the back of comic books. I only ever ordered one thing -- a Batman grappling hook and line. Visions of being able to finally climb up the big pecan tree by the house danced in my head for weeks, until finally it arrived in the mail ... and was a cheap piece of plastic about two inches long with a dental floss line attached. You'd be lucky to use it as a back scratcher. Childhood dreams dashed, I never ordered anything from a comic again.

But now that I am grown up, I can fantasize about a REAL bunch of Bat gadgets! So here are some of the more entertaining possibilities:

I think the grapple gun would be the most fun, though also very dangerous. It's hard to pass up a mobile tank, though, even if the fuel charges would be ruinous. I can't count the number of times I wished my vehicle mounted a cannon, although now that I see that written out, perhaps it's for the best I don't.

So, I'm going with the grapple gun. That thing is awesome.

Which would you pick, and why?