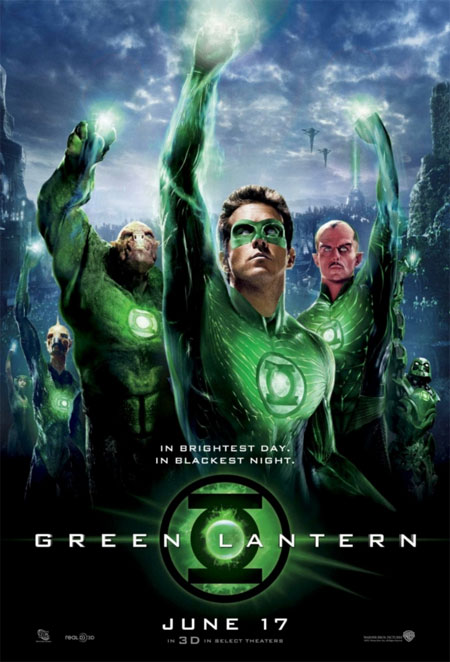 I took the day off yesterday to see the "Green Lantern" movie. With the massive power of my will, I have generated the following (SPOILER ALERT!) review.

Summary: Ryan Reynolds and an all-star cast of computer generated characters meander through a disjointed script on the way to overcoming fear and some other stuff and when does
"Captain America" come out?

Full review: The central anxiety for a comic book geek upon hearing that one of his or her favorite characters is going to make the jump from the printed page to the silver screen is "Will this suck". Because the worst thing possible is to take a cherished, iconic character and seeing it destroyed right before your ever-loving eyes.

I had this exact anxiety upon hearing they were making a "Green Lantern" movie, as Hal Jordan was one of my favorite characters growing up. The whole concept of the power ring is vaguely silly, after all -- a ring that makes giant catcher's mitts and boomerangs that's powered by will and can't affect anything yellow? Seriously?

But the idea of an interstellar police organization patrolling space and protecting alien races was right up my combination super-hero / science-fiction alley. And it worked, partly because Hal Jordan was such a good "straight arrow", no-nonsense, "Right Stuff" kind of guy. Remember, the series was (re)launched in the Sixties, when astronauts were the cream of the crop of American manhood, and stood for everything noble and pure about honor, integrity, and professionalism. Guys like Chuck Yeager and Neil Armstrong were the honest Boy Scouts who were leading our nation into the next century.

Hal Jordan, test pilot, was absolutely in that same mold. Boring and straight-laced, maybe, but also iron-willed and pure of purpose.

Ryan Reynolds, actor playing Hal Jordan in the "Green Lantern" movie, is none of those things. He has a sarcastic demeanor, much more suited to irony and mocking humor than a "Right Stuff" kind of guy. And the character as drawn in the movie follows suit. Not quite sure of himself, a little off balance, not terribly responsible or serious-minded enough, cocksure and irreverent. As written and acted, he's much more "Top Gun". That's not necessarily a bad thing, and I can see how such a template would work for a more modern and jaded audience, but D.C. characters don't tend to work when combined with that kind of modernism. At core, DC characters are supposed to be pure distillations of the heroic spirit. Even their "gritty" characters, like Batman, are boiled down to their absolute essence.

This Hal Jordan, though, is a more complex mix of doubt and assurance, cockiness and humility. And it doesn't really work, because the script we're given is so disjointed and unsupported we're left not with a believable human being doing his best to rise to the (literally) astronomical level of heroism required of him, but rather a confusing and unbelievable hodgepodge of unrelated moments that we're expected to make something out of on our own. As a result we have not a conflicted or complex character, but rather someone who just seems confused and weak. And that does not a hero make.

Furthermore, seeing a ring making giant nets to control what looks like the worst dreadlocks in the universe or making a big anti-aircraft gun or generating a chainsaw for a sword fight ended up, when seen "live", as just ... silly. The flying was cheesy, the costumes were vaguely cheesy, the whole concept of this kind of ring was cheesy. It made me kind of embarrassed that I think it's so cool. This is the fundamental challenge when taking the more ultra powerful, almost fantasy-like characters of the DC Universe into the real world. I mean, the entire Marvel stable is built on the fundamental conceit of "These are real people living in the real world", but which makes them inherently more believable when you see actual actors playing them on-screen. Not so with DC (Batman aside). It's a four-color universe that is difficult to translate into real life, because it's built on such a different foundation.

Ultimately, though, the failing of "Green Lantern" as a movie is an editorial one. I've read comments on other blogs that what we have is not the movie as it was filmed, written, or conceived, that key character and plot development scenes were left on the cutting room floor, and I can believe it. For instance, it's apparent (if you read between the scenes) that Hal Jordan, Carol Ferris, and Hector Hammond were childhood friends. That relationship has repercussions for a major chunk of the movie. And yet, we never see it and we're never outright told or shown that such a prior relationship existed. You have to infer it, from somewhat vague clues. That nullifies a major driver of the emotional action.

When Hammond first appears, it seems completely random. Even when you discover why he was chosen for the task over what the character himself admits would have been better-qualified scientists, you're still left with the puzzle as to why it matters that we're watching this guy. Had we known that he and the other two protagonists were friends, it would have made much more sense and we'd have been invested in his success or failure.

Similar problems occur throughout the plot. Why does Jordan have to fly back to OA just to get permission to fight what he was going to fight anyway? If he quit, why does he retain the ring? In some scenes we jump from day to night without any explanation of why.

Other problems, probably only noticed by obsessive-compulsive geeks like me, are things like "How can an alien ship crash-land on a beach right next to some big buildings, and no one notices for hours and hours? If one of the greatest Green Lanterns in history dies, why would the rest of the Corps not send someone to fetch his remains home for burial in state, instead of leaving them to be autopsied by the primitives who live there? Why does the Corps have no "First Contact" style rules in place? And why do they wear the ring on the second finger instead of the ring finger?

The special effects are, as you'd expect, pretty good. The aliens looked neat, the energy ring "constructs" were relatively convincing, and the world of OA was cool. There were, unfortunately, two exceptions. The first is the Jordan's GL costume. Every time you were in a close up shot of his face, you could see the seam where the CGI suit met the real neck. And it was completely distracting. I kept thinking, "Surely they could have had a REAL suit they put on him for these kinds of shots?" Despite millions of dollars of research, there remains a bit of fuzziness at the border where computer effects overlay real shots. You could see it sometimes when Carol's fingers were over Hal's suit, or when Hal was up against a real sky background.

The other really bad special effects moment came during the almost painful "Let's fly" training scene on OA, when Jordan swoops up beside the very cool-looking (and even better-voiced) Tomar Re and they're laughing and chatting. It literally looks like a "Jib-Jab" movie, where photos of heads are cut and pasted on top of dancing animated figures. It was horrible.

Nitpicking aside, we have the bones of a good movie here, but they were never knitted together into a compelling narrative. I'd love to see a "Director's Cut" some day, as my impression is that a lot of the elements necessary for making sense out of this were filmed but not shown.

Actor Reviews: Ryan Reynolds was surprisingly inoffensive in the lead. He fits the role as written, but as I said in the beginning, the role as written was, in my opinion, a mistake. In other words, they cast the right guy for a bad part. He does as much as you can expect with the role, I suppose. At least, I didn't want to punch him in the face at any point, which was fairly surprising to me.

Blake Lively has caught a lot of crap in other reviews, but I thought she was fine. She didn't come off as wooden or unbelievable in any way, at least to me. I thought she, again, did about as much as you could expect given the role as written.

Peter Sarsgaard as Hector Hammond was great. He had a perfect mix of nerdy self-loathing and big-brained bad-assery. You vaguely sympathized with him even as you wanted to see him get his teeth kicked in. At certain points he reminded me of Vincent D'Onofrio's "Edgar" in "Men in Black", which is one of my all-time favorite villain acting jobs. Definitely the best performance of the movie, although that happens a lot with the lead villain role.

Mark Strong nailed the Sinestro part. Someone else described him as "Spock with a gangster movie mustache" but I didn't get that at all. I thought he was a good blend of arrogance and strength.

Tim Robbins as the Senator was bad. Pretty much any other middle-aged actor would have been better there. His hair looked fake, he hammed it up in every scene, and I just wished he'd have taken longer to die, in an even more painful fashion.

Grade: C- for a lackluster, even boring movie that did not hang together from a narrative standpoint. The elements of a good movie were wasted in the editing room. I don't know if the suits got too involved or what, but what we were left with was a fairly disjointed mess that didn't make any sense.