I see so many various HeroMachine images, that they sort of blur together over time. It's very unusual for one to stick with me so strongly that even months later, I go actively looking for it. Our Power User this week is Lime, who has exactly such an image and story. Here it is copied from her UGO Forums Archive; I include it at the beginning because I wanted you to see why I chose her to profile. Anyone who can do this is someone I want to know more about:

One day after school, a griffin followed me home. I asked my mom if I could keep it. She said no. I don't know why. I promised I'd feed it. 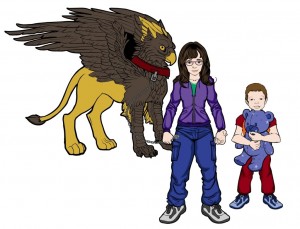 Also, considering the passing of Peter Falk two days ago, I think her final line is very appropriate. So without further ado, it gives me great pleasure to introduce Lime!