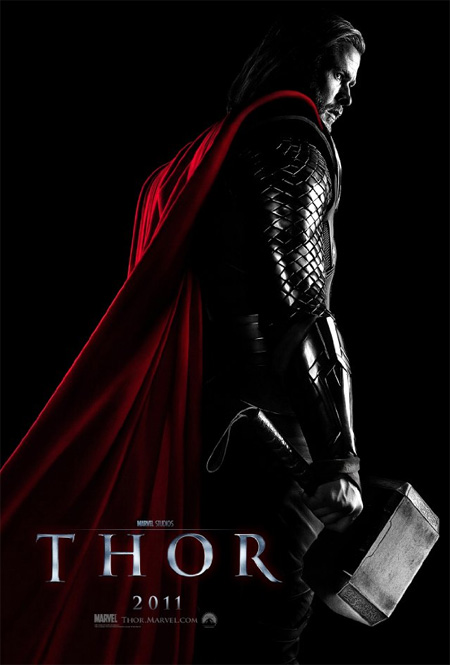 I actually went to see "Thor" on opening night, which I hardly ever do as I am not really a crowd guy. Which was lucky, as it turns out Durango is not a Thor town and thus the "crowd" was only twenty people or so. It was also my first major Hollywood film to watch in 3D, so it was a big day for the Bald Avenger.

I'll put my review after the jump for those of you who haven't seen it yet and don't want any of the impact ruined. In other words:

BEWARE! Here there be SPOILERS!

The Good: Visually a very appealing translation of the Thor comics. Chris Hemsworth looks and acts great as the God of Thunder, the fight scenes are awesome (flying hammer FTW!), and the Destroyer is one of the coolest enemy targets in a long time. Tom Hiddleston made a fantastic Loki. Most of my favorite bits of the sprawling Thor mythos were present.

The Bad: Those pieces didn't really coalesce into a single satisfying narrative. The whole film felt like two hours of set-up for something that never happened -- the "Avengers" movie, or some other "Thor" movie, something.

The Ugly: Volstaag should be much, much fatter. This was just a guy in a bad beard and fake pot belly coat!

Long-Form Review: "Thor" isn't a bad movie, but it wasn't great, either. All of the major comic book character plot points are there (and then some!) -- you get the power struggle in Asgard between Thor and his brother Loki, the threat of the Frost Giants, the importance of the Rainbow Bridge, the humbling of the Thunder God, the love between a mortal and immortal, the Warriors Three, Mjolnir getting flung into the faces of mighty foes, the Destroyer blowing the crap out of everything, hints of the Avengers looming in the future, thunder and lightning, and more.

Visually, director Kenneth Branagh has done a fantastic job translating the distinctive Jack Kirby universe onto the big screen. Asgard looks amazing, the costumes work both in the other world and in this one, the special effects are spectacular, and even the most bizarre Kirbyisms come off well (I'm looking at you, incredibly long Loki horns!). You very much get the science-fantasy feel from the visual design.

The actors do a good job with the material as well, especially Tom Hiddleston as Loki. He nails the perfect combination of silver-tongued liar and sympathetic outcast. Just as in the best Thor comics, you can simultaneously despise Loki while understanding why he does what he does. It's a neat trick, and Branagh manages it partially thanks to an excellent performance by Hiddleston.

In terms of plot, as I said there's a lot going on here. In fact, I would say there was too much. The temptation in any of these comic book adaptations is to throw in too much of the vast, decades-spanning history, and I think the writers fell into that trap.

Fundamentally they're telling two stories. The first deals with political and military machinations in Asgard itself involving whether Loki or Thor will be the one to succeed Odin as King, as well as a simmering conflict with the Frost Giants.

The second deals with Thor's humbling on Earth and subsequent involvement with the mortal woman Jane Foster.

Either one would have made a great movie, but giving both equal time here shorted both of them, I felt. Perhaps because it's Natalie Portman in both roles, but I felt here just as I did in "Star Wars", that I was being told two people were in love while never being shown it, or at least not in any kind of convincing way. One fireside chat and suddenly it's love? No. I felt no chemistry at all between the two of them, mostly because they never really shared anything important. Love is more than rescuing equipment, kisses on the hand, and shared explanations of an Einstein-Rosen bridge. Since half of the movie depends on that relationship, I needed more attention given to it.

I loved all the plot stuff involving Loki, and was definitely more satisfied with what we were given of it. I get the relationship between the two brothers, and I believed Loki's motivation.

The problem is, there was so enough stuff going on in each plot for a full and satisfying movie, but instead of choosing one and going with it, we had both, which ended up just being a bit confusing and muddy. I wish frankly they'd stuck with the Earthbound Thor, giving us enough of Asgard via flashback to make sense of it all, without robbing the transformation of arrogant God to humble mortal of its steam.

Like the love affair, I didn't see enough of Thor's humbling to believe it. You're told your dad is dead and you fail to pick up a hammer and suddenly you know what it means to be mortal? And to cook an omelette? Again, this is the heart and soul of the movie, the whole point of the exercise, but it's treated almost as a throw-away.

I loved how in "The Ultimates" you were never really sure whether Thor was a mutant with delusions of grandeur or really the God of Thunder. While the mortal characters got this, we the audience were never in doubt, and I thought that was a real missed opportunity.

In summary, the movie looked great but lacked heart. I didn't believe the love story nor the transformation of Thor's essential nature, and without those we're left with a series of admittedly cool fight scenes without a lot of soul to make them matter. I'd have been happier losing the Warriors Three and whole chunks of the Frost Giant stuff while focusing more on Thor's character transformation.

You won't be sorry you saw it, but you're not going to be jumping for joy either. And you can skip the 3D version -- it didn't enhance the experience at all for me.

If you've seen it, I'd love to hear your thoughts as well.