The JLA’s newest member is … 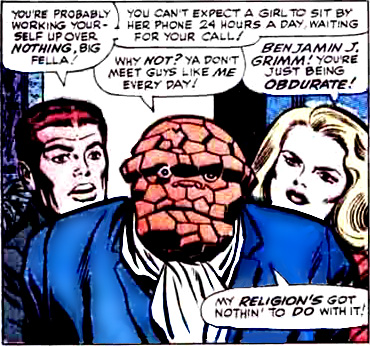 Looking at this list I can hear you asking incredulously, "Where's Spider-Man?! Where's WOLVERINE?!?!!1!" They're not on the list for one simple reason -- they'd win. And that would be no fun. So I made the challenge a bit tougher for you.

I like interesting stories. So I tried to come up with characters who would really interact with the zeitgeist of the JLA in an different way with big storytelling upside. So with one-sentence summaries, here's how I see it.

For my money, I have to say I think the best story would be Ben Grimm. I mean, there are so many massively distorted freaks in the DCU, and people are so darn friendly about it, I think it'd be a real baby-blue eye-opener for The Thing to see how normally he can be treated in a universe not run by sadists. The rest are mostly interesting for how the JLA would adjust to the character, but in this one the real story is how the character would be changed by the JLA.

How about you, what would you pick?

20 Responses to The JLA’s newest member is …