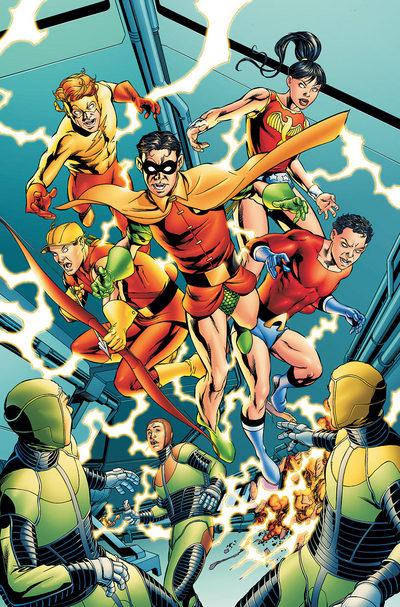 I thoroughly enjoyed the discussion in last week's Poll Position regarding the greatest comic-book villain of all time (you voted for The Joker by a wide margin), so I wanted to continue it this week, albeit in a lighter vein:

I had a hard time defining for myself what a "sidekick" really is. Some of the other lists I looked at included people like Abe Sapien from the Hellboy series, or Frozone from The Incredibles. But they seem to be more in the "teammate" role than "sidekick". I thought it should be limited to the "Boy" or "Girl" type of character, like Wonder Girl or Aqualad, an alternate, weaker, younger version of the main character. But that would leave out people like Kato or Tonto, secondary characters who weren't modeled after the lead, and who weren't younger. And I can't honestly argue that Kato and Tonto aren't sidekicks.

So finally I just said to heck with it, and put up the ten most recognizable names I could think of that primarily starred in comic books alongside a more popular or powerful character, whose role was primarily that of support. And this is what I came up with.

If we were plotting the Platonic ideal of "Superhero sidekick", it should probably include the following:

I'm not saying you have to have ALL of those attributes to qualify as a sidekick, but rather that the ideal candidate would include them all. If we use that as our guide, it seems to me the qualifying members of the list would be Aqualad, Kid Flash, Wonder Girl, and Bulletgirl (who, given her status as a female in 1941, barely qualifies as "socially inferior status"). And out of that list, I'd probably go with Kid Flash, for the reasons I outlined originally.

But looking at the list as a whole, there's no way I can rank Kid Flash over Robin or Bucky. He hasn't had nearly the cultural impact as those two, nor did he play as prominent a role in the main character's history. Robin and Bucky were with Batman and Cap almost from the beginning; they were major players on their own; and they feature prominently in the popular conception of the main. I mean, you can't think "Batman" without thinking "Robin".

So if I put aside all the clever logic and aforementioned internet nerd argument spittle, and just go with my gut, it has to be between Robin and Bucky. And at the end of the day, I have to go with Bucky, because eventually he took over for his mentor to become the actual Captain America. Robin never became Batman, he just became Nightwing.

That's how I'd vote and why, but I would love to hear what you think about it. So fire away!

(Image and characters above ©DC Comics.)