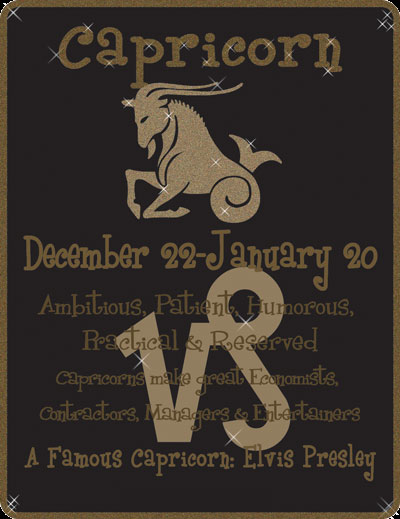 Despite recent attempts to subvert the sublime perfection of the modern Zodiac system with the discredited "sidereal" horoscope model, we here at HeroMachine central remain committed to our stated goal of doing a Character Design Contest for each heavenly sign. This is our last chance to honor Capricorn, the sign of the Goat, so off we go!

Remember, the goal here isn't necessarily to create a character named "Capricorn", though you could certainly do so if you wanted. Rather, the goal is to be inspired by any aspect of the name, history, or images associated with the sign to create something that looks awesome. For example, since the symbol is a goat (sometimes with the rear end of a fish), you could do something related to the animal portions. Or you could find examples of famous Capricorns and do a character based off of them.

The constellation is usually depicted as a goat with a fish's tail. One myth says that when the goat-god Pan was attacked by the monster Typhon, he dove into the Nile; the parts above the water remained a goat, but those under the water transformed into a fish.
Capricorn is sometimes depicted as a sea-goat, and sometimes as a terrestrial goat. The reasons for this are unknown, but the image of a sea-goat goes back at least to Babylonian times. Furthermore the Sumerian god Enki's symbols included a goat and a fish, which later combined into a single beast, the goat Capricorn, recognized as the Zodiacal constellation Capricornus.

"The symbol of the goat rising from the body of a fish represents with greatest propriety the mountainous buildings of Babylon rising out of its low and marshy situation; the two horns of the goat being emblematic of the two towns, Nineveh and Babylon, the former built on the Tigris, the latter on the Euphrates; but both subjected to one sovereignty."

For more inspiration, you could go to Google Images and do a search for "Capricorn". Or just click that there link, to save yourself some keystrokes.