Congratulations to the winner of Caption Contest 90, for subtlety, humor, and very sly innuendo -- JOEL! 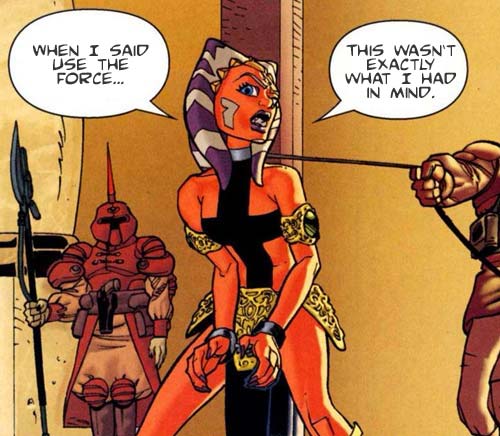 Joel, just let me know what you'd like for your prize.

We had a number of very funny runners-up, as well, which I now present for your edification and enjoyment. Note that Joel had a second one that was almost as funny, and Dan McDorman had three. Impressive!

Tim Says:
1) “This seems to be a little unorthodox, master.”
2) “Are you sure this is part of typical jedi training?”

Bael Says:
1) This is the last straw, Leonard.
2) I’m never going to one of these conventions with you again!

count libido Says:
“Okay, I dressed up as Asohka for you for ComicCon…”
“Now can we pleeease go shopping?”

Watson Bradshaw Says:
“A few more tentacles…..
And we can sell this book in Japan.”

1. I think you misunderstood when I said…
2. …”I support womans suffrage!”

JoeBroFoSho Says:
Ballon One: Hey skyguy. I know it might be a little late to say this but…
Balloon 2: IT’S A TRAP!