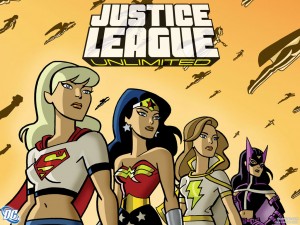 I've been lucky enough to have spent the last few weeks catching up on the wonders of Marvel Digital Comics, and along with finally watching some of the new "Avengers: Earth's Mightiest Heroes" I've been doing a lot of thinking about what makes for good super-hero entertainment. And animated TV series are definitely a huge part of that.

So I want to know:

First, I worded the question carefully. I don't want to get into the one-off animated films, or to get into a long hairy discussion of Japanese animated series. I want to focus on American TV shows, period. The rest can wait for another day, because I said so, that's why. Also, get off my lawn!

For my money, I have to go "Justice League Unlimited" for the best all-around characterization, storytelling, and animation. Every episode had something to love.

Now it's your turn to tell me how wrongitty wrong wrong I am in comments, and make the case for YOUR favorite!