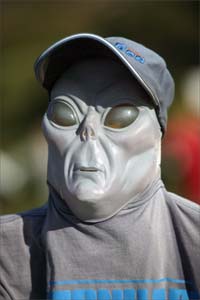 Your character design challenge for this week is to create an alien. You could go all out and do examples of several different sub-species inhabiting a planet, or a super-hero with an alien background, or a fantasy alien invader (like the Mind Flayers), or a specific alien from literature (a named Green Martian from Burroughs, for example), or anything else you can think of that would qualify under the name "alien".