Let's face it, the ability to save people is big for super-heroes, but at the end of the day we all like blowing crap up. Which brings us to this week's Poll Position question: 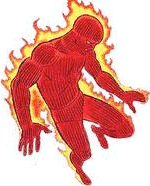 As always, I can't help my intensely practical side from coming up any time we talk about translating super-powers in to the real world. You might think practicality is silly when you're talking about shooting lasers out of your eyeballs, but psychological demons are not so easily expunged. So which of these purely destructive abilities might actually be useful as a way of getting along here in the modern world where things like paychecks and health insurance are concerns?

Since I'm not a super destructive guy in general, and since I do not believe I would enjoy the feeling of multiple bullets penetrating my soft, doughy flesh (as would undoubtedly happen if I tried to parlay my vast destructive powers to a life of crime, crime-fighting, or military service), I'd probably go with the Torch's fireballs. Even if the oil-well-snuffing thing didn't work out, it seems like you'd be valuable making breaks for wildfires and such. Sometimes you have to destroy the forest to save the forest.

What about you? Any obvious powers I missed, or takes I got wrong?