One of the more irritating customs of the comics genre is that nothing is permanent. If your favorite character or supporting cast member dies, just wait a few issues and he or she will be back, one way or another. They play the same trick with powers, taking them away and adding them over and over again, so if you follow a character long enough you end up in a constant fugue state of deja-vu, knowing you've seen that story arc before. 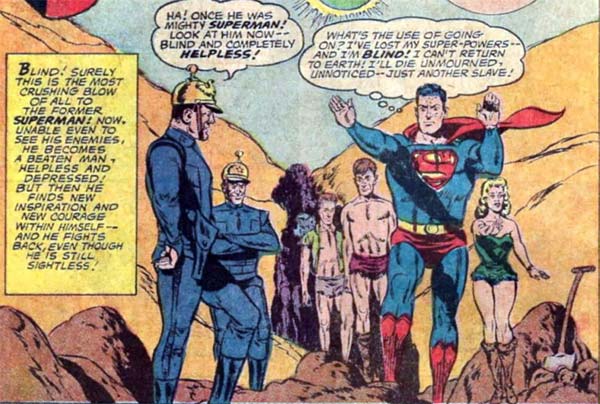 That remains true even for the Big Guy himself, Superman, who's been through the death-no powers-new powers-back to the old powers loop plenty of times, particularly in the recent past. But I got to wondering what it would be like in a fantasy fantasy world where Superman permanently had one of his major powers deleted:

Thoughts after the jump!

For my money, I'd axe the super speed. We already have speedsters, why should Superman be the best or almost the best at that, too? Give the other guys something to brag about! I think it would help him to experience life at a mortal's pace, and would make the challenges he faces more interesting.

What about you, which one would you prefer to see taken away forever?