Having worked our way from imaginary epic super-battles from land to air, could you doubt that sea was far away?

So slip on that swim suit and let's get moist! 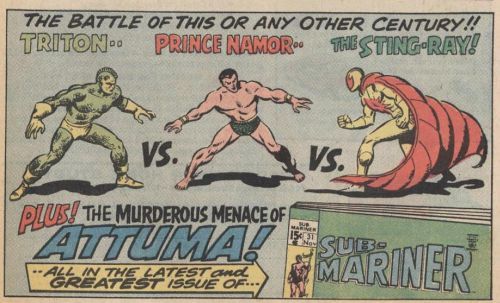 Honestly, the two main names are Namor and Aquaman. And I'd be honestly curious to see how a fight between them would shake out. In general, DC characters tend to have more raw power, but Marvel characters tend to have the will to use what they've got more ruthlessly. I'm pretty torn on this one, unsure which way to go. I get caught up between the scaly Speedo and the scaly orange tunic, hard pressed to say which is more ridiculous.

So I'm going to just roll the dice and say Namor, because I love his hair cut.