Few things get gaming geeks more riled up than arguing about alignment. Worthwhile or pointless, good or bad, nonsensical or the Best Thing Evar? Goodness (or Evilness or Chaositude or what have you) knows, if you've ever dealt with an angry twelve year old "role playing" a chaotic evil character in your party, you've seen how bad alignment can be when played poorly. And it doesn't make a lot of sense if you think about it for too long. But it's been an integral part of game design almost from the beginning, for better or worse. 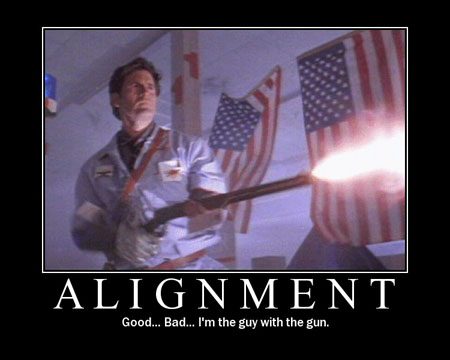 My question for you this week is, "What classic AD&D alignment would your favorite comics characters be?" I'll start it off with a very obvious one -- Superman is Lawful Good. Never does anything selfish, always plays by the rules, thinks authority is the best thing since Lois in a mini-skirt, code against killing, the works.

But how would you rate Batman, or Spider-Man, or the more troublesome and dark characters like The Punisher or Spawn? Do you judge characters by what they do, or where they're from, or what they say they're about, or what?

Also, how do you judge characters' actions in games that do not have a formal Alignment system, like Champions for instance? Do you find that leaving that mechanic out enhances or detracts from the game play experience?

Finally, if you have any fun stories about alignment played either well or poorly in your RPGs, I'd love to hear them.

Have at it folks!

This entry was posted in Open threads, RPG Corner. Bookmark the permalink.