By a two-to-one margin, you all decided to cut through the heavier foliage towards the northeast, and it looks like our Kai Sixth Sense training has done the trick:

You have cut your way through the thick under-growth for nearly half an hour when you hear the beat of wings high above the trees. Looking up you can just make out the shape of a Kraan approaching from the north. It is one of the monsters that attacked the monastery and on its back are two grey-skinner creatures armed with long spears. These are Mountain Giaks -- evil servants of the Darklords, full of hatred and malice. Many centuries ago, their ancestors were used by the Darklords to build the infernal city of Hlgedad, which lies int he volcanic wastelands beyond the Durncrag ranger of mountains. The construction of the city was long and tortuous and only the strongest of the Giaks survived the heat and poisonous atmosphere of Helgedad.

Hidden by the trees, you freeze, ckeeping absolutely still as the Kraan passes overhead and disappears towards the south. When you are sure that it has gone, you move off once again into the forest.

Had we not been forewarned by our amazing brains, we might have ended up as Kraan-bait. But wait, there's more! 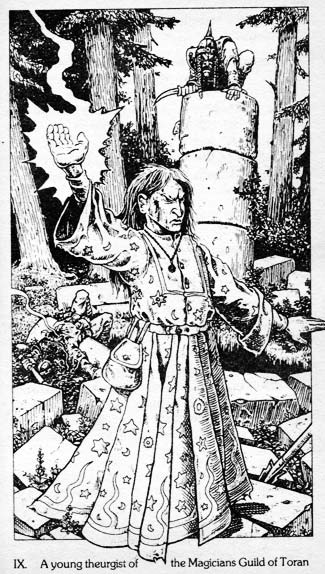 You have covered about a quarter of a mile when you hear shouting and a noise like thunderclaps ahead. Edging nearer, you soon make out a clearing that you recognize to be the site of the ruins of Raumas, an ancient forest temple.

A war party of Giaks, some twenty-five to thirty strong, are attacking the ruins from all sides. Many more of the Giaks are dead or dying among the broken pillars of marble, but still they assault whatever is hidden inside. Suddenly, a bolt of blue lightning rips through the front ranks of Giaks sending the armour-clad creatures tumbling in all directions. A Giak, taller than the others and dressed from head to foot in black chainmail, curses at his troops as he whips them forward with a barbed flail.

With weapon ready, you move to the edge of the clearing, under cover of the thick foliage, and try to catch a glimpse of the defenders. To your amazement, the ruins are being defended by a young man no older than yourself. You recognize his sky-blue robes, embroidered with stars. He is a young theurgist of the Magicians Guild of Toran: an apprentice in magic.

Five Giaks charge forward, their spears raised to stab the apprentice as he hurriedly retreats deeper into the ruins. You see him turn and raise his left hand just before a bolt of blue flame shoots from his fingertips into the snarling Giak soldiers. Close to where you are hidden, you see a Giak scuttle past and climb one of the pillars of the temple. He has a long curved dagger in his mouth and he is about to jump on the young wizard standing below.

So what will it be, intrepid adventurers, adventure or flight? Do we run the risk of failing in our mission to warn the king in order to possibly help one man, or do we brave the odds? Or slightly less brave the odds with a chunk of rock fired from cover? Or screw it, a high-pitched warning, squeaked out from the bushes?

This entry was posted in Lone Wolf: Flight from the Dark. Bookmark the permalink.