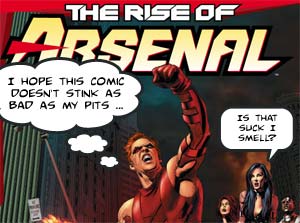 What I love about Mighty God King's post, though, is the point he raises that all too often, "modern" comics have to get their "edge" by basically insulting you as a reader for enjoying the product:

But on top of this being about Roy Harper, whom you don’t care about much when you think about it for more than two seconds, it’s a terrible series because it seems to be designed to remind everybody that superheroes, as a concept, are really quite stupid. We all know that superheroes are a stupid concept and they don’t work if you think about them for two seconds.2 When Roy screams out that the entire idea of kid sidekicks just endangers kids or that Donna Troy abandoned her kids to go “whore around in space with Kyle Rayner”3 all it does is remind me that I am reading a comical book about people in tights fighting crime and how none of that actually makes sense. It’s like if I was reading Lord of the Rings and Sam suddenly started whining about why hobbits shouldn’t have hair on the tops of their feet. It makes the entire comic feel like a judgement [sic] on the reader for enjoying the genre, for crissake, and it’s something DC in particular just keeps doing again and again and again, and when it’s not this particular thing, it’s something else about how I don’t like comics in the right way and every time it happens I want to read DC comics less and less.

We all know these things don't make sense. We know super heroes are silly, and the plots are usually re-hashes, and the entire edifice breaks down with any kind of actual consideration. But we like them, ok? They're fun, and they're cheesy, and they're awesome. Nothing is as much of a buzz-kill as some full-of-himself creator sneering at his fans as if they're morons. And I tend to get that feeling a lot reading some of the mainstream stuff. Maybe that's why I enjoy "Invincible" so much, it is what it is and the creators revel in it.

Marvel has always gotten this, even though they built their reputation as the more "realistic" company. As MGK explains, maybe that's part of the reason it works:

Marvel can also generally avoid the “but how does the real world come into this” trap because their heroes tend to be more real-worldy in the first place, and when they aren’t, they basically just say “aw, hell with it” and have Thanos eat a planet or something.

So, yeah, more planet-eating, please, and less whining and condescension from our comics creators would be great. Get on that.

This entry was posted in Super-Hero Stuff, Things I Like. Bookmark the permalink.

5 Responses to Mighty God King on Arsenal and comics