We had a ton of great entries for Character Contest 32, although probably a third of the total were ineligible (mostly because they showed an actual D&D character rather than a modern super-hero by that name). Nonetheless, we have a rich bounty of awesome images I wanted to highlight as Finalists, and I appreciate all the hard work everyone put into their submissions.

First up, I loved the spell effects on Oquies' character, particularly the fantastic look of the glow globe and background streaks surrounding the staff head here. It's one of the best "energy" treatments I've seen. 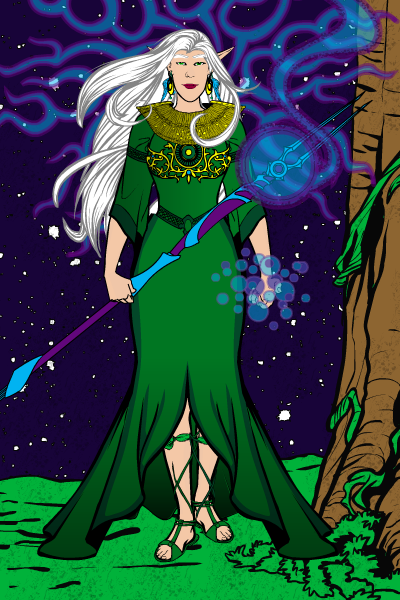 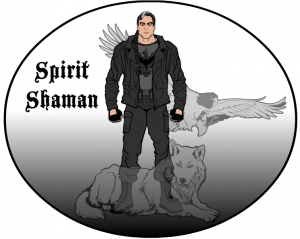 What particularly caught my eye about Gargoyle's "Warblade" is how he got a 2.5 style three-quarter profile pose and a dwarf body out of HM3. Really nice job on that! 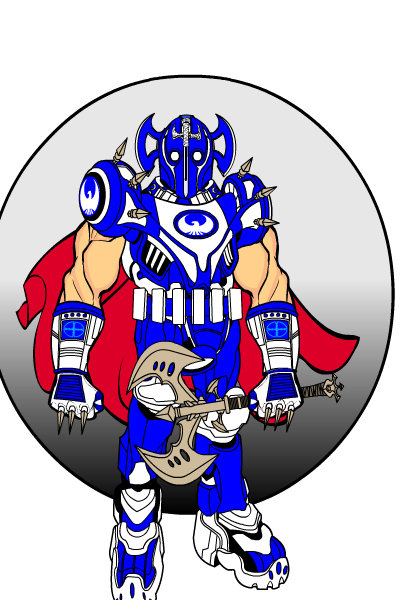 And although I don't quite see how he's a super-hero (or villain), I just loved the axe guitar from Freakshow's rock and roll avenger "Savage Bard": 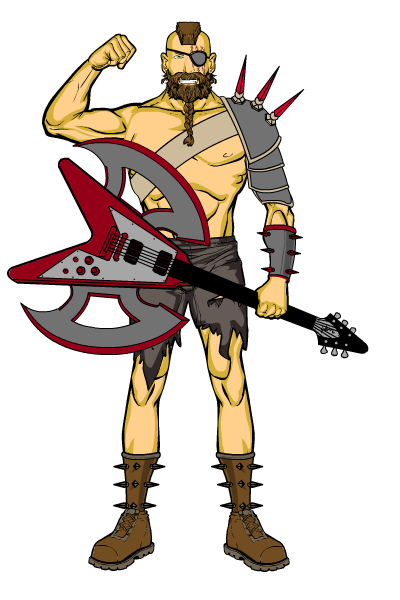 Although I liked at least parts of all of those illustrations very much, the next few are the entries I seriously considered making the overall winner. I feel like they really captured the spirit of the contest, translating not just the name but the essence of those D&D classes to the modern super-hero comics world.

First was MLS' "The Cleric". I like the use of the double-breasted button-down Rocketeer vest with the flaring long coat tails, the use of the holy symbol, and the bandoleer of holy implements. 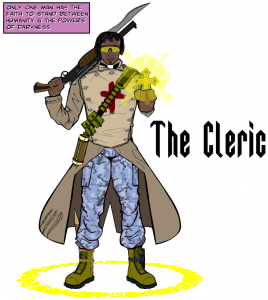 Jack Zegler also went for a modern holy man, but with more of a "street preacher" feel, with "War Mage". I like the expression on his face and the simple but realistic clothing. He looks like he could be stalking the streets of your local urban hell hole right now, defending us from undead crackheads. 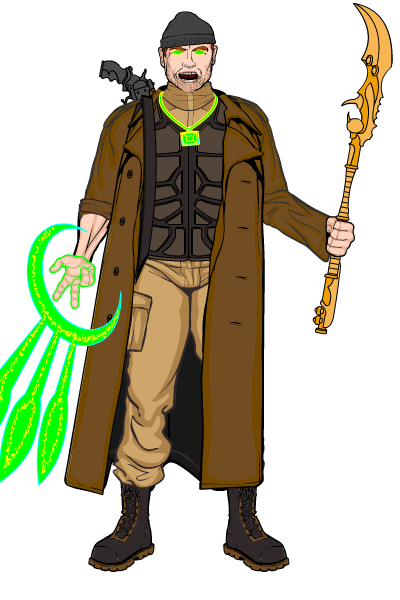 I loved Alex' "Samurai", which he describes as an Australian tattooed warrior. The tatts, the black jeans, the awesome eagle shirt, the hat, the sword, they all work great together and make for a very interesting character design. 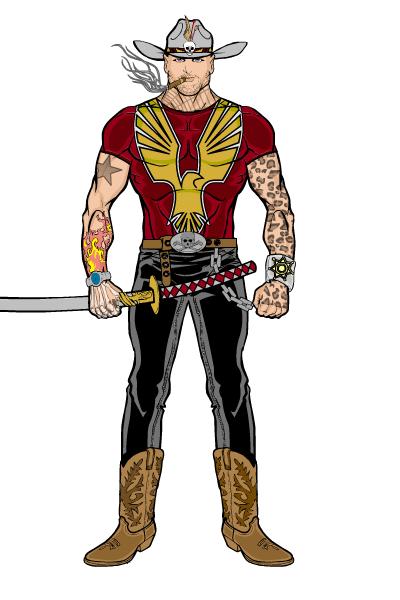 Atomic Punk did a great job envisioning what a mage in the modern military might look like and how they would operate. I liked the camo cape over medieval armor particularly. 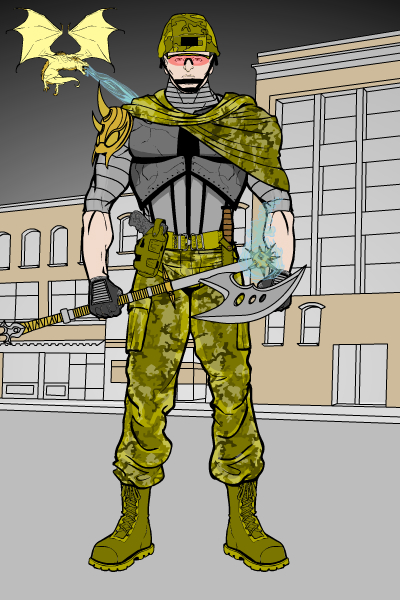 DiCicatriz continues to bring it with "Psychic Warrior". I love the hot pink glow lines on the expanded and masked insignia used as armor elements, that's a very cool effect. 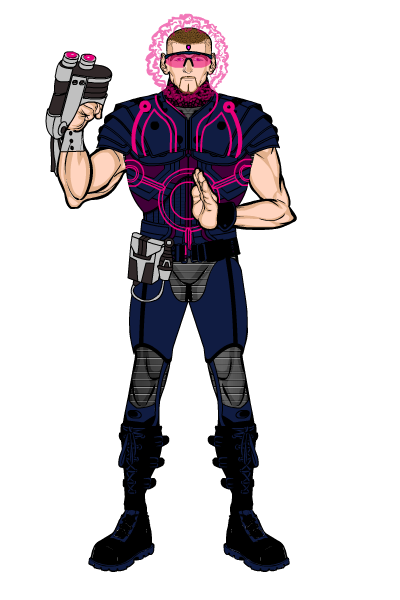 "Rune Priest" by Doomed Pixel was the first one I came to that made me sit back in my chair and say "wow". I love the glowing letters placed around and matched to the colors of the lightning. It's a great design and shows how important composition is. Plus the look of the priest, staring down into his hands, is perfect. 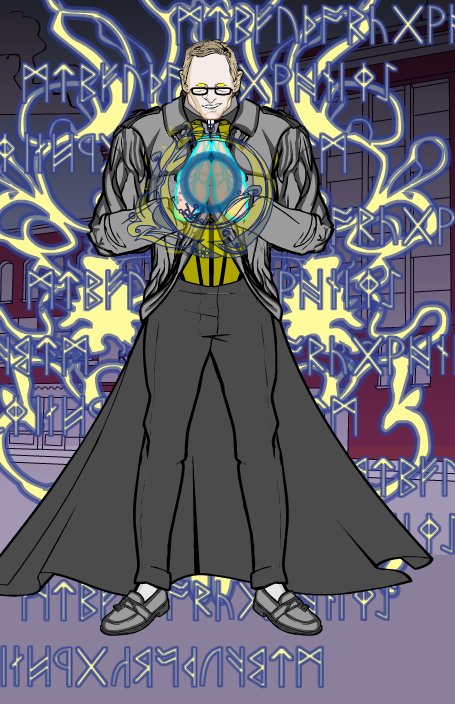 Which brings us to our overall winner, the character design and illustration I thought best captured the essence of the contest while also seeming like a totally kick-ass guy in his own right. And that's "Bard", by Vigilante. I loved his backstory too, which I'll repost here:

This is bard, a man with the ability to cause hallucinations with his voice. When he sings, the tonal pattern of his voice causes mental feedback and results in illusions of sight, sound, smell, taste, and touch. In an attempt to silence him, the mob mutilated his vocal cords, leaving him with the strength only to whisper. Now he uses special amplifying technology to project his voice through speakers in his hands. He is a morally ambiguous character, fighting crime one day and robbing a bank the next. Whatever is most advantageous at the time.

And here's the winning man himself: 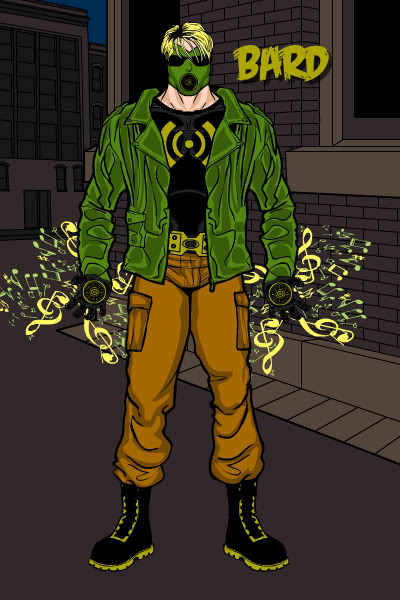 I love the music effects around his speaker palms -- said speaker palms, by the way, being a whole level of awesome just on their own -- and the way the mask works by having an insignia sized down over the mouth. The green jacket and face mask also work great.

So congratulations to everyone, especially to our winner Vigilante! V, let me know what you would like as your prize item and I'll put it on the list.