I've chosen the Finalists for Character Contest 31, which challenged you to build a great weapon using HeroMachine 3. I've got quite a few of them, so follow me after the jump to see them in all their glory!

I really liked Alexander's detail work here. His "Divine Sword" looks like it could be in a Final Fantasy game easily. 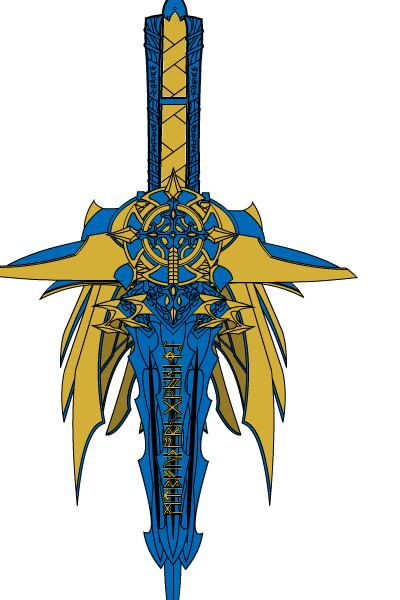 Asherian's "Wind and Wave" sword & board combination are also interesting. I liked the attempt at the inlay on the sword, although I feel like maybe it doesn't quite blend in with the blade exactly right. I love the joining of that hilt with the crossguard though, it looks fantastic. I'm not as excited by the shield, but the sword was definitely a hit. 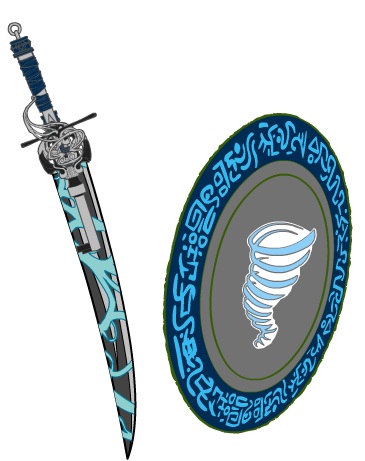 I know the app crashed on Blue Blazer before he could color "Shadowfang" but I actually think that might have been a good thing. I could see this as an illustration (maybe with sepia lines) in an RPG supplement, and I think it goes to show that you don't have to get all crazy with halos and effects to come up with an effective drawing. 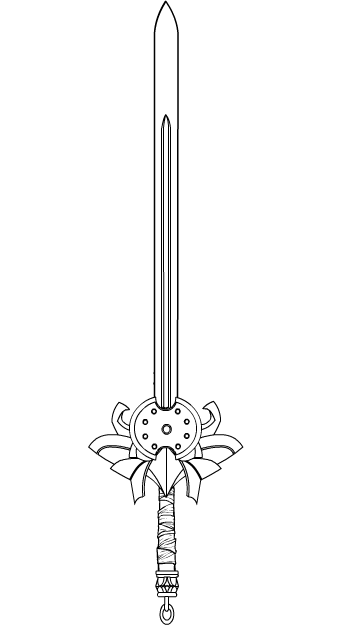 Fyzza's "The Flaming Sword of the Eagle" shows a real nice sense of beauty and design. I love the gryphon engraving on the blade and the way the wings form the crossguards. I do wish the flames had been a little better laid out, but maybe that's more my fault for not putting a better set in there! A very harmonious and cool looking design, though. 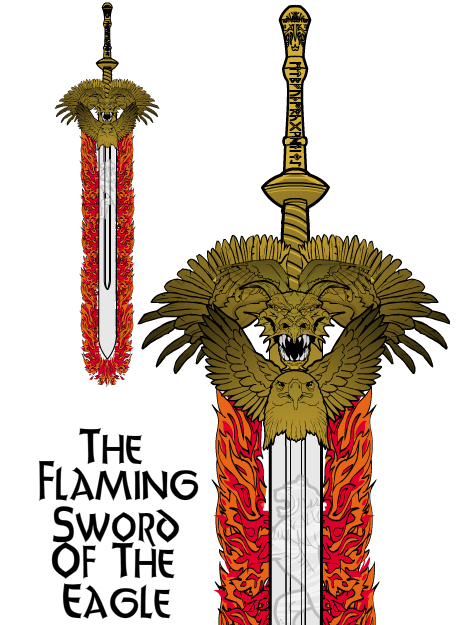 Gene has several designs in the Finalists this week, including this really spooky "Witchslayer". I like the smoky ethereal look of the blade, and the pentagram & axe blade hilt, but what I really love are the spirit faces smoking out of the center. That's just cool. 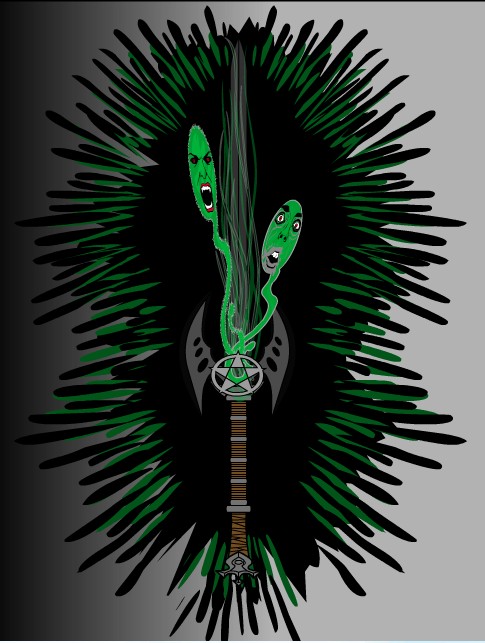 Hammerknight's "Angel's Wrath" also uses the wings as crossguard technique to great effect. This looks like a true named blade and something you'd be impressed to find in your dungeon crawl. 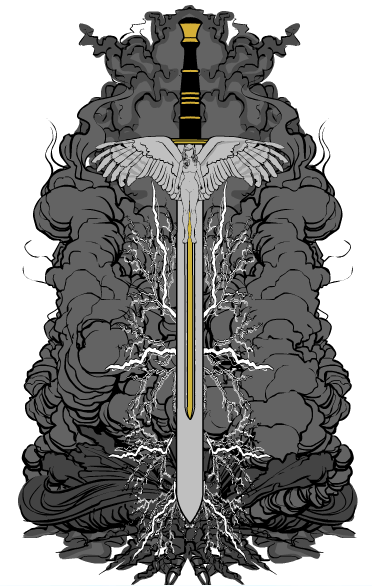 "Sword of Vengeance" by Jack Zegler makes great use of masking and patterning to get a nifty see-through effect showing trapped souls. I'm not as crazy about the hand guard, but the overall impact works great. 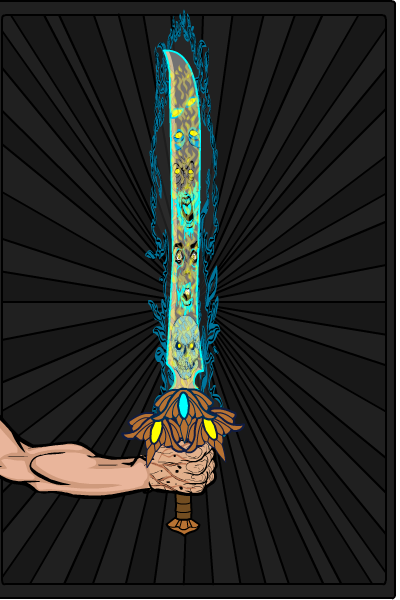 Kaldath brings it every week, and this time is no exception. I love how the flames of his "Flame Sword" really look like fire. Making the hilt out of what I think is a glove is also pretty cool. Overall this is a very simple but effective treatment making a truly believable weapon. This is what Thundar's sun sword should look like! 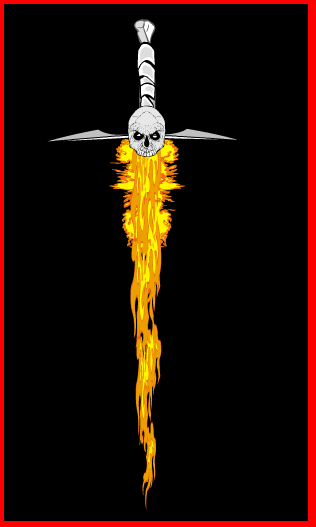 Martian Blue broke the sword trend with his "Dragon Axe", which sports a fairly amazing array of small, powerful enhancements. I love the dragon foot holding the pommel stone, it fits so well with the dragon head at the top. I also like the holes and the subtle patterning in the twin axe blades. My only reservation with the entire piece is, strangely, how thick the haft is. It doesn't look like something you could easily hold, and if it's for giant hands then the blades would be really small.

Quelsir rounds out our Melee Weapons section with a very cool but simple "Storm Spear". Again, this seems like something I'd like to find in an RPG supplement. It doesn't do anything over the top crazy, but it all works together, from the general design to the coloring. Very tight!

Among Danny Beaty's many entries was this bit of steampunk goodness he describes as an "Air powered rifle". I love the whole effect and the concept, it works great. My only minor quibble is with the hose going from the gun to the compressed air belt, but it's just a really nifty design otherwise. 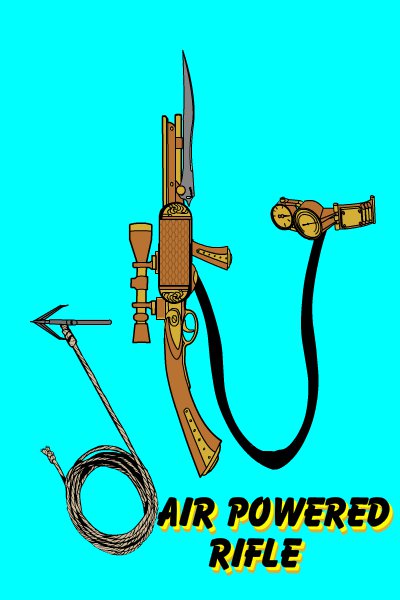 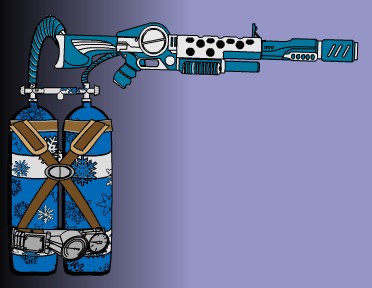 Gene hits the list again with his 1800s style Vampire Slayer gun, firing wooden stakes in a full metal jacket. Which is just all kinds of awesome. He submitted a replacement for it, but I actually prefer this original version. 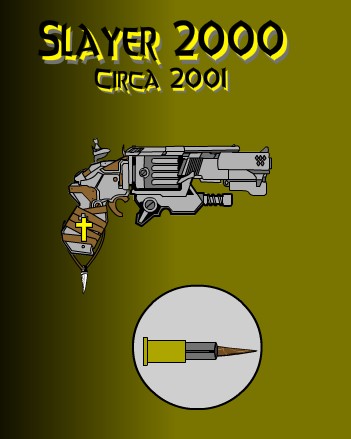 Jordan, after many failed tusslings with Facebook, managed to get his "Thunderbolt Hand Cannon" uploaded, and I'm glad he did. He did a great job combining the disparate elements into a cohesive whole that really looks like it all belongs together. I thought the upside-down grip at the end was particularly clever, conforming to the user's elbow instead of its usual placement in the hand. Nice job Jordan! 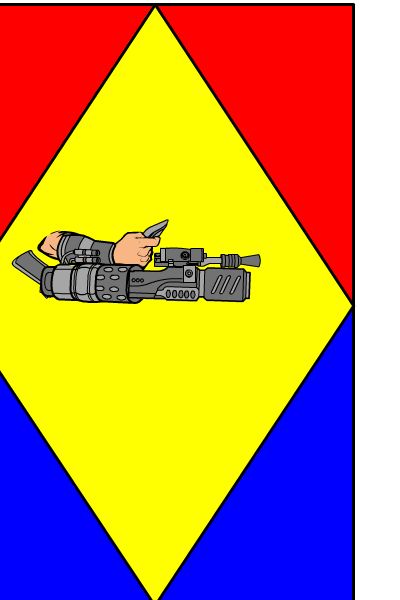 Now we come to the category of weapons that defy easy categorization. First up is one of my favorite entries overall, Atomic Punk's "Doom Buggy", who I think we can safely assume is some kind of Mirror Universe evil analogue of Herbie the Love Bug. I totally want one. 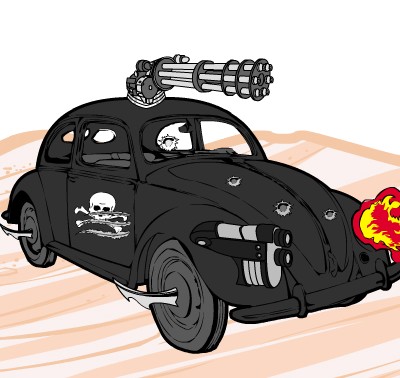 Capshot came up with an intriguing device you strap to your back, only instead of the usual wimpy armrest controls he added gatling guns. Because anything worth doing, is worth overdoing, am I right Mister Bond? I particularly like the bullets flying out of the one gun, that's neat. 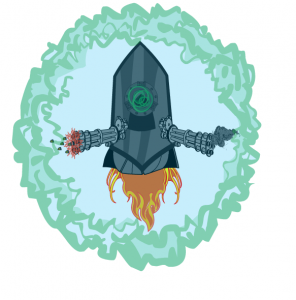 Martian Blue's hypno-needle gauntlet creeps me out, but in a good way. I think this would be right at home in "Bio-Shock". A very clever and fun invention.

Sol Invictus put together what I think is definitely the best overall "scene" this week, with his massive moon-based "Death Ray", a staple of all good Golden Age sci-fi stories. The details on this one worked out great, I really like everything about it. I do feel bad for those poor bastards in South America, but what can you do? In all great art a few sacrifices must be made. 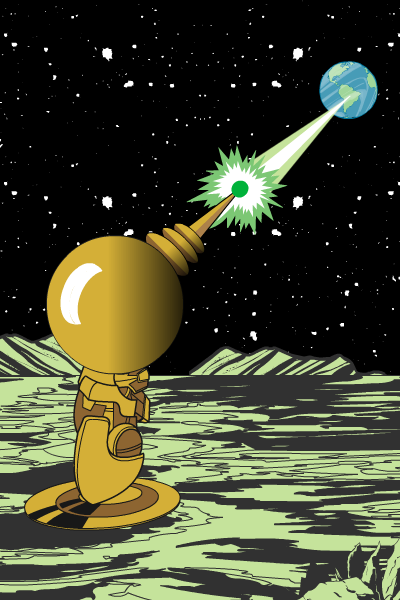 Finally, our winner, someone who took the definition of "weapon" and really twisted it around to previously unimaginable proportions. I confess this made me laugh right out loud when I saw it, and then I immediately wanted to try and build one. Ladies and gentlemen, I give you SpiderCow2010's unforgettable contraption, "The Burler", which achieves its deadliness by flinging angry bears over castle walls to wreak incalculable damage. Whether that's to the bear or the defenders is unclear, but nonetheless you know some demented warlord is totally going to try this. 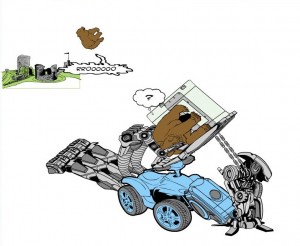 I also like that it's mobile, because bears is tricky fast. The thought balloons really sell it, too. I still am getting a kick out of this thing as I look at it right now. Well done, SpiderCow!

Thanks to the many great entries this week, you guys rock! Congratulations not only to SpiderCow2010 but to all the finalists as well.