This week's topic is weapons. 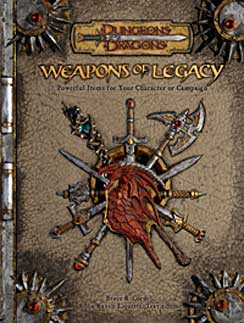 Let's face it, for an awful lot of us RPG fans, the fight's the thing. Back when we used to play "Champions" regularly, we would joke about everything else being a search for the "large open space", the immediate prelude to battle. Few things are as satisfying in the gaming world as grabbing a big double handful of dice to fling across the table, determining just how much damage your Hammer of DOOM! did to the bad guys.

Every system has certain iconic weapons that resonate with you, whether it be your fledgling D&D Fighter's frantic search for a bastard sword -- we didn't know what it was, but it felt delicious saying "bastard" where your mom couldn't hear, and it did wicked damage -- or a strange and burning desire to find Foxbat's ping-pong gun.

So have at it -- what weapons did you most commonly use in your RPG? By no means should you limit it to pen and paper RPGs, either, if there was a special Final Fantasy item that really tickled your fancy, I'd love to hear about it.

For fantasy, did you stick with the basic longsword, or did you prefer to go with the Friar Tuck special quarterstaff, a whip, scythe, or some other more uncommon choice?

What "special" or magical weapons do you remember your characters aquiring? Does your super-powered character have some awesome weapon you think is aweesome?

So have at it, folks, the RPG Corner is open for geeking!