Hero of the Week: Slaughterhouse

The HeroMachine forums on UGO give creative folks like yourself a chance to show off their best creations. From time to time they al get together and vote on the characters they think are the most outstanding, resulting in a "Hero of the Week". I'm going to try to do better about re- posting those here so more people can enjoy them, and to encourage others to post their stuff to the forums. Anyone is welcome to join up (it's free); hopefully others will like your style and nominate one of your heroes.

Slaughterhouse
By The Imp 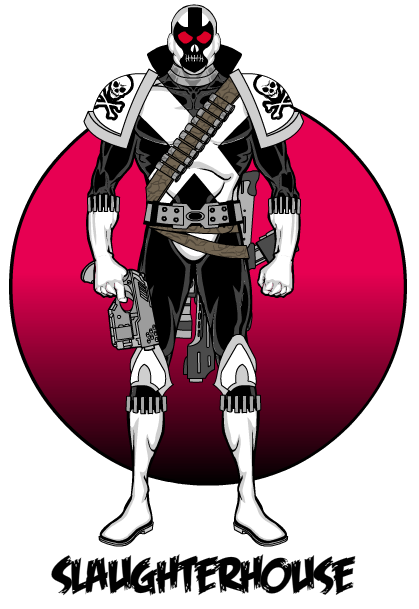 Real Name: Richard Baden
Powers: super-strength, ability to influence emotions in others (specifically, able to create states of extreme terror), radically slowed aging
Bio: Jacob Sarne was a physicist working at a US government installation in Wyoming in the late 70s. He was a brilliant scientist, a likeable guy, and had the love of a good woman. Unfortunately, Sarne's girlfriend's ex, Richard Baden, was the jealous sort... and a just a bit sociopathic. One night this guy broke into the base where Sarne worked and confronted him, demanding that he stop seeing his girlfriend. Sarne refused, and the two fought. During the struggle, a key piece of machinery was damaged, subjecting the two to strange, extra-dimensional particles.

When the smoke cleared, the two fighters also discovered that the woman they both loved had died during the conflict. Each blamed the other, and a decades-long grudge was born...

9 Responses to Hero of the Week: Slaughterhouse