(We've got another guest post from Hammerknight this week in his "Comics Talk" series. Many thanks, HK!)

The Dictionary says; 1. a close friend. 2. a confederate or assistant. 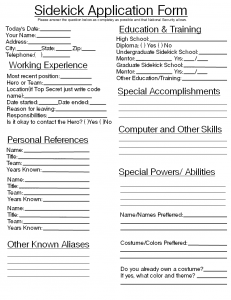 But as we all know a Sidekick is more than that. Over the years there have been many Sidekicks paired up with our Comic Book Heroes. Some famous and some not so famous. If you sit down and think about it, how important are Sidekicks, could our Heroes have made it with out them? What does it take to be a Sidekick? Who gets to name them? Where do they come from? How old is a Sidekick? Why are some replaced and others just fade away? Who finds who, the Hero or the Sidekick? And what is up with some of those costumes they wear?

Let’s break it down, first off, “Could our Heroes make it without a Sidekick?”, that is a very good question. Yes, there are many Heroes out there that do not have Sidekicks, does that mean that they are better than the ones that do have them? The answer to that is “no.” All Heroes get support from someone, be it a family member, a spouse, a Doctor friend, other Heroes and team mates, and yes even the butler is there for them.

So what, you ask, do Sidekicks do for the Hero they work with that the butler does not? Sidekicks can add that little edge that is needed in a fight. They can help cut the Hero free when the Hero has been captured. They can be the bait for a trap. They can create a diversion to help give the Hero the upper hand. And many other helpful things that a person can do that is right there along side of the Hero in the heat of battle.

What does it take to be a Sidekick? It takes a lot, more than some people will ever know. First off, there are some Heroes out there that are hard to get along with. You have to put up with being the butt of the joke and being comedy relief. Most of the time you have to go to school during the day and fight crime at nights, and that leaves no free time to hang out with your friends. You have to be in just as good of shape as the Hero, if not better, in order to keep up with them. You always have to be one step ahead of the Hero, by thinking like them. What helps this a lot is to
have had a life that is almost just like the Hero’s.

Where do they come from? From all walks of life. For the most part, something has happen to their family and they are taken in by the Hero. Sometimes they are big fans of the Heroes and somehow find out who the Hero really is, leaving the Hero with no choice but to take them on as Sidekick. Being born into the family business is another way. But that doesn’t always mean that both parents are Heroes, in some cases one of the parents has been a Villain, but that doesn’t make them any less of a Sidekick. We all know things happen.

How old is a Sidekick? That can be hard to say. Back in the day they were both young and old. Some would start as a young kid that is taken in by the Hero and trained to fight crime. Others were good friends with the Hero, and sometimes even an old partner from days gone by. You have to ask yourself, how young is to young? For the most part the Sidekicks are like the Hero’s kid, and they won’t let their kid start up if they are not ready to. Would you? Now days you have to think about the laws, what would the Child Protective Service do if they see a Hero out fighting crime with a ten or twelve year old. There would be some trouble. A kid can’t even have a part time job without being over sixteen these days. And to take it in the other direction, how old is to old to be a Sidekick? Does a Hero want their Sidekick to be older then they are? Do you really think you would see someone like Green Arrow having his Granny be his Sidekick? Now nothing against Granny, she could probably out shoot him blind folded, but come on, she has already had her time to shine, let the young ones take over. Besides, she is out kicking it with Grandpa.

Why are some replaced and others just fade away? Over the years there have been Sidekicks replaced by a younger Sidekick. This happens when the first Sidekick has moved up and became a Hero. Where did you think Heroes come from? Or that the first Sidekick has had enough of the business and wants to move on in life. One of the sad ways that a Sidekick is replaced, is when they are injured or sometimes killed in the line of duty. Let’s all take time now and bow our heads to pay respect
to all of the fallen Sidekicks and Heroes that are no longer with us. Okay, some Sidekicks just fade away. There are a lot of reasons why. One of the reasons is that the Hero could not bear to replace them after something has happened to them. Another one, is that they have moved over to the Dark Side. Sorry couldn’t help it, they have become Villains. Not wanting to name names, some have had personal problems, like drug addiction.

Who finds who, the Hero or the Sidekick? It has happened both ways. It makes you wonder sometimes if there is a school out there for both Heroes and Sidekicks. Do they have to apply for the job? Could you see the Application for a Sidekick job? Well I did (in my mind that is) when I started to write these. I was thinking it would be cool to make one up and to share it with everyone.

What is up with some of those costumes they wear? Does the Sidekick supply their own costumes or does the Hero? You know that the costume will have to match, in ways, the Hero’s costume. Makes you wonder if the Hero is looking for a mini version of their costume or just something that will help make their costume look better. Some of the Sidekick costumes yell out”Hey look at me, I’m a Sidekick.” While others can stand on their own. Would you want a Sidekick’s costume to be a mini version of yours, a stand on it’s own, or one that would compliments your costume? And if you were the Sidekick would you want a say in the matter?

I hope that everyone has enjoyed what I have to say about Sidekicks. I would love to hear what you think, so post some comments and be heard.

This entry was posted in Randomosity, Recipes. Bookmark the permalink.