Despite being the Greatest Generation, the people of the 1940s were irredeemably stupid. At least, the ones in comic books were, because while Captain Marvel was the most popular super-hero in the world, no one ever suspected that he was also Billy Batson, an ace radio reporter and young boy despite scenes like this: 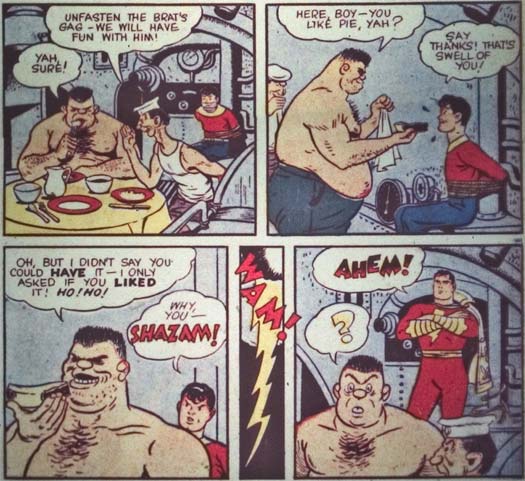 Young Billy Batson is the only prisoner on a submarine, right behind two of the bad guys. Suddenly a blinding, booming stroke of lightning hits -- underwater, mind you -- and the World's Mightiest Mortal abruptly appears in young Billy's place.

And yet, no one figures out they are one and the same.

This room is, tops, ten feet by ten feet. After the flash there is no Billy Batson. Where did the young man go? Was he perchance whisked away with the speed of Mercury to another room, without opening the bulkhead or letting in water to the sealed submarine? Who cares, there's pie!

Billy had a bad habit of becoming Captain Marvel in situations where only a moron wouldn't notice they were the same guy. Perhaps the wisdom of Solomon let him know that pretty much everyone was a moron, because he did it a lot: 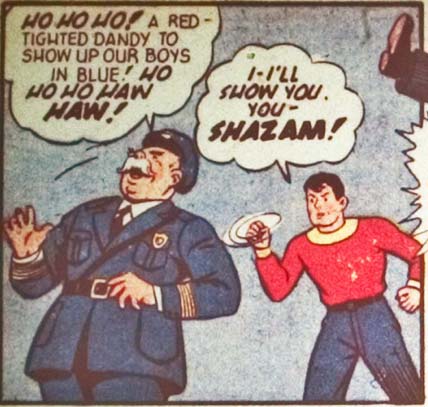 He's upped the ante here by shouting his magic name and transforming in the same spot from one identity to another in a stroke of lightning right behind the police chief who is there to arrest him! They have got to wedge a "B" into his name somewhere for the "Balls of Ares", because that kid can flat out bring it.

Speaking of which, you might remember this gem from the other day: 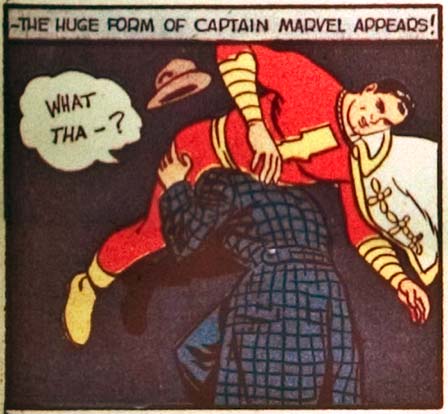 Billy has cunningly waited until he's being carried over the villain's shoulder to blast himself into his alter ego, because surely the criminal would never suspect that the boy who instants before was being toted along like a doughy mailbag is in any way related to the Big Red Cheese now weighing him down.

Secret identities have always been one of those things that make sense only if you don't think about them for more than two seconds, but at the beginning the abuses of the conceit were even more egregious than Clark Kent disappearing whenever Superman was around. They just out and out didn't give a crap back then -- Billy changed into Captain Marvel and people didn't notice and that's it, we're at war, buster, don't you go around questioning things!

It's a damn good thing the people populating comics weren't running the country, because we'd all be goose-stepping and riding around in ninja tanks about now if they were. Idiots.

5 Responses to A secret poorly kept