In lieu of my usual "Bad Costume Wednesday", I wanted to take this chance to show you some of the stellar outfits I saw while at Dragon*Con this past weekend. I was really blown away by the time, dedication, hard work, and imagination people put into assembling these costumes. What struck me the most was not only how good they looked, but how much fun they were having. Almost without exception, they were eager to stop for pictures, and were happy to strike the most super-heroic of poses.

When you see comic-book clothing brought into the real world, you're immediately faced with problems you never have to consider when you're just drawing lines on a page. How do you hide the seams of a soft boot top as it joins with the shoe? Where does Flash's zipper go? How do you keep a cloth face mask from slumping off your cheeks? These guys and gals have dealt with all of that and more (don't ask me how they go pee, for instance, I'm pretty sure it involves some sort of complicated AMA-certified device).

So without further ado, I bring you the Best of John and Jeff's Magical Mystery Dragon*Con Tour in photos.

The first thing to strike you is that even for a given character, you have a whole huge history from which to choose an outfit. For instance, this guy chose to go with an old-school Adam West television show Batman, and pulled it off brilliantly: 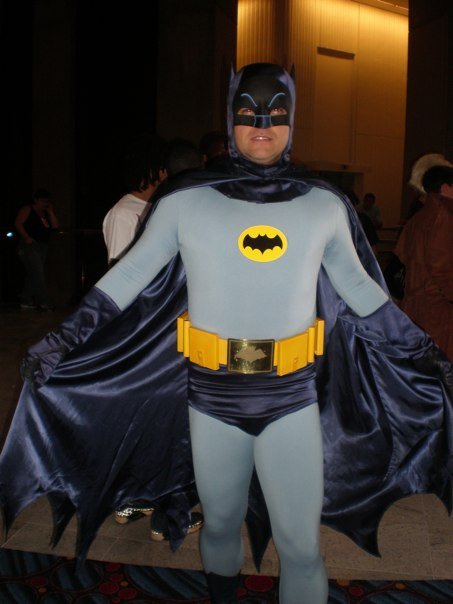 He's got it all, from the paunch to the big square utility belt to the colors and little bat ears on the cowl. Attention to detail matters when you're doing something in real-life as much -- or more! -- as it does when you're creating an illustration.

Just as impressive was a Batman from another era, specifically the Michael Keaton-era Batman movie: 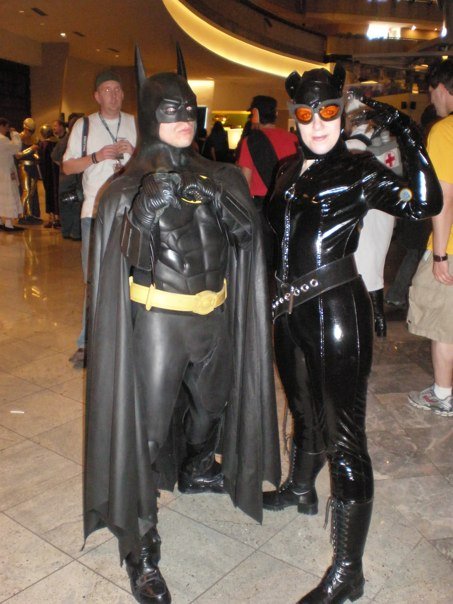 I didn't get a chance to talk to him, but I wouldn't be surprised if a significant portion of that costume was store-bought, it was just that perfect. I particularly like the pose. And the fact that he brought Catwoman along with him, thankfully without having to sit through her film. Well played, sir.

Another Justice League-er was the first one that made me stop and take a photo. I've got a fondness for The Flash going way back to my ill-spent youth, and this guy nailed the costume. From the perfectly placed mask to the high-water lightning bolts on the arms to the head wings that actually didn't look stupid, I was really impressed with this one. 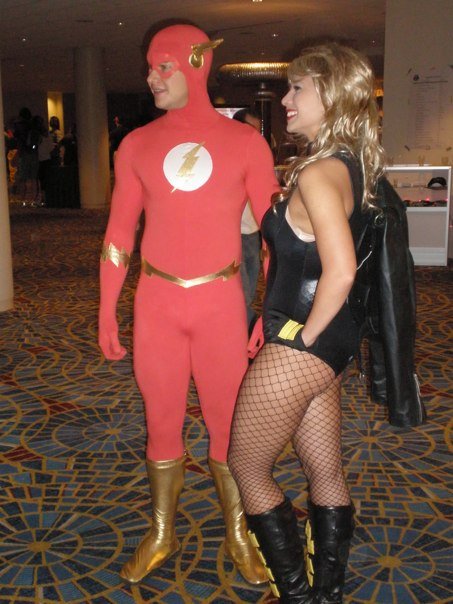 Again, notice how he brought his very attractive girlfriend with him in costume. In hot costume. She returned the next day, too, in an even hotter "Starfire" outfit that almost caught the place on fire: 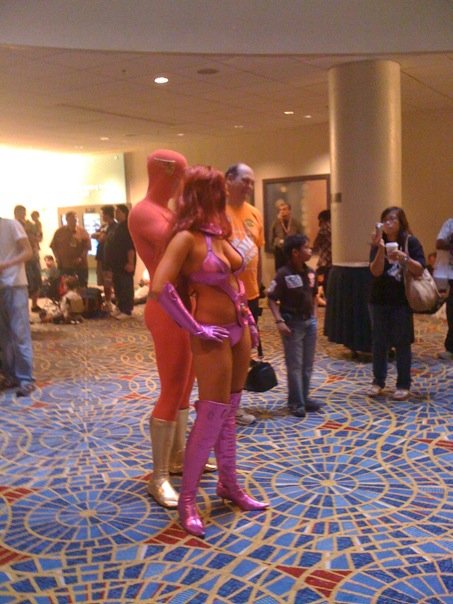 Continuing our tour of the Justice League roster, we turn to the Greenies, Green Arrow and Green Lantern: 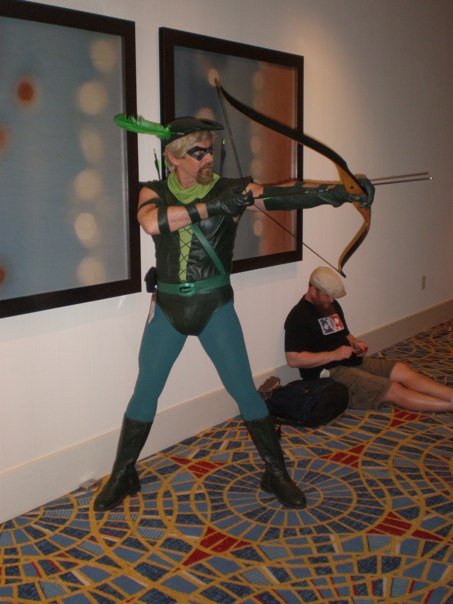 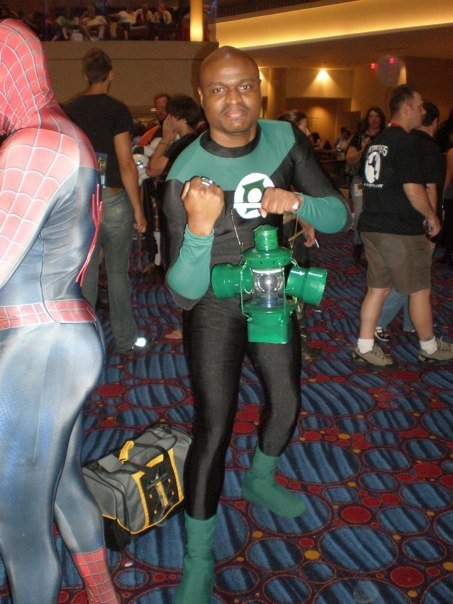 The right green makes a world of difference with those two, particularly GL. A couple of alternates were running around that missed the right tone and the result was ugly. One guy looked more like the Green Vomit.

We'll finish off the DC characters with a return to the man-woman theme and everyone's favorite cousins: 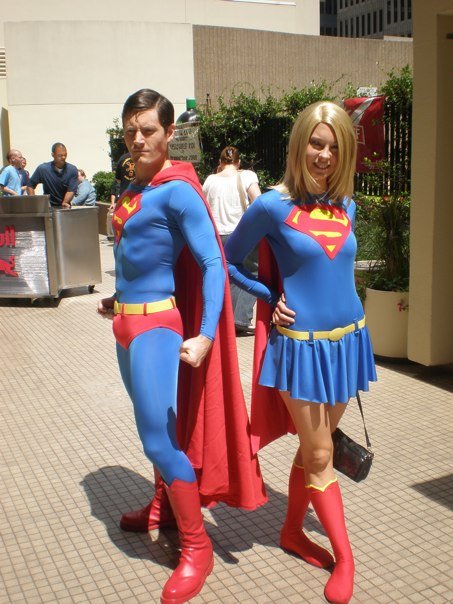 None of the various Supermen were all that beefy, which is fine with me -- I never really liked the Kryptonian Bodybuilder concept. I have to say, though, you've got to be pretty confident in your manfulness to wear skin-tight briefs like this. Seriously.

Moving on to Marvel, several folks got their friends together and came as a team. The coordination issues alone boggle my mind. 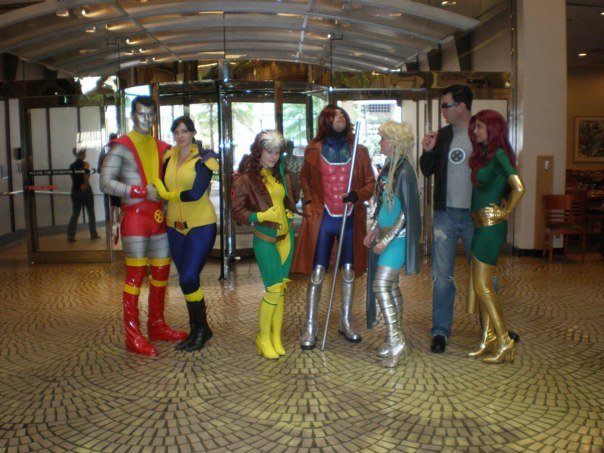 These guys represented old-school Avengers well, although perhaps as a bit long-in-the-tooth. Particularly Vision, who as an android should be able to keep it tight pretty much forever. Sill, they were a cute couple and I definitely applaud their willingness to geek it up later in life. May we all be so lucky! 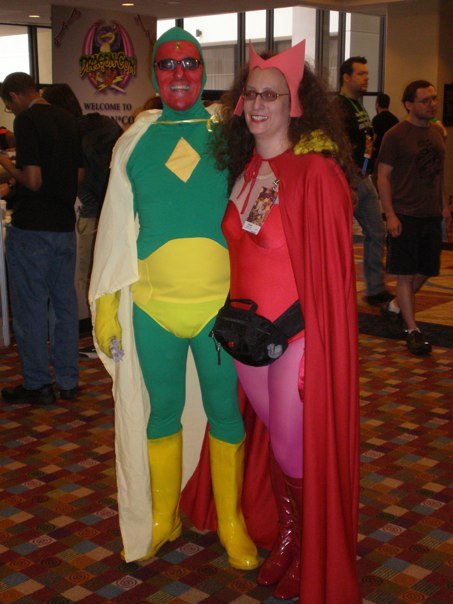 In the "Least Likely Crossover" category, we have an incredible Hakweye costume and a very good Deathstroke: 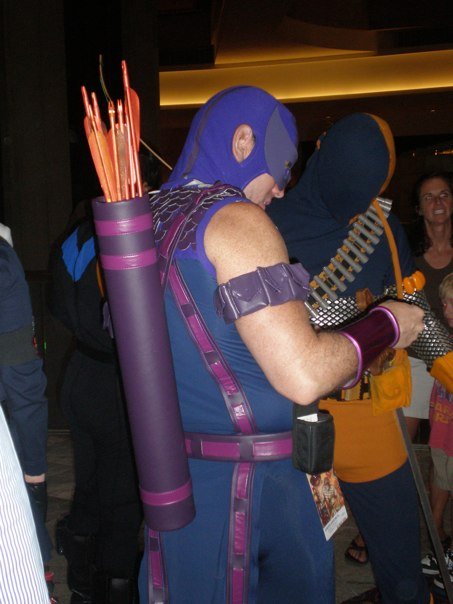 I really wish I'd gotten a better shot of Hawkeye, I don't know how this guy put his costume together but it was really spot-on and totally convincing.

When I saw the next "team", I had several reactions. First, I wondered how I could swing it so I could show up at a major convention wearing a bathrobe and slippers. And second, I thanked my lucky stars the Dr. Manhattan guy decided to go with the "with pants" version. Whew! 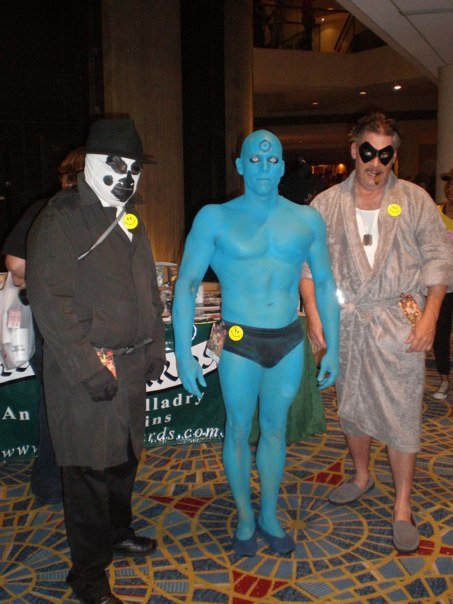 Other non-super-hero genres were well represented too, of course, including two of my favorite pulp-era characters, The Phantom and The Shadow: 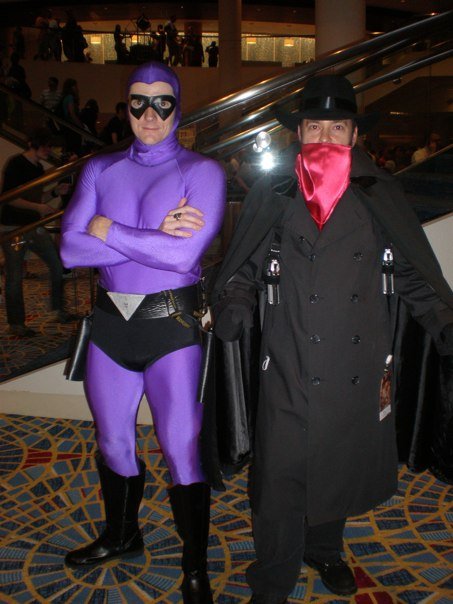 Sword-and-sorcery folks were out in force, from your Conan wannabes to this delightful creature, who I couldn't bring myself to ask about pinching when combining chain links with nipplage: 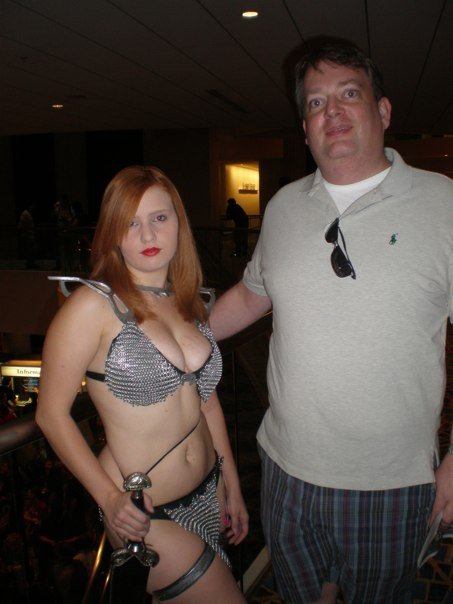 I wondered if this next guy really thought through his costume. You have to cross a lot of streets, with a lot of oncoming buses, to risk putting on a red Star Trek shirt ... 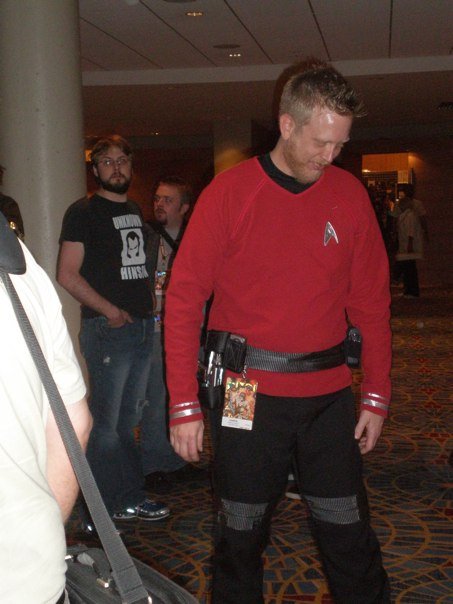 Finally, it wouldn't be a geek convention without stunning examples of Princess Leia in her slave outfit, a staple of every hot-blooded young male nerd's fantasy life: 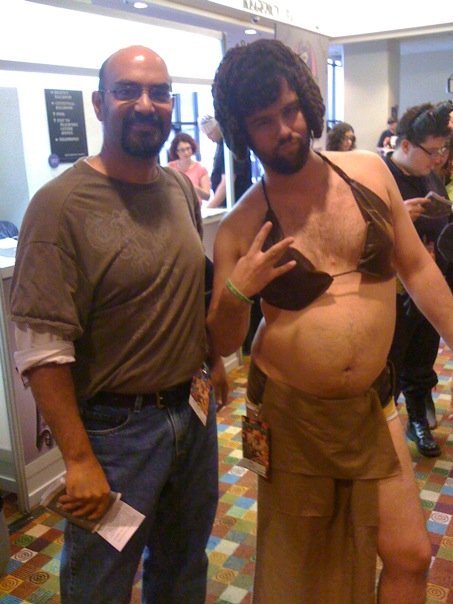 You know, it's funny, but I remember her being a lot hotter than that ... ah, here we go! 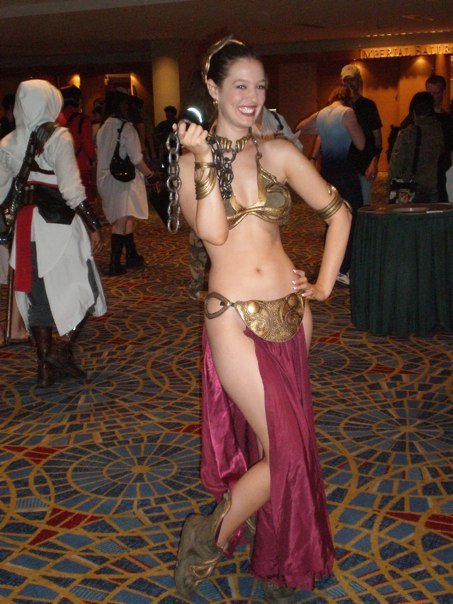 We had a great time, I can't thank my best friend John enough for putting me up and showing me around. The Patrick Stewart panel was fantastic, we had a great hour listening to Darwyn Cook talk about his career and the industry, and the costumes and geekage were simply outstanding. We're thinking of going back next year and putting up a HeroMachine booth (assuming I am still employed by UGO then) and setting up a big projection unit with a computer so people can see characters being put together. We'll see how that works.

Hope you enjoyed the photos, and next time you're assembling your HeroMachine creation, think about how it would look in real life strolling around downtown Atlanta!