Mechanics of Creation BONUS!!! A DamienBlog

That's right, today is a BONUS Mechanics of Creation, requested by Whit and seconded by RSC5 within literal seconds of each other. So any brain damage or seizures should be blamed on them. I don't know if they have a really good RSS feed or if they're stalking me. But either way, I am bound by the rather fuzzy terms of my contract with Jeff to write about whatever the dwiddle I care to, so here we go!

(Edited to add: Hey you two, I am so sorry that it turned out like this. I had no idea it would grow into this abomination. Forgive me?)

Today's subject is going to be MASKING. Apparently there's a whole lot more people having trouble with this  than I thought, and certainly others who must want some pointers. So I'm going to tell you a little story about a guy named Mr. Blank. Blankey here is a normal guy who wants to be a cool superhero like Ratman, The Green Batterin' or Sliderman (patents pending.) But he has no way of doing all this without a spiffy costume, so it's time for Queer Eye for the Superhuman Guy Damien's Masking Tutorial! 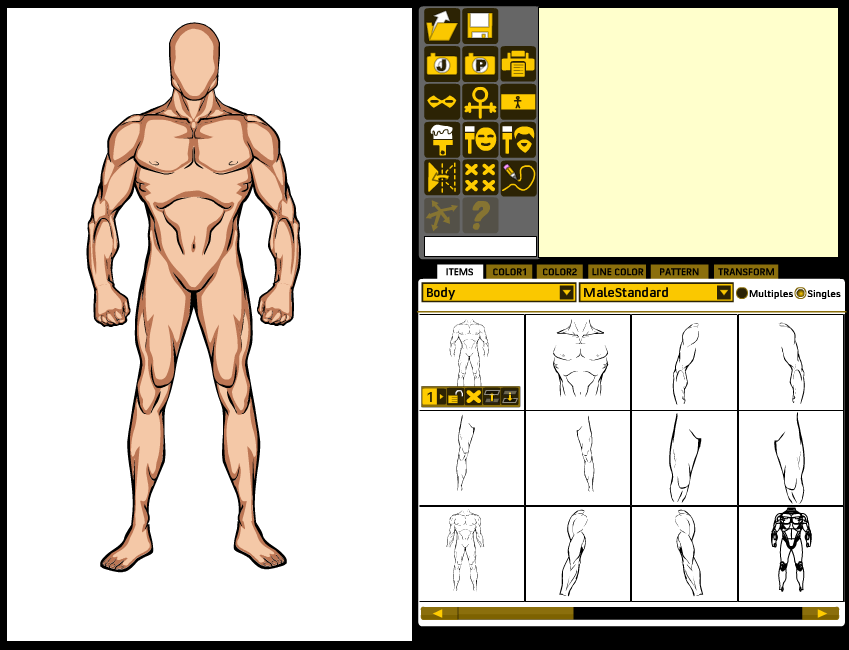 Be sure to click on these images! They're much more detailed than they appear!

Here we have Mr. Blank in his natural form (standard male body, hands and feet, with a  head at 120%) waiting to be dressed in the finest hero duds he can buy for fifteen dollars and a bus pass. He insists on starting out with the classic hero tights. But he must have been reading some Rob Liefeld garbage, because he insists on having his tights armored as well. Armored tights being something I don't have in stock, I peek in the back room to see if there's something I can wing it with. And I DID find something...It just happens to be 150% larger than he is. So I'll have to trim it down! 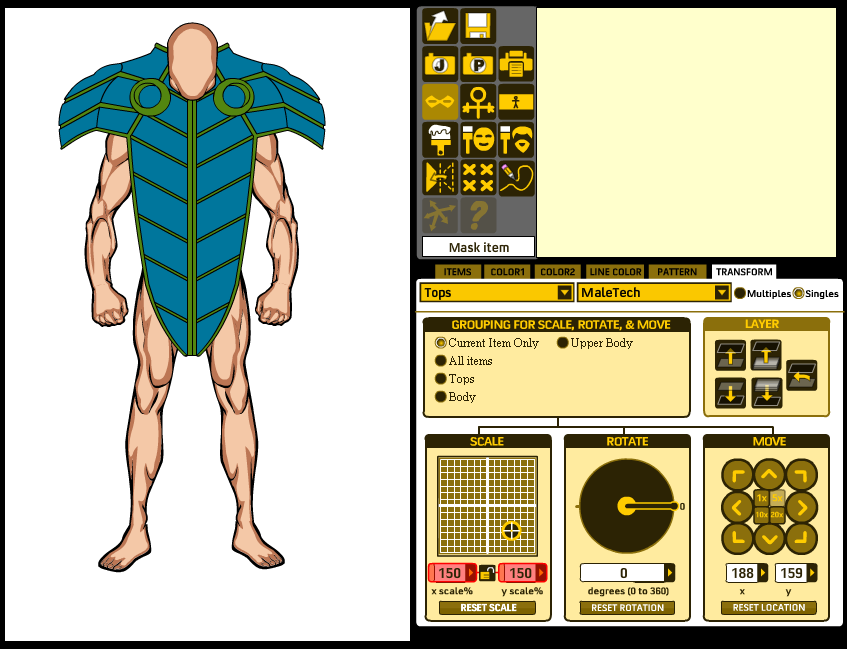 "Not to worry!" I reassured him. "I am the Number One go-to guy in town for hero costumes because I can MASK!"

"What's that?" he asked incredulously.

"It's this great technique I learned," I began. "I simply find the item I need and put it over the part of you that needs covered! I click it FIRST to make sure it's the item I need. SECOND, I click the Mask button. The THIRD thing I do is click your arm there, and PRESTO! You have armored speedos." 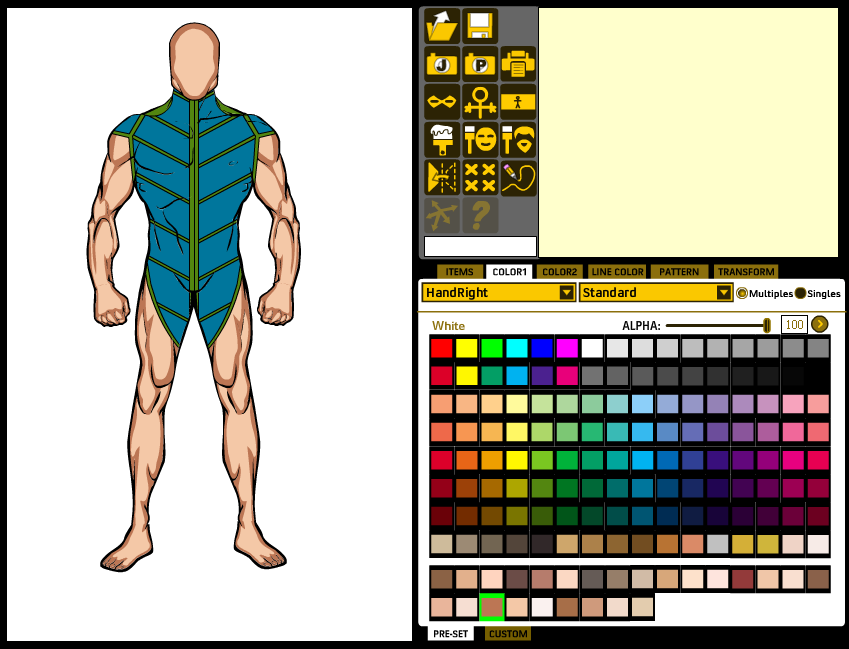 "Wow!" he exclaimed. "it fits tighter than a glove! And the armored part is digging into my--uh--ouch, it pinches!"

"I'll see what I can do about that later," I answered distractedly. "What did you want next?"

"Well," he pondered thoughtfully, "I wanted some big puffy sleeves!"

I tried to keep the disbelief from my face. "B-big puffy sl-sleeves?" I stammered.

"Yeah!" he shouted, getting more excited. "Great big ones!"

I sighed and tried to balance my professional pride with the need for this ignorant man's money. "All right, hold this." 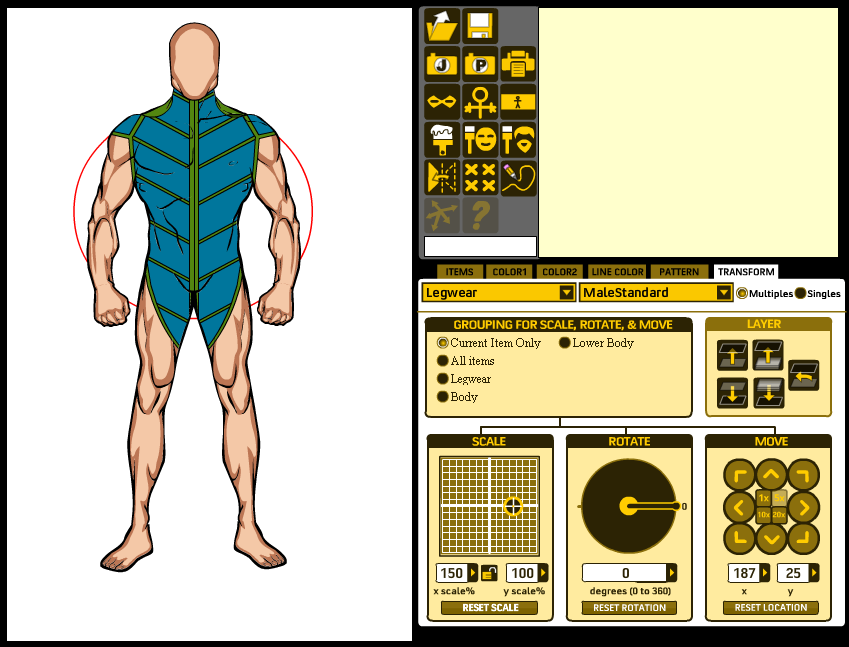 He stared at the giant red-rimmed oval I handed him. "What am I supposed to do with this? Toss it like a frisbee?"

"No, you stu--I mean, of course not, honored customer," I smoothly recovered. "I need you to hold this behind your shoulders so I can mask your giant sleeves." I was sure I'd kept the disdain from my face as I said that, but the look on his face suggested I might want to be more careful. "Now, you hold that there , just touching where your speedo shoulder ends, while I get a pairs of pants."

"Because that's the only thing I have big enough to make giant puffy sleeves!" He grew quiet after that.

When I came back out he was back to his sputtering. "Why would you need pants that big?" he stammered. "They're the right length, but they're 135% too wide!"

"Relax," I suggested, wishing I could relax. "I just need the bottoms, they should be the perfect size." As I carefully lined up the pantlegs to the armored tights, I found just the right place--right over Mr. Blank's face. 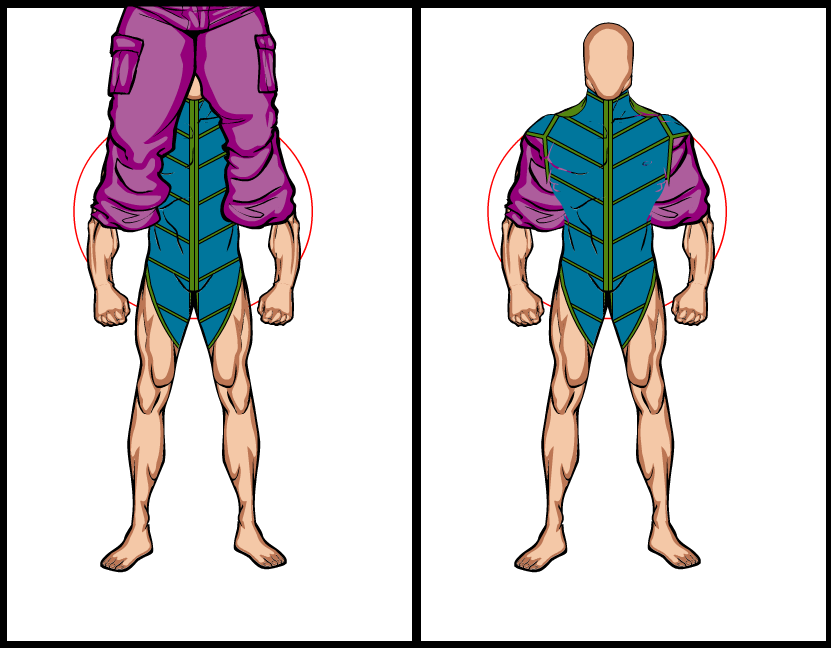 It had worked just as I'd said. Granted, it wasn't work I was proud of at this point, or work I wanted my name attached to for people to judge me by. But he had giant sleeves. We argued briefly that they were a little more floppy and puffy, but he conceded the point when I reminded him how much he was paying.

"Okay!" He was getting exuberant now. "I need some boots. long ones, like...thigh-highs! Thigh-high boots, and in the same shade of purple!"

At this point, I excused myself ostensibly to find his thigh-highs but really to find some antacid. My stomach wasn't feeling very well at the moment. And sure enough, in the back I found some brilliant lavender parade boots from some marching band. I brought them out, but he wasn't satisfied. No, of course he wasn't.

"They need gilding," he demanded.

"Gilding?" I asked, sickened and astounded.

I stomped off to the back room for something I could use as gilding. And sure enough, I found some polished brass something-or-others that were 200% bigger than I needed. I also grabbed a red and white pair of thigh-highs--just because I wanted to rip out the man's larynx was no reason to do an unprofessional job, after all.

"Why are you bringing out extra boots?" Mr. Blank inquired imperiously. "I already have these purpley ones, and I don't need any more! Why would I wear two pairs of shoes at the same time?"

I thought for a moment, reflecting that with that attitude, maybe he hadn't been reading Rob Liefeld comics after all. But his nagging voice broke my concentration.

"I'm sorry," I attempted to placate him. "I was just thinking ahead to the next phase of our project, that's all." He only seemed a bit mollified, so I rushed forward. "They're to mask your gilding, of course."

"Why do you need to do that?" he asked brusquely.

"It's so the gilding actually stands off of the boot, Mr. Blank," I explained. "It will give the brass additional depth and look much more spectacular." I could see that he doubted my words, but he let me continue. "Now FIRST, I click on the gilding on the right foot, SECOND I click the Masking button, and THIRD I click on the corner of the red and white boot. I repeat the process on the left and PRESTO!" 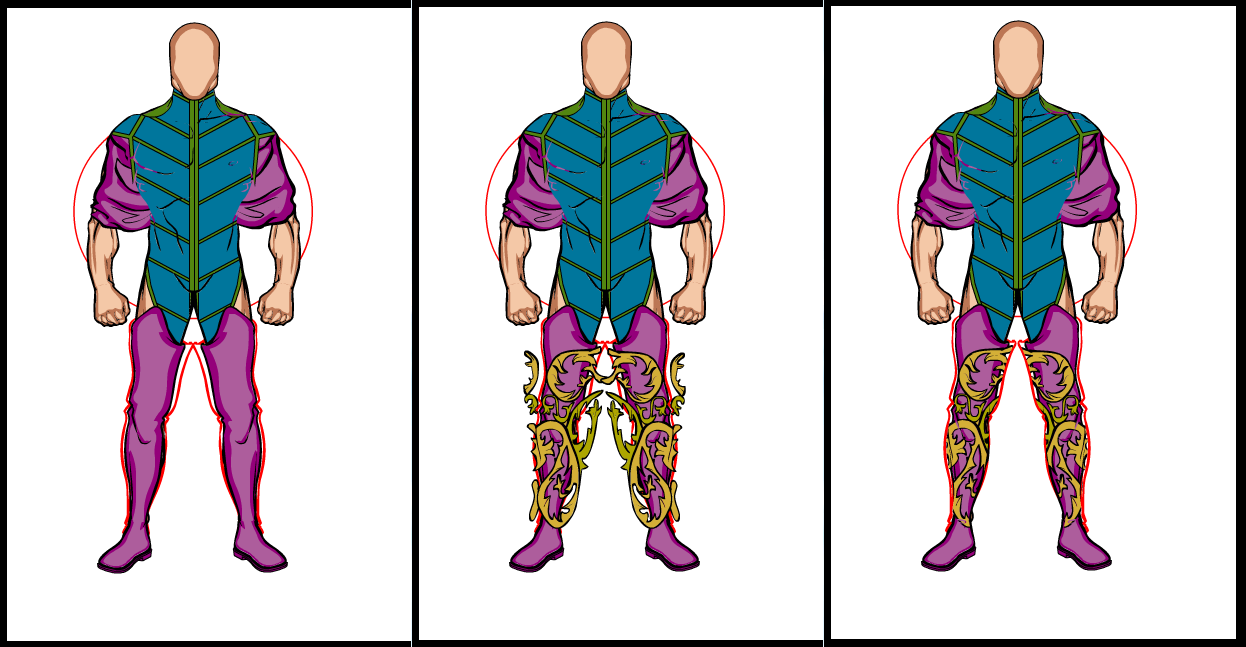 "You have the fanciest hero boots in town," I told him. I just didn't mention they were also the ugliest.

"A cape," he murmured to himself.

"Say again?" I asked in shock.

"I need a cape! A long and billowy one, with an insignia!"

"And what is your insignia?" I asked despairingly.

"A tree," he announced proudly. "Like the oak, I stand firm against the winds of wrongdoing. Like the pine, I am watchful year round, never ceasing. And like the willow, I shall deal out my harsh punishment to injustice!"

"One tree coming up," I said as I dashed into the back room again, where I immediately emptied my lunch into the sink. But he was a customer, so I went looking.

I came back in a few minutes later with a cape and a tree. "Will these do?" I pleaded wearily.

He looked up. "Oh, yes. That will do, I guess. Whatever." Like he hadn't just been giving that terrifyingly lame speech. So I affixed the tree to his cape.

He started at it for a moment. "It needs to billow," he commanded. "I told you to make it billow!"
And so I FIRST clicked the tree and SECOND clicked the Masking button and THIRD clicked the cape, and the tree folded around the edges enough to satisfy the cretin.

"And now I go off to battle INJUSTICE!" he hollered as he dashed to the door.

"Wait a minute!" I called. I grabbed a purple helmet off the bargain shelf where it had been gathering dust. "I need to turn those red lines white or someone will see them! And you'll want this to protect your secret identity!" 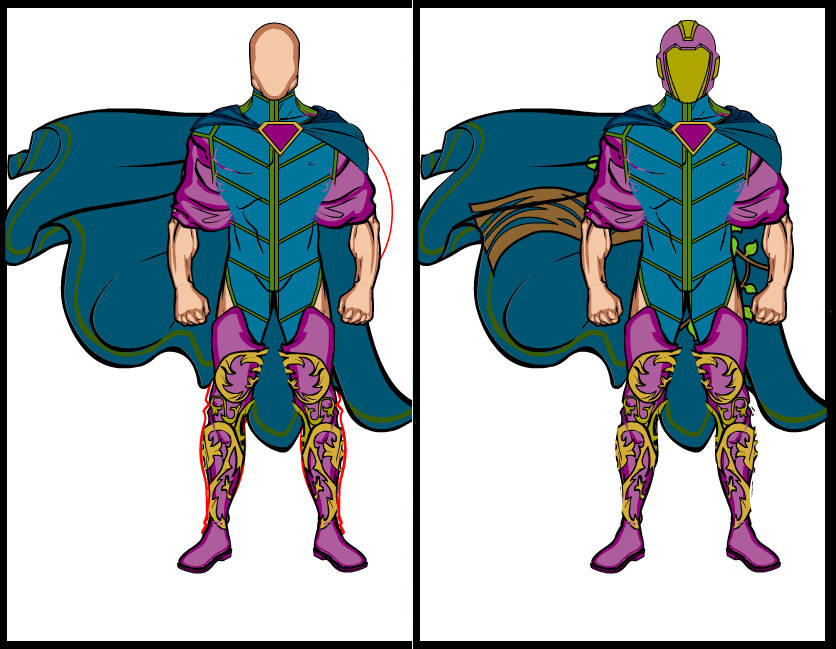 "By Jove you're right!" he exclaimed and shoved the helmet down over his ears. He struck a pose. "How do I look?"

"Like no one I'd want to meet in a dark alley, that's for sure," I answered truthfully. "Now how about you go out the back door so no one sees you leave here? Wouldn't want...um...anyone to know where you get your supplies!"

"Wait!" he bellowed. "I must have a weapon with which to fight evil!" He snatched a heavy mace from the bin next to the office door. "May I use this?"

I guess if you know how," I began, but he inturrupted.

"Yes, yes, I think I've got it!" he shouted triumphantly. "FIRST, I put the mace over my hand and click it to make sure, SECOND I click the Masking button and THIRD I click my hand!" 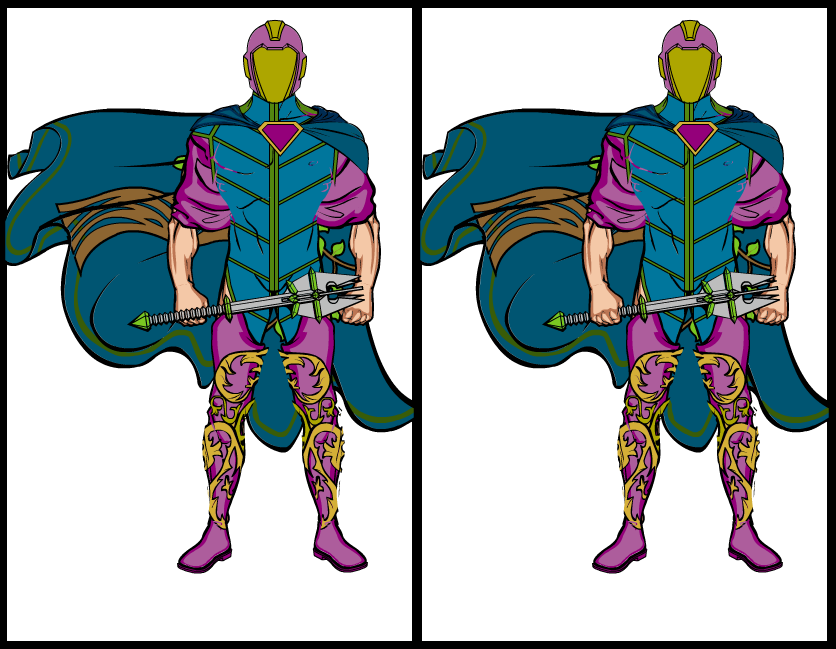 "Hey, it looks like you got it!" I congratulated. Personally, I hadn't thought the dim bulb could have managed it by himself.

"Indeed, good sir! And all thanks to your teachings!" he bellowed as he ran the opposite direction; I heard the back door slam shut.

"Yep, he's gonna get mugged in about ten minutes," I groaned.

I was halfway back to the register before I realized he'd run off without paying.

14 Responses to Mechanics of Creation BONUS!!! A DamienBlog