Mechanics of Creation 2: “What You See”

Time for the latest DamienBlog! Today we're going to look at the idea of "What you see isn't what you get." Now, for many of you who've been with this site for awhile (especially you contest finalists!) there's a certain familiarity with the program that allows you to make stuff up from items that weren't intended. Now, I'll help pass this idea on to those who may be struggling with it.

This program is magnificent so far, and always getting better, because of the ability to put items in places they wouldn't be immediately suspected of going. A common example of this would be using a glove component, perhaps mechanical in some way, as a leg with the appropriate resizing. But there so much more you can do by stretching your mind to encompass everything you can create! With the proper coloring, you could use facial hair to mimic a feathered or scaly portion of your character, like Goldfeather here: 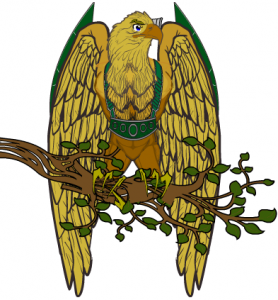 This eagle was made from scratch. The head is from HeadsAnimal, the wings are from BackplaneWings, the rest cobbled together from various categories and sized to fit. But the beard from FacialHairStandard was an almost perfect match to continue the feathering texture already shown on the eagle's neck. (I could almost imagine Jeff using the same origin point for the line-art--it's literally almost perfect.) That "feathered" look was enough for me to create the illusion, coupled with proper coloring, of a bird leaning forward as birds do. As always, seeing it from this perspective makes me think of the changes I would make if given a second chance, like squeezing the ones underneath horizontally to give an even more accurate impression of "receding backwards," but it works as-is for now.

Don't forget to click on these or open them in a different tab, because there's a lot of detail you can't see when I shrink them down like this! Another perfect example of "not intended for" is this example of mine from the "You, Robot" contest a few weeks ago.  The Aero-Bot was an obvious rip from Transformers, but I was interested in seeing if I could pull off a decent transformation sequence. It was a middling success, considering the inevitable browser crash kept me from completing his third stage, where his arms and legs would have been more visible.

At any rate, by first building the jet fighter, I was able to see what parts I would need to highlight in the transformed robot, such as the jets, the back flaps, the forward fuselage. (The fuselage, if you're unfamiliar with planes, works much the same as "hull" does for ships; that is, the outer skin of the main structure.) I used one of the TopsTech for the forward cone, and repeated the part in the unfolded finish with some masking to conceal the "upper chest" portion of the Top itself. The arms were masked and flipped versions of the mechanical spider legs  from BackplaneStandard, the legs from FootwearStandard, and the rest was simply chosen and colored to fit the original jet. The swoosh I added for the "comic book" effect, but that was simply two moon-shapes from BackgroundStandard layered and colored to pose as a swoosh. (The upper one is actually colored green, not transparent--I needed the coloring to match the edges of the lower one, which IS alpha-tweaked. A slight leftward motion of the bottom half was enough to bring the glowing edge out and create a gradual increase in size for the outer edge's appearance.) Now this flamboyant fellow was another story entirely.  Aside from having only one digital appendage (a right hand) he sports a favorite of mine: enhanced flame effects. His four limbs are actually spouting red-hot hair from HairZombies. With the proper coloring and masking, you can create any number of unique and curlicuing tongues of flame. I also customized the helmet with a pair of triangles to create the distinctive V-shape. The glowing circles were just for fun. Also note the aforementioned "using a glove component for upper leg" trick.

However, my most giggle-worthy addition would be his giant, flaming firefly butt! (That was an enlarged blaster from GloveStandard turned backwards.) The flame effect there was actually three--the flaming-hair from HairStandard, the fireball from InsigniaTech and an oval-masked fluffy hair from HairStandard. Put them all together and you have quite the pyrotechnic display. But this little guy may just be my favorite example. A finalist for the "You, Robot" contest, the Digbug is certainly my cutest example of "decide what you want and make it happen." This may have also been the first contest entry with what I'll call an "interactive background." (This is a vague supposition on my part, though since it was one of the first entries in the contest, I think I'd beaten everyone else to the execution of detailed terrain.)

The little steam shovel was made out of nothing but Insignia shapes, the tree was made out of Insignia shapes (and patterned), the bushes were made out of shoulder pads, and the rain was layered Bandage patterns. Though Digbug didn't win, Jeff praised the innovation and left a smile on my face for the rest of that week. Digbug now sits on my desktop and brings a slight cheer to me whenever I reboot.

I do hope that my using my own artwork hasn't sounded like bragging to people. While I could use other people's artwork, I am obviously most familiar with my own, and have intimate knowledge of the thought processes that go into them. I'm attempting, with these articles, to give insights about bending this program to your intentions rather than feeling forced to accept its current limitations, or limitations that aren't even there. So I hope I've done a little more of that today.

I'm not sure yet what the topic is for next Thursday yet, but Violodion has requested a blog on "Poses for the Head-on View," and by golly I'm gonna deliver next Saturday. So be sure to tune in one week from today and find an extra-special (and extra-researched!) blog for the posing-challanged! See you then!

14 Responses to Mechanics of Creation 2: “What You See”