Retroview: The Life of Captain Marvel

These random comic book baggies are strange. Sometimes I can go through all ten and I get nothing worthy of comment, just a big pile of meh. Other times, one issue is so chock full of great, mockable items I almost can't believe it. A case in point is "The Life of Captain Marvel", a 1985 reprinting of Jim Starlin's 1968 "Captain Marvel" run: 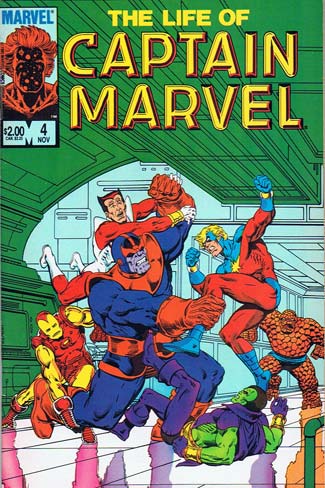 The careful reader will notice that this cover sucks. You've got Thanos, cosmic villain, standing in a hallway wrestling with five major Marvel characters in what is, judging by the comical way Iron Man and Eros are posed, a tryout for WWF Smackdown. Honestly, does anyone actually use that whole "Trip 'em by the shin!" move? I do have to give mad props to Destroyer for attempting to kick Thanos in Party Town, though, that's pretty gutsy. Sadly, Titans keep the family jewels in their chin, as you can tell from looking closely at Thanos. Better luck next time, Destroyer.

I didn't realize it at the time, but this was Jim Starlin's first penciling assignment for Marvel. He got his start with the on-again, off-again Captain Marvel, the huge successes of his career still years in the future. Knowing that helps my scorn for these issues a bit, because let me tell you something, they're gut-wrenchingly bad. I put some of the blame for just how awful this run is on writer Mike Friedrich, as the bizarre artwork is only matched by the over-the-top purple prose flung at us like a particularly fresh batch of monkey poo.

Part of what makes it so bad is Friedrich's over-reliance on similies. And not just any similies, but ones that apparently were purchased at the Discount Similie Super-Store. To illustrate my point, enjoy this progression of panels which appear mere inches from each other: 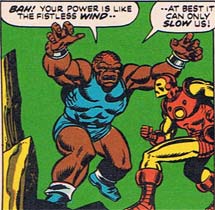 I don't even know what the hell that is supposed to mean, despite the explanation in the second word balloon. Just thinking about it makes my brain hurt. I mean, does the wind ordinarily have fists where this guy's from? And if he can be slowed by a stiff wind, how in the world is he capable of bringing Iron Man down?

Oh, and here's a tip for you aspiring comic book writers out there: If you have to explain what your similie means in the very next dialog balloon, it's a crappy similie! You can write that down, kids.

Then we're treated to a twofer, because sometimes just one bad analogy isn't enough: 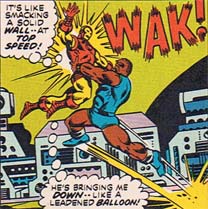 To make it even better, both similies require the double hyphens and further clarification, in addition to each needing further clarification by yet another separate similie. It's a rare example of double-explained, double-interior-exterior similieating, and quite the coup for Mr. Friedrich. Plus, do we really need even one analogy to get the idea across to the reader that the ape-guy just hit the metal-guy really hard? Isn't that sort of the point of art, to, you know, show us what's happening? 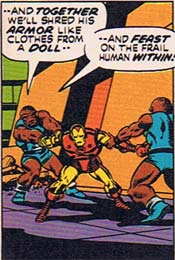 I sure hope "Feast" in this sentence means "Let's actually consume his flesh" and not whatever else is implied by stripping the dude to his skivvies, because honestly, I shudder to think of our hero's naked fate in the hands of two guys who strip their dolls often enough to use the concept as a casual metaphor. That's pretty creepy.

Unfortunately, judging by the next panel I don't think Tony's going to get off as easily as just being the main course at the Cannibal Cruise Line's Buffet:

I dont' know about you, but if I were in that situation we'd be having a major fluid leak in the Iron Man Underarmor region. Somewhere, I can hear the music from "Deliverance" ...

The remainder of the stories in the compilation deal with Thanos' inane plan to become a God and kill everything in the Universe as his gift to Death, with whom he's in love. He's already got this Cosmic Cube device which literally grants any wish he has, and yet we're subjected to endless pages of the heroes gathering to fight him, only to be instantly teleported to him where they're instantly captured, only to be instantly teleported away where they are forced to fight these Thanos-built concrete gargoyle-like constructs, at which point I had to put the issue down before I beat my head to a pulp against my desk.

You know how sometimes, when you're reading a comic book or watching a movie or tv show, you think "Are the writers just jerking us around?" You're never quite sure, and you hang on just in case the whole thing is on the up-and-up, but you also never really lose that feeling like someone involved with this project is laughing at you.

When the concrete gargoyles show up and Captain Marvel says:

"By KREE_LAR! This confirms my suspicions about his SANITY! Instead of simply BLASTING us into oblivion, Thanos is CREATING from the metal and concrete of the floor -- DEMON-LIKE CREATURES whose only purpose can be to cause ... OUR DEATHS!"

I had my confirmation that, yes, the writer knows how stupid this is and he just doesn't care.

Why doesn't Thanos just nuke 'em all into non-existence with the Cube? Why does he need to bother wishing himself into godhood, when he can already do everything with the cube anyway? Why are we subjected to dozens of pages of completely, utterly pointless "action", when with an idle thought from Thanos this would all be over? I mean, just think of the hours Jim Starlin had to waste lovingly inking Captain Marvel's buttocks in this panel: 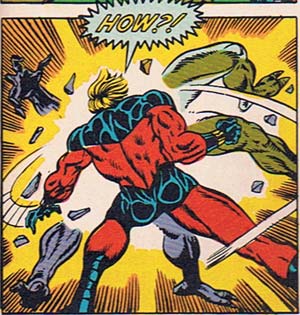 Anyway, suffice it to say that had I been reading this run in the Sixties, I never would have guessed that Jim Starlin would go on to such a stellar career, particularly his legendary run on Adam Warlock. But it's hard to put the art in context of his later work, and in light of the truly, epically, wretchedly bad writing by Friedrich. I've taken a few writing classes in my day, and here's another free tip for you, which apparently they don't teach at the Marvel School of Writing Like Stan Lee Only Not As Good:

"If you ever find yourself in the middle of a story writing the words:

Stop, use the "BACKSPACE" key repeatedly until those words are no longer in your story, and then proceed."

Finally, I want to leave you with this image from the back cover of the reprinted edition, by an unknown artist: 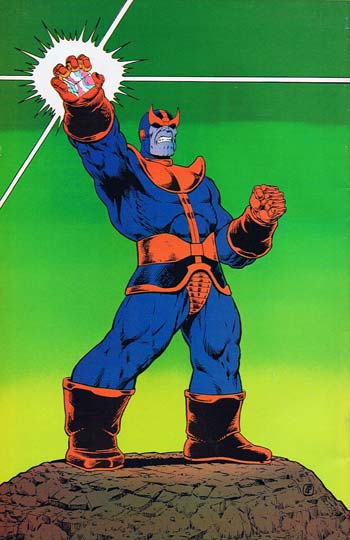 I made up my own caption for it, which goes a little something like "No, wait you guys, I totally made my saving throw on my special die, can I get my feet changed back to normal sized now?! Please? You guys?"

This entry was posted in Retroviews, Super-Hero Stuff. Bookmark the permalink.

5 Responses to Retroview: The Life of Captain Marvel