There were three "Silver Age Classics" in last week's Random Comic Stack, and reading back through the old issues was a real treat. Besides all the stuff I already knew, I was surprised to discover that everyone in the Fifties and Sixties stuttered. Everyone. It was always from an excess of emotion, and not even Superman was immune to it. Frankly, I blame Watergate, "Three's Company", and hippies (in that order) for desensitizing us to the point that no one gets stuttering-inducing fits of emotion in comics any more, which is a real shame when you get right down to it. You have to go to soap operas nowadays to get that level of real feeling, but I have high hopes that Frank Miller will soon have the Caped Crusader go all retro and say "I'm the G-G-Goddam B-B-Batman!"

Anyway, to prove the point, here are a few of the panels from just one of the super stuttering stories in the "Action Comics 252" reprint. This all takes place in the span of a mere eleven pages, people, and I am not even including all of the examples -- there's more. LOTS more. Know f-f-fear. 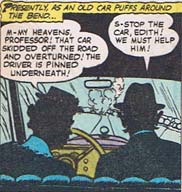 (The actual onomontoPOWia is supposed to just be RR, but of course the avalanche stutters.) 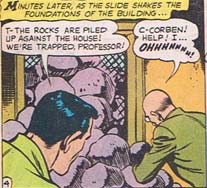 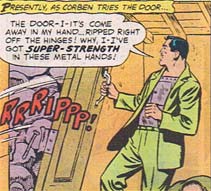 I think that last one is my favorite. Either Clark's an idiot and thinks the natural assumption when someone resists your grip is "That guy must be Superman!", or Metallo is literally crushing everyone's hand to pulp.

Besides the overwrought emotions, what really jumps out at me upon reading this issue is what a douche Superman is. Really. He flies in to find Metallo dead because he used fake Kryptonite -- conveniently provided by Clark himself -- to power his metal heart. And Superman's only thought is "He brought it on himself" before proceeding to make two tasteless puns about the deceased. This sort of thing has been well documented elsewhere, so I won't go on, but really, the Golden Age Superman was kind of a jerk.

The other main feature of these early books is just how implausible and slipshod the plotting is. Nothing really makes much sense if you think about it for more than two seconds, and there's always some weird coincidence that diverts Superman just in time for the criminal to escape. I also love the cavalier way everyone treats uranium, the other power source for Metallo. It sits around in cans on shelves, the Professor who builds the artificial body just happens to have some laying around the lab, etc. etc. I am surprised no one glows in Metropolis.

Make that "I-I'm s-surprised that n-no one g-g-glows in Metroplis." I wouldn't want to not fit in, after all.