The joys of bugs

I've been going crazy all morning, trying to figure out why two of the hands I drew don't properly mask out the items you put in them. Basically what masking means is, I can define an area in one item (the hands) that blocks out part of another item (like guns), so it looks like the hand is actually gripping the gun instead of just being layered on top of it.

That's a bit confusing, so I'll show you what I mean. Here are the two items unmasked: 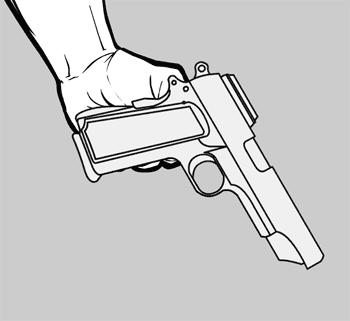 And here they are masked: 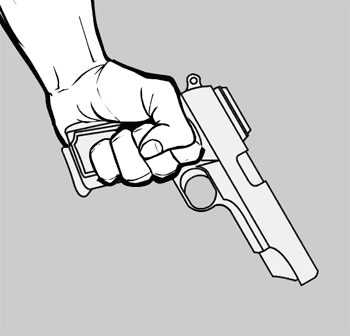 You can see the difference -- in the second one, even though the gun is the same illustration as the gun in the first one, the handle gets blocked out by the fingers curling around. This is great because it lets me draw the entire hand-held item (i.e. the gun grip) and still use it in any kind of hand.

But this morning there were two hands that just refused to mask properly. No matter what I did, the proper parts of the gun type items didn't get blocked, and I couldn't figure out why. I tried recreating the mask object, I tried redrawing it, I tried renaming things, I tried deleting and starting over, I tried comparing the non-working ones to the working ones, and nothing made any damn sense at all.

I assume I am not the only programming type person to run into roadblocks like this, where nothing works and you don't know why. I am probably more prone to it than most because I am, frankly, a hack when it comes to Flash (meaning I didn't go through any formal training, I'm entirely self-taught). I keep running into holes in my education, and I never know if it's something wrong with me or the program, or both.

This time, it turned out to be the program, and in an incredibly stupid and irritating way.

How freaking jacked-up is that?! I can't imagine the Pope telling Michaelangelo "I like the parts of the Sistene Chapel ceiling you did with the brush strokes going left, but not the strokes going right. Change them all to match."

I mean, I know in Physics there are left-handed and right-handed particles, but this is nuts.

Luckily a Google search turned up a page that held the solution in the comments, for which I am profoundly thankful. This ruined my whole morning and part of last night; it's a really stupid bug, and I hate it, but at least now I know how to work around it. I never would've guessed the solution in a million years, though -- thank goodness for Google!

11 Responses to The joys of bugs