The difference between corporate and creative

This week's pile o' randomness was an interesting batch of butt-kicking, living-island-of-Japan, Robot Fighting madness. It started out with this rather disturbing Barry Windsor-Smith cover illustration of X-O Manowar #5, and I challenge you to tell me just what that ... um ... "doo-hickey" is on his left pectoral: 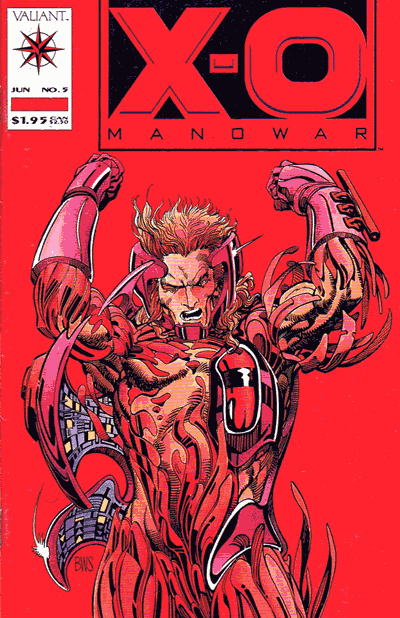 All I'm saying is, I sure hope it doesn't end up sliding further down as the suit finishes forming, ifyouknowhatimean.

Anyway, this batch of random comics was full of contrasting styles and imperatives which I'll go into after the jump.

In the early Nineties, independent publishers like Valiant, Eclipse, Dark Horse, and Image were challenging DC and Marvel for marketplace dominance. They went about the task in a variety of ways, but their primary method was to hire hot young talent and set them free to create. Sometimes that didn't work out so well (paging Rob Liefeld and your many iterations of long-clawed anti-heroes), but looking back, I'm impressed by the high quality and creative variety you can find from that time.

Take this week's haul as an example. One of the issues is a really cool flip-over edition consisting of "Magnus Robot Fighter" number 7 and "Rai" number 3, in a story which also flipped over itself. Take a look at the covers: 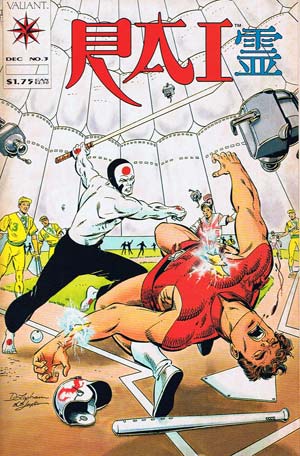 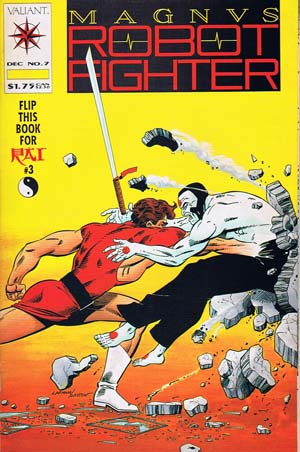 I love how they're basically two panels of an action sequence blown up to cover status, and each is pencilled by Dave Lapham, creator of critically-acclaimed "Stray Bullets". Each character's half-book takes place from their point of view, which is a cool story-telling technique. And there's a great sequence when Magnus pounds Rai with a cybernetic baseball bat that's just too neat.

I do, however, take exception to Magnus's Dallas Cowboys Cheerleader-inspired white boots and ultra-short tunic-skirt. I'm no physicist, but take a look at his cover, there's no way, anatomically speaking, that he's doing more damage to Rai in that pose than he's doing to himself with the way his skirt's binding up. Ouch!

Magnus, Rai, and X-O occupied the same Valiant universe, and the three stories here all touch on one another in some way. The cross-over is deftly-handled. The same is true of the other independent book in the set, "Phantom of Fear City" from Eclipse Comics and Claypool Comics. Claypool set up a fictional ghost-haunted Connecticut town of Mystic Grove where a lot of its titles take place, giving the whole "universe" a comfy feel. It's all drawn in black and white, which suits the supernatural feel of the comic quite well.

As a bonus, the issue is written by Steve Englehart (who you've encountered here before as the author of the "Coyote" series of seriously strange books -- you remember, the one with guys walking around with half their brains missing and talking raven-aliens) -- who wrote the three issues of DC's "Millennium" I also found in this week's batch.

"Millennium" was a huge cross-over saga for DC in the same spirit as "Crisis on Infinite Earths" and "Infinite Crises on Multiple Earths" and "Secret War Crises on Earthly Infinites" and "Urgently Irritating Split Infinitives". Or whatever. The difference in the ham-handed treatment of the DC universe with the much tighter and smaller Valiant stuff is really striking. Englehart has always been about bringing in philosophical and religious thinking into his books, and you can see him trying with his Millennial tale involving Batman, Superman, Firestorm, and other various spandex-clad people.

Which is where it all falls apart.

We're being asked to take seriously all of this philosophical hoo-ha coming from what are, if we're being honest, profoundly silly characters. You've got a bunch of popular, mainstream characters, who desperately want to be taken "seriously" on one hand with DC, and on the other you have characters from Valiant who aren't well known enough to be self-conscious about the fact that they're super-heroes.

I've felt for a while that part of the problem with mainstream comics is that they're over-burdened with their own long history. They've lost the sense of "I don't care what people say, I'm wearing a damn cape to school" that makes this genre workable. When you start taking yourself too seriously you squeeze out a lot of what's great about super-hero comics. Part of the problem is in the expectations the reader brings with them, of course. You can't read "Millennium" and think "What that nice man in the red cape is saying makes sense" because you know he's Superman, who has in the past fought giant walking clown robots and fought with his own fake future twin to keep him from marrying the wrong girl. Or whatever.

See, we have a history with these guys, and that's a problem.

I don't know who the hell Magnus Robot Fighter is, so I'm free to just roll with the punches and have a good time. It's like dating a girl for the first few times, when you think that little giggle is fun, versus dating her for the 2000th time and remembering how she used that same giggle that time she cut your heart out with a spoon by cheating on you with your best friend.

Popular characters come with baggage, and while there's sometimes some great stuff in your baggage, there's no question it weighs you down. Seeing the same guy doing two series for the two different companies really drove the difference home for me.

One Response to The difference between corporate and creative