Comic book artists often leave out complicated crowd shots in their books for a reason -- drawing crowds is both difficult and time consuming. Everyone has to be in perspective, everyone needs to look different, there are tons of details, and it all takes forever to do.

Luckily the fact that I both understand their plight and share their reluctance to draw such things does not in any way prevent me from mocking them. You gotta love the democratizing power of the Internet.

As Exhibit A, I present this opening panel from "Guardians of the Galaxy", Marvel's attempt to project its financially successful modern characters forward ten centuries so they could squeeze even more money out of the likes of me and you. The heroes are being attacked by a gang called "The Punishers", modeled after the fabulously popular anti-hero of the same name. 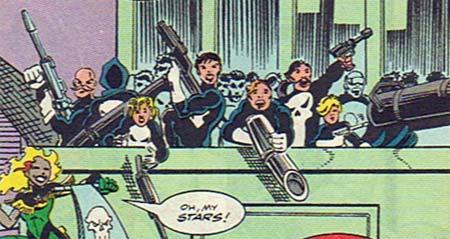 I can't decide if this is a deliberately post-modern ironic tweaking of the gun-toting, kill-em-all mentality that pervaded the industry at the time, but regardless, I love this panel. The massive weapons that make no sense, the ominous guy in the Old Navy hoodie, the cheap skull t-shirts, this gang has it all. Here are some of the highlights as I see them: 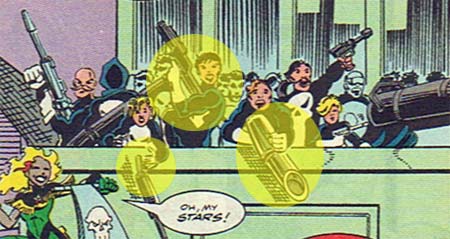 On the bottom left, I think maybe this young lady has dropped her loaded blaster, which given its size isn't surprising. Either that or her hand's rapidly moving up and down, indicating that she's using the "Masturbatron 4000", a devastating weapon that fires deadly wads of acidic goo after stroking it.

In the middle, the mass of this gun has sadly severed this woman's head from her torso, shoving it back at least a foot from where it ought to be. Remember kids, guns don't kill people, head-severing gun butts kill people.

Finally, I don't know if the guy on the right is using a cannon or a giant leaf blower, angled at the bottom for maximum foliage-clearing effect. Guns don't bend, people!

I also love the massive mustachios on some of the people in the crowd. Apparently in the future, they can't make proper weapons but they have made huge advancements in the facial hair-care industry, so that's encouraging. Not having read the rest of the series, I can only guess that Tom Selleck is their god.

(Image from "Guardians of the Galaxy", Vol. 1, No. 20, ©1991, Marvel Entertainment Group, Inc. Jim Valentino, writer/artist; Ken Lopez, letterer; Steve Montano, inker; Evelyn Stein, colorist. Note that editor in chief Tom DeFalco is credited as "The Beaver", which possibly is a harmless pop-culture television reference but which I prefer to read as the most blatant attempt at calling your boss a p**** that I can remember.)

2 Responses to The madding crowd