Certain iron-clad maxims ruled the naming of comic book characters in the Nineties, and one of the most important (after "Base it on a variant of 'Blood', 'Death', or 'Strike'") was "Include 'Ninja' somewhere in there." Showing the economy of effort that made them almost a success, Valiant decided to just slap an extra letter on the end and thus gave birth to "Ninjak': 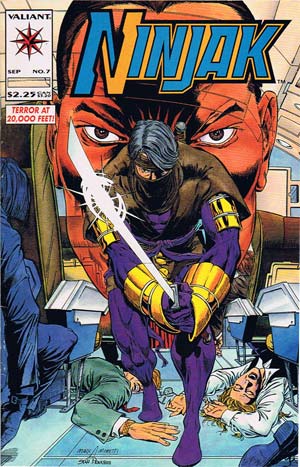 I've always assumed his name was supposed to be read all in one, as if his name were "Jack" but had "Ninja" appended to it, like a shortening of "Ninja Jack". But now I am forced to wonder if perhaps there was a whole line of these guys a la James Bond and the Double-O series. Like this fellow is eleventh in a series of Ninjas, just after Ninjaj and Ninjai, but before the inevitable rise of Ninjal. Regardless, I think Valiant was really onto something with this naming deal, and I eagerly await the appearance of female sidekick "Ninjill".

Ninjak used to work for The Weaponeers, a global organization that developed and sold high-tech weapons, before they were eliminated by the terrorist group WEBNET (motto: "All your capital letters are belong to us!"). Eventually he'd go on to confront them and their nefarious plot to distribute "Black Water", which in some way I can't be bothered to look up is different from Jed Clampett's "Black Gold", also known as "Texas Tea". I think maybe Ellie Mae worked for them, but this particular issue involves "The Djinn", an assassin using one of the Weaponeer prototype weapons to kill a diplomat at an airport. Knowing how fond of cameras politicians are, the weapon's the unlikely union of a gun and a car muffler -- you take the guy's picture, pull the trigger, and the "smart bullet" goes out and kills the dude, no muss, no fuss: 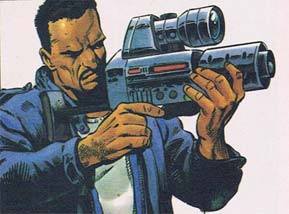 Since you don't have to be in line of sight, you can be anywhere within 700 meters, we're told, and still get your man. Through the magic of Google Calculator, I was able to determine that 700 meters is almost half a mile. As a result, the dread Djinn fires his weapon not from nearby Short Term Parking, but from ... a bathroom. Apparently smart bullets can open doors, they're very polite that way.

If you can get past that particular bit of lunacy, you won't have a problem believing that Ninjak spots the disguised Djinn and follows him onto a plane, which still has taken off on time despite an assassination in the terminal. Sure, they delay my flight for an hour because it's raining in Kuala Lampur, but off a UN diplomat down the hall and everything's hunky-dory.

Inevitably there's a fight onboard the plane, which begins with the Ninja assassin ritual of urinating on nearby objects, leg lifted: 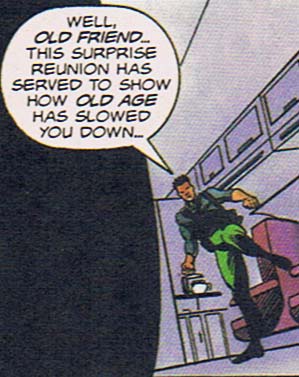 Inevitably the smart gun gets involved, taking a lovely snapshot of Ninjak's cowled face and thus targeting our hero. One might wonder why he doesn't just loosen the cowl, or change it out for his shirt or something, but maybe the bullet's really smart and that wouldn't have worked. In any event, while it may be smart it's slower than Christmas: 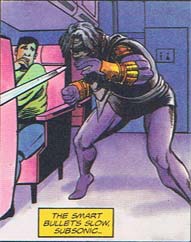 In fact it's so slow and so maneuverable that it manages to turn around -- twice! -- in the narrow confines of an airplane aisle. Now that's some agile bulleteering, my friends!

Apparently, though, like so many youths in the Nineties the smart bullet is addicted to video games, because Ninjak is able to trick it by waving a Gameboy under its metal nose and tossing the device out the door. No, really. I'm not surprised the Weaponeers were brought down if their best tech can be defeated by Super Mario Kart.

Luckily everything's brought to a satisfactorily bloody conclusion, with a plane full of dead bodies in the sky and a decapitated Djinn used as a flotation device for our "hero". My only beef with this issue, besides the completely nonsensical parts between the covers and the wanton bloodshed and the name of the character and the inane physics of the smart gun, is that the cover shows Ninjak with a sword while in the comic he's without his weapons, presumably because even in the go-go Nineties you couldn't pack a blade in your carry-on luggage. Of course no one had a problem with him boarding with metal armor and a kevlar vest, or with Djinn packing in a parachute, smart gun, and high explosives, but then, you can't expect airport security to catch everything.