"Better late than never" is my motto when it comes to movie reviews and employment, so in order to keep the latter I shall obey the former and offer up my belated review of "Hellboy II: The Golden Army". For those of you who, like me, have a short attention span, here's the one-sentence summary:

The great first half of "Hellboy II" makes it worth seeing on the big screen, but the slow and disappointing second half should make you catch a matinee instead of paying full price.

The full review is after the jump. 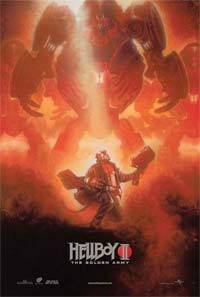 When it comes to Hellboy, I want big mean monsters beating the snot out of each other; I want blue-collar working-man devil reactions to fantastic situations; and I want to have twisted, ironic fun. Hellboy II has two of those three attributes, which I suppose means it's a success. Unfortunately, leaving out twisted, ironic fun sort of makes giant monsters and blue-collar devils a bit dull and uninteresting, which is why overall I'd have to rate this movie a disappointment.

Which is too bad, because the first half of it is arguably one of the best super-hero movies of all time. I had seen "Dark Knight" earlier that day, and the contrast was amazing. Whereas the Batman release was dark, brooding melancholy and white-knuckled terror, the first half of "Hellboy II" is bright, fun, crazy super-powered in-your-face adventure. It felt a lot like the best parts of "Iron Man", with a fully-realized cast of characters well acted, with a wonderfully believable and brilliantly rendered world of fantastic creatures living amongst us. There were great character scenes, great fights, and a ton of fun.

Then the second half of the movie began and it all just sort of fell apart.

I don't want to give away any plot points here, but there's an interlude where the characters are all back at BPRD headquarters and a bunch of brewskis get consumed. For me, the movie ground to a halt at that point and even massive mechanical armies couldn't pep it back up. I kept coming up against plot holes that just didn't make sense to me. Too many missing allies, too many missed opportunities, too many heavy-handed plot points that served no real purpose and made no real sense, too much light and not enough heat. The contrast with the first half of the movie, which was great, just made the second half that much more disappointing.

I had high hopes that "Hellboy II: The Golden ARmy" would make my Top Ten Super-Hero Movies of All Time, but no such luck. It's still an entertaining experience, and it's definitely worth seeing on the big screen, but catch a matinee if you can.

Ron Perlman (Hellboy): Perlman turns in another strong performance here, bringing an engaging working-class-guy weariness and practicality to the giant red suit and devil horns. I can't imagine anyone else playing this part and pulling it off. Unfortunately he's not given a great deal to work with in the rote, Hollywood big-budget second half of the film.

Selma Blair (Liz Sherman): Is it too much to hope that Selma Blair will set Molly Shannon on fire in their new sitcom, "Kath & Kim"? Probably so. Still, it'll be interesting to see how Blair's strengths in "Hellboy" -- that melancholy, world-weary, wounded Goth girl sensibility -- will play in a sitcom. Regardless, she's excellent if understated in her Hellboy role, doing about as much with this part as could be done. I think she's probably the best female lead in any super-hero movie to date, with the possible exception of Gwyneth Paltrow's Pepper Pott. Pott, however, can't torch an entire auction house full of demons.

Doug Jones (Abe Sapien / The Chamberlain / The Angel of Death): Jones' performance suffers from comparison with David Hyde Pierce's from the first installment of the franchise. He's not bad, but I kept thinking how much better Pierce's "Sapien" was the entire time.

This entry was posted in Movies and TV, Super-Hero Stuff. Bookmark the permalink.