Like a great Zen koan, "What is the sound of a three-toed hyper-strong blond-wig-wearing green-skinned Abominatrix jumping?" tickles your brain and sprains your consciousness into a higher plane of existence. Because let's face it, the fact is that there is no sound when you jump, only when you land. Fortunately "She-Hulk" characters are exempt from the stodgy and boring old rules of physics and acoustics, as we see here: 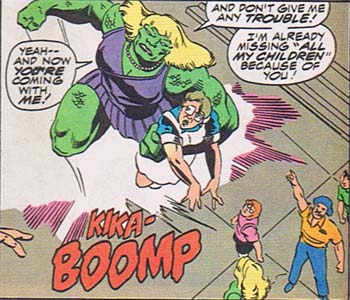 What's really neat is that there are two sounds to her normally soundless take-off, KIKA and BOOMP. I can almost sort of see how you'd get KIKA, assuming her three toes have really long nails that are clacking on the cement, even though that would be KLIKA if you think about it. Which I don't recommend you do, to be honest.

But they really lose me with the BOOMP. Again, if it were BOOM I could kind of squint my ears and imagine it's a sonic boom perhaps, the sound of her breaking the sound barrier at the beginning of her leap. But then, you wouldn't be able to hear her witty repartee about missing a soap opera. Or it could be the sound of air rushing in to fill the void she's suddenly vacated by hauling her enormous gamma-radiated carcass off the tarmac.

But BOOMP? No, that I completely don't understand unless it's a veiled reference to the fact that what Abominatrix is really missing on TV is an X-rated Betty Boop tribute of some sort. But that doesn't bear thinking about.