Mashup 23: In the Keystone Quadrant

By taking one (and only one) panel from each of ten randomly chosen comic books, each week I attempt to put together some sort of entertaining ten-panel story. This week finds us in the middle of an inter-species gun-fight, and I think we can all agree that we don't have nearly enough of those in comic books today.

So without further ado, off we go into space! 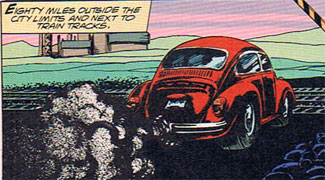 Elite forces of the two warring Keystone factions, the Asgardians and the Zendaks, have met at a small town outside the capitol city in a clash of arms. 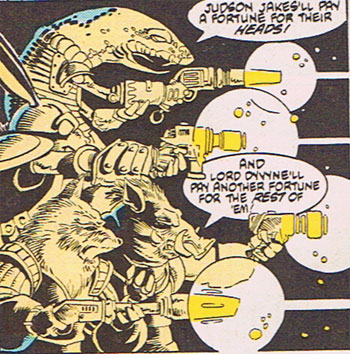 The Asgardian leader, Judson Jakes, unleashes his Mindless Horde in a final push, hoping to force the Sendak patriarch Harokin into battle. 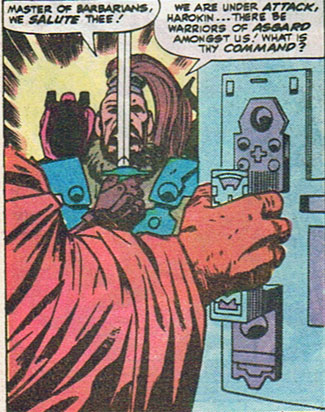 The Patriarch takes the bait, but is met unexpectedly by the trenchcoated Jakes himself on the field of battle. 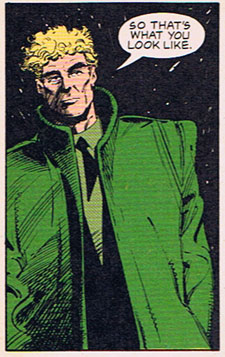 An instant's hesitation, a flurry of guns drawn, and then ... 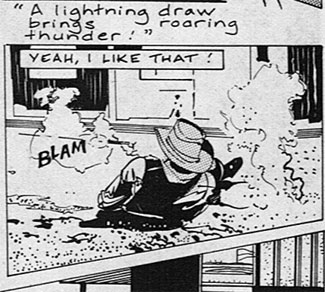 Harokin's aim is unerring and deadly, virtually shredding his rival in instants, forcing an immediate retreat from the Asgardians! 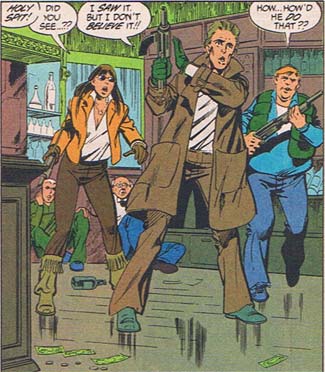 The infighting of his lieutenants as the enemy leaves the field threatens to bog down the army's initiative, infuriating Harokin. 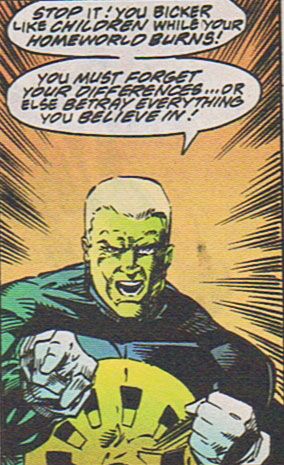 Unfortunately, his demands for unity among the usually fractious legions under his command meet with little success. 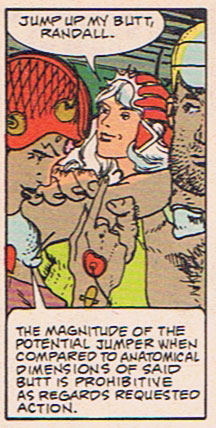 Both armies now in disarray, one from the death of its leader and the other from bickering over who will get the spoils of victory, the battle is surely destined to rage on, much to the dismay of the ordinary people who inhabit the Keystone Quadrant; war, as ever, is hell on the little guy.

The images appearing above are from the following comics, in order of appearance.

"Trinity", No. 2, ©1993 DC Comics. Michael Jan Friedman, plot; Mark Waid and Gerard Jones, script; Barry Kitson and Chris Hunter, pencils; Dan Davis, Dennis Kramer, and Frank Percy, inks; Albert DeGuzman, letters; Stu Chaifetz, colors. Here's a free tip for any of you comics industry bigwigs out there. If your project requires a scripter and a plotter, two pencilers, and three inkers, it's going to suck. Witness "Trinity", an unholy multi-space-going-comic-characters crossover featuring L.E.G.I.O.N., the Green Lantern Corps, and the Darkstars, with all of the cringe-inducing anticipation of crap you, the savvy reader, would expect. Dreck.

One Response to Mashup 23: In the Keystone Quadrant