Our celebrity judge and co-host for this week's Caption Contest is none other than Johanna Draper Carlson, of "Comics Worth Reading" fame! Many thanks to Johanna for coming up with the panel for our contest this time around; since she's been instrumental in opening my eyes to what manga (Japanese comics, basically) has to offer, I asked her to pick a good panel from that world, and boy did she deliver: 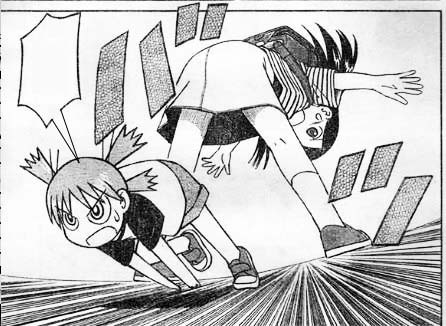 Johanna will also help judge the winner after all the entries are in, so don't be afraid to go over to her blog and leave some nice sucking-up style comments! Flattery might not work, but then again, it might.

The funniest entry (as judged by Johanna and me) will win a free black and white custom illustration of whatever they like (within reason) by professional illustrator Jeff Hebert (that's me!). So put on that funny cap and get to work! The contest ends next Monday night / Tuesday morning.

(Note: The contest is now closed and Johanna is deciding on the winner. Check back later today for the announcement!)