Posted on June 27, 2008 by AFDStudios | Comments Off on When comics go silent

For this week's installment of onomontoPOWia, I thought it might be interesting to take a look at an actual published comic page with sound effects, and then without. "Showcase '93", issue 9 (©DC Comics) features a fight in a convention hall between Peacekeeper and some thugs from Viper (or maybe some other snake-themed group, it's hard to keep them all straight). Here it is as published, with sound effects intact: 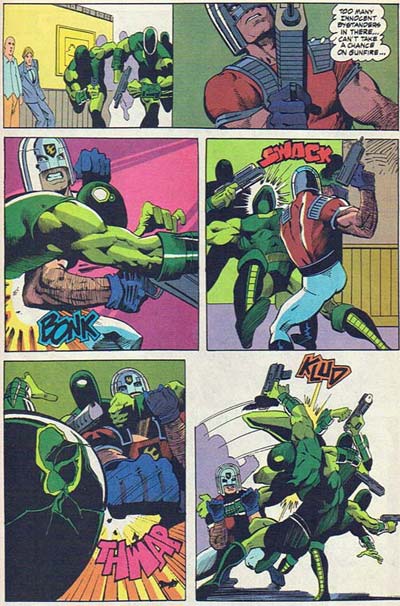 And here it is with the sound effects removed via Photoshop: 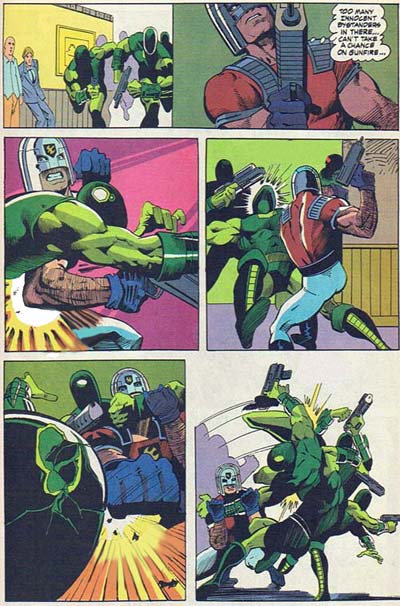 You still get what's going on, but removing the element of sound (even if that sound is nothing more than additional lines and colors of ink on paper just like the character illustrations) greatly diminishes the impact of the action. In part this has to do with how our minds process comics panels.

Sound exists only in time. It is inherently dynamic, unable to exist as a static phenomenon. And yet comics are inherently static, still images on a printed page existing as-is regardless of how much (if any) time passes around them. Combining those two diametrically opposed elements greatly enhances comics' ability to trick our minds into believing that we are watching action, that what appears on the page is unfolding in time.

OnomontoPOWia is not unique in this ability, of course, but I believe it is one of the most powerful due to the unique nature of sound. When you see "THWAP!" you can't help but imagine you are hearing it out loud, carrying the images associated with it forward as well. Like a movie without a soundtrack, the medium of comics can still be effective without onomontoPOWia, but it's a much different experience.