Superman is often dismissed as an out-of-touch throwback to old-fashioned and irrelevant mainstream middle-American values, but in this shocking expose I reveal for the first time that he actually invented rap music.

All right, not all rap music, but I have indisputable proof that he invented the genre known as "Crunk", which Wikipedia defines thusly:

[C]runk is a genre of hip hop music. Unlike the East Coast and West Coast style of hip hop, crunk has a high-energy and club-oriented feel. While other hip hop styles might involve a more conversational vocal delivery, crunk usually involves hoarse chants and repetitive, simple refrains. Lyrics are based on a rhythmic bounce, which is very effective in a club environment ... The first popular figures to use the word were Atlanta rappers Outkast, who in their 1993 song and accompanying video "Player's Ball" said, "I gots in crunk if it ain't real ain't right".

So crunk first appeared in rap music in 1993, and yet I have unearthed this photo taken in 1986 in front of a well-known urban dance club, showing Superman creating the word while confronting notorious crazy-eyed drug-fueled stereotypical rap-music-practitioner "Hawaii Hank" who is, as you'd expect, wielding a handgun to further his nefarious unsavory schemes involving "hos" and "busting caps": 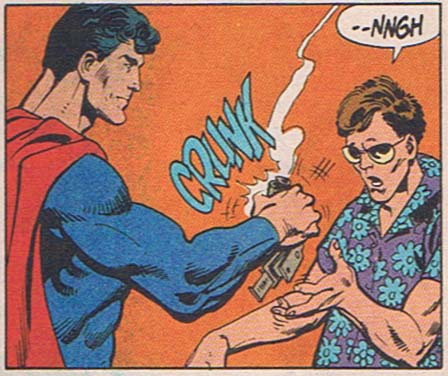 So much for the myth of the aw-shucks Kansas farmboy! If you need further proof of Superman's involvement with the free-wheeling crime-ridden underworld of hip-hop music, consider the following. In 1979 the rap group "Sugarhill Gang" released "Rapper's Delight", widely considered the hip-hop album that catapulted the genre to worldwide prominence. Unfortunately for the group, the following lyrics from the song also came to the attention of a certain breakdancing Kryptonian:

Considering Sugarhill Gang never had another hit, you can be pretty sure that def fly guy Superman went all crunk on 'em. You don't tug on Superman's cape, fellahs, even Jim Croce knew that. Chumps.

One Response to Superman invented rap