I am happy to announce that just a few minutes ago, I finally figured out how to let you save your own color swatches in the upcoming HeroMachine Minis! As in the current HeroMachine 2.5, you can pick a custom color by scrolling around a color grid, or by typing in the RGB values manually, but for the first time you can now save that custom color onto your own swatch so you can easily use it on other items. Here's a screen capture showing the six customizable color swatches in use: 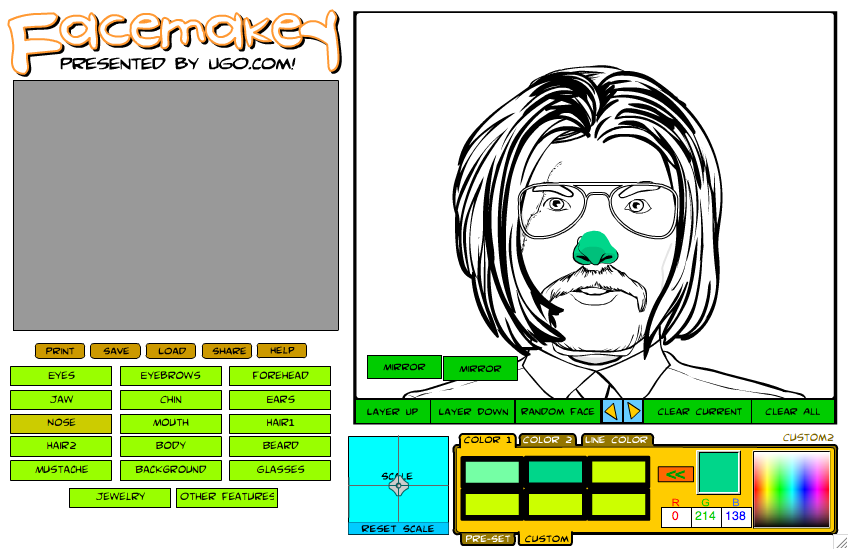 You can choose to work on either of two color areas like in regular HeroMachine applets, or you can change the line color (which is both all-new and extremely useful). And at any time, no matter which color area you're working on, you can switch to either the pre-set 60 color swatches or you can toggle over to make your own custom ones. Ultimately I'll probably add more than six custom color swatches, but I'm not sure yet of the exact number. I also am having a bit of a problem with the color grid not matching up exactly with what you're mousing over. I didn't actually write that part of the code, it's adapted from free source at FlashKit.com, so fixing it is a bit of a challenge.

Also, although I haven't yet put the buttons in their proper place, you can see a couple of neat (if not terribly useful) features that let you mirror the face horizontally (i.e. flip it left to right) or vertically (i.e. flip it top to bottom). Not exactly killer, must-have stuff, I admit, but fun. I am going to try and see if I can get it working on individual items instead of the entire picture area, which probably would be of more use.

Finally, I am trying to figure out an easy way to do item previews, like in the full HeroMachine 2.5, so you can see a set of thumbnails for a given item slot without having to manually scroll around them. I've seen complaints about the Her-O-Matic application in that regard, so I'm going to try and solve it here. In HM2.5 that's all done by hand, with me copying and pasting the item line art into pre-made buttons, lining them all up, making new screens when needed, and that sort of thing. But that takes a lot of time and isn't very efficient. And without getting technical, if you try to move or resize an item, it ends up resizing all the previews too. Which sucks.

So if I can figure out how to a) make the previews generate themselves automatically in a way that b) doesn't ruin the ability to scale and move the items themselves, I'll do so.

And if I can do that, I'm more than halfway to the full feature set I want on HeroMachine 3. I'd still have to figure out how to rotate groups of items (all the parts of the arm, the whole torso, etc.), and how to load up separate sets of items not included in the base application, but most of the really hard stuff will have been done.

Anyway, if you see anything in the screen capture that prompts a question, by all means fire away in the comments. The program is really starting to come together and I'm super excited to put it out there. I know I've promised previews a couple of times in the past, so I won't do so now (I keep adding more features that delay things, but on the other hand they make it much cooler!). But I am indeed working away on it!