Today's installment of the "Monday Mashup", wherein I take one (and only one) panel from each of ten randomly selected comic books in an effort to make a coherent story, shows us a hero distraught over what he perceives as his failure, and turning to his father for comfort.

"It was just another standoff with a bunch of punks holding hostages, or so I thought -- that testosterone-driven freak Reagan had already gotten there with his armored goons in blue, and it was getting ugly. 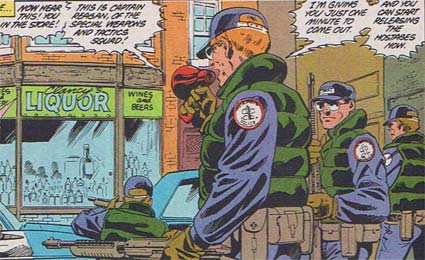 "I got inside before any bullets started flying, but what I found there was ... disturbing." 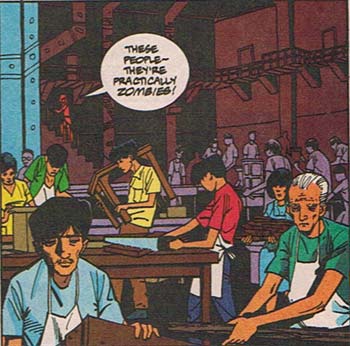 "I don't know if it was the shock of seeing human beings turned into living robots, or maybe some residual toxins in the air, from the zombification process, but the guards seemed freakish to me, grotesque cartoons of cruelty and hunger ..." 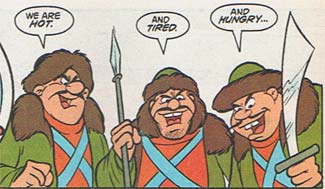 "One of them, Pa, I swear he had no expression on his face at all, he pulled a gun on one of the young women like she was nothing more than a snake to be cleared out of the fields." 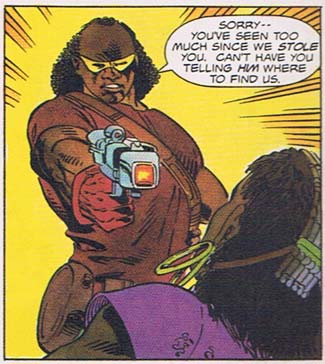 "Before I could move she was dead, I couldn't believe someone could be that callous but he put that bullet through her like it was nothing ... " he says, his voice shaking, overcome with emotion.

But the father's words cannot penetrate the dreadful darkness that has consumed his super-son, the alien who all too painfully has become aware of just what it means to be a mortal human after all.

"I'm sorry, Pa, did you say something?" he asks, his face a fallen mask of blame and self-loathing, the pain too much for his father to bear. 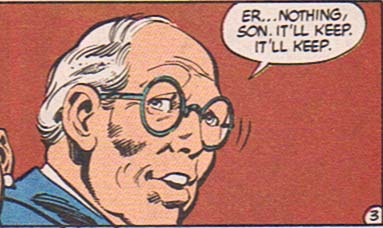 There comes a time in the life of even a Super man when muscles and speed and flight will not suffice, when words seem cold and pitiful comfort, and only the embrace of a father -- even (or especially?) an adopted father, whose love is as much a choice as an obligation of biology -- can help ease the pain of a broken heart.

The comics appearing in today's Monday Mashup are, in order of appearance:

Note that there were four issues of the reprinted John Byrne Superman reboot in this stack. On rereading them, I have to say they're really good, somewhat to my surprise. I don't know why I would be surprised, I suppose I just figure at this point that most of what I liked growing up was actually crap. I present "The Dukes of Hazard" and "The A Team" as prime exhibits of what I am talking about. Byrne's Superman, though, really holds up well, that guy could really tell a good visual story when he was into it.

This entry was posted in Mashups, Super-Hero Stuff. Bookmark the permalink.