By taking one (and only one) panel from each of ten randomly selected comic books, I will now spin for you a tale of love, hope, and sordid physical violence!

We begin with a story as old as time, a triangle of love between a beautiful woman and two men (in this case three young students at a super-hero training academy, but love is love!).

Alas, Annie's affections are unrequited by the target of her affections, the mustachioed Bill (the man with the "gorgeous tush") -- or his horse, either, for that matter. 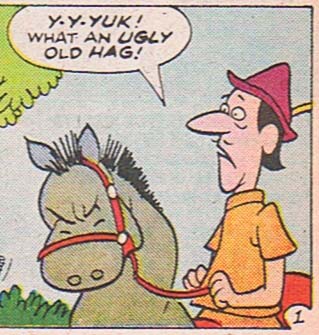 For the third member of the love triangle, Linkvold, watching his rival spurn his love's affections is made worse by the taunting of his friends. 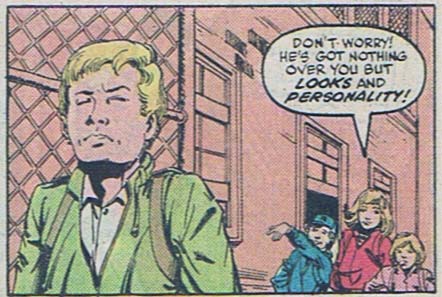 He tries to pass off his pain as so many other young men have done in the past, but no one is fooled. 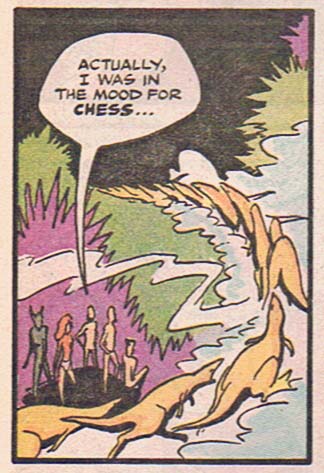 Being a kind-hearted young man, Linkvold calls Bill to admonish him for calling Annie a "hag", but Bill reacts angrily, taking off on yet another conveyance. 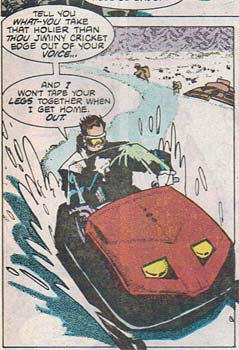 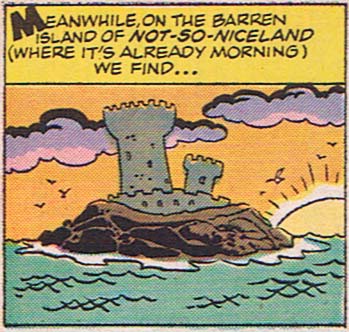 On that dread island resides The Djinn, master of mental arts and sworn enemy of the academy, who -- sensing an opening in the form of Linkvold's jealousy -- strikes!

Taking control of the callow youth's mind, The Djinn forces a physical change as well, transforming Linkvold into a ravening beast bent on destroying both his rival and his love! 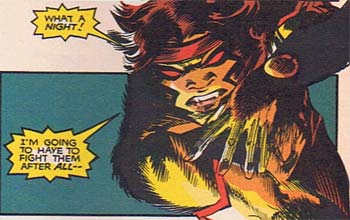 Bill may be a dapper dandy, but his highly keen senses warn him just in the nick of time that danger is afoot!

Forewarned or not, however, Bill is no match for the jealous rage of the light-haired Linkvold, as Annie looks on in horror! 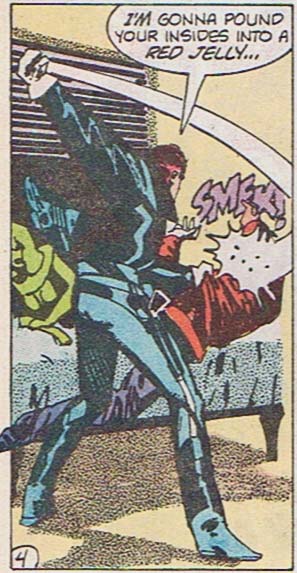 Tune in next week* to find out if The Djinn's heinous plan will work, or if Bill and Annie will somehow overcome their hypnotized, powerful friend!

Images in this week's mashup are taken from the following comics, in order of appearance: