Posted on May 23, 2008 by AFDStudios | Comments Off on OnomontoPOWia meets onomatopoeia

In actual English, onomatopoeia means both "a word with way too many vowels in a row" and "the formation of a word, as cuckoo or boom, by imitation of a sound". Changing that to onomontoPOWia eliminates excess vowels from the concept (which, given the critical shortage of vowels in many former Eastern Bloc nations is the responsible thing to do), and narrows the concept down to mean sound words used as visual effects in comic books. Sometimes, though, the two cross over, as we see in these panels from "Sovereign Seven" number 20 (©1997, DC Comics): 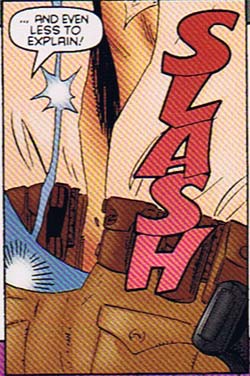 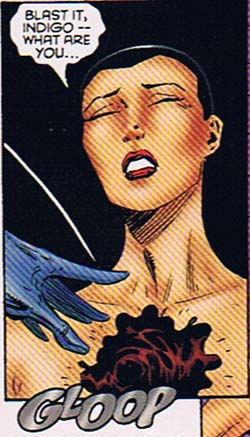 Both "slash" and "gloop" are legitimate words with recognized meanings that arguably originated by naming the sounds for which they stand. In that sense, both of these onomontoPOWias are actual onomatopoeias. They ultimately both fail as onomontoPOWias, though, and here's why.

While I can buy a knife going "slash" as it swings, it does nothing to mark the different ways a leather belt, a cloth shirt, and denim pants would sound as they rip. It's just a ploy to clear the way for one skin-tight-suit-wearing ninja woman to cut the clothes off an unnaturally lithe and winsome country female sheriff.

On balance, though, they fail because the sound effects do not enhance the action or the story in any way. They're just lazy window dressing, when they could have been much more.

Regardless, of course, I think we can all agree that using hot athletic ninja women slicing the clothes off of authoritative assertive in-charge chief female sheriffs so they can leap around in skin-tight biogenetic combat suits kicking the crap out of bad guys is yet another example of why they ought to ditch "Dick and Jane" in our public schools and teach with comic books instead. I can guarantee you more boys would start reading.