I'm about 70% done rewriting the HeroMachine code from the ground up for the series of "Minis" I've talked about before. These are intended to be rapid-development applications like the Rock Star Edition or the Real Life Edition, which won't have the sheer volume of items in the full 2.5 but instead will focus on more of a "niche" type of area. I needed to have actual items to test the code on, so I had to choose one of the "Mini" varieties we've discussed to get started with. I settled on the Face Maker, because it seemed like it would benefit the most from the new features I wanted to include like line coloring, scaling, moving, etc. Keep in mind, the whole idea here is that once I get the code base finished, filling new versions with new and different items should be a breeze. I'm hoping to put out at least one a month when ready, maybe two if I can really get it down to a science.

Anyway, even though I only have two items in each slot so far, I think it's showing promise. Here's a screen capture of what I've done to date. I should be finished up with the basic code early next week, at which point I'll begin really pumping out the items. Note that the colors and the look of the interface is just a shell, to be "prettied up" once everything's working. 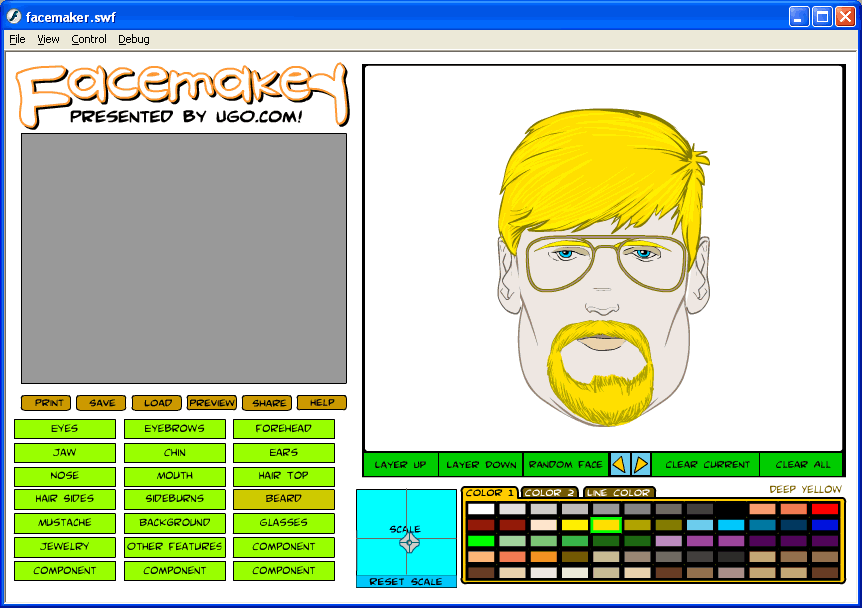 The big-ticket functionality items still to address is the layering, the printing, and the saving/loading stuff. All of that's pretty close to the current code so I don't think they'll be very hard to do. I was most worried about the scaling and moving the items around, and that's worked out pretty well.

Note that the beard and the mustache are actually two separate layers. I was able to shove them together to make it look like an all-in-one Van Dyke kind of thing. That's one of the early, and surprising, benefits to movable item slots -- it's very easy to tweak things around to make new combinations that would not have been possible otherwise.

I've also been very surprised at how much of a difference being able to change the line color makes. I always thought that was kind of a cheesy request, but once again the user community knows far better than I do.

Once all the buttons have at least minimal functionality, I'll probably post a very early beta for you all to play with and critique.

One Response to The Facemaker cometh