When asked if she wanted to go see "Iron Man", my wife said "Who's he?", immediately disqualifying her from attending. So it was up to me and my pal Dave to pass geek judgment on the film. Dave and I are pretty hard to please when it comes to movies, and very hard to please when it comes to super-hero movies. Having said that, here are the three things you need to know about "Iron Man":

The longer version, containing random jumps from topic to topic, is after the jump. 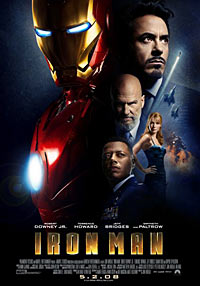 The visual effects are stunning. This is the first CGI film I've seen that is completely believable. At no point did I stop and say to myself "That's a computer graphic." I mean, I'm not naive, I know almost all of the full-armor stuff is computer generated, but it fits in with everything else so well it doesn't call attention to itself. An effect you don't think of as an effect is, my friends, a very good effect indeed. And this movie's full of them.

The acting is outstanding. I completely bought Robert Downey as Tony Stark and Iron Man, both. That's not as easy as it sounds; an actor can do a good job with the alter ego and not so good with the hero. Or neither, of course (paging the entire cast of "Fantastic Four"!). Downey absolutely nails this part in every respect. Ditto for Jeff Bridges as Obadiah Stane and Gwyneth Paltrow as Pepper Potts. Great, great stuff. The only one I didn't care for all that much was James Rhodes, but even in the comics that was a fairly dull character, so I'll give that a pass.

The story is fantastic, in all the best senses of that word. Completely believable (in a comic book way, of course), very engaging, fun without being campy, and chock-full of killer dialog. I felt like I was back watching "Swingers", with that wonderful snappy banter. I was surprised Favreau didn't get a writing credit, the dialog seemed very "him". The main moral dimension of the story was great, too, allowing you to take away a great number of angles on it without being heavy handed in editorial tone at all.

A common problem with super-hero movies is that an awful lot of time gets spent doing backstory stuff -- here's the character's birth, here's the character's upbringing, here's how he got his powers, blah blah blah. "Iron Man" dispenses with all that in a thirty second video pitch, and immediately launches you into the creation of the super-hero identity. It's hard for me to overstate how well paced this film is, and I think that storytelling decision is the main reason. From the opening scene you're right in the middle of Iron Man the character.

Johanna Draper commented on her site that part of the reason for this may be that there's not a very big delta between Tony Stark and Iron Man. In many ways Stark himself is a larger-than-life super-heroic kind of guy already, so the transition to the armored version isn't jarring at all. You don't have to spend mental effort adjusting to the idea of meek Peter Parker suddenly beating up bad guys, or scratching your head wondering why Superman bothers being Clark Kent at all.

Look, that's enough digital ink spilled already. I don't want to give away plot points, because I hate reviews that do that. Go see the freaking movie already. Go on, git! What the heck are you doing still reading this! Go already!!

And wait until the end of the credits. That's very important. Don't forget the wet wipe.