February 1, 2008: This contest has ended, so comments on this post have been disabled.

After receiving a staggering 136 entries of exceptionally high quality and spending hours agonizing over them, I've settled on the top five finalists for the "Win a Free Character Portrait Contest". You can see all 136 entries in this Picasa web album, and the 46 "Honorable Mentions" in this one. I'll list the finalists after the jump.

I rated each entry in four categories: Overall appeal/design, Uniqueness, How well the HeroMachine engine's versatility was displayed, and Illustration potential (i.e. how much fun would I have drawing the character). The highest scores formed the set from which the finalists would be drawn (these are the ones in the "Honorable Mentions" gallery). Once I had those, I tried to put together a set of five which were not just the highest scorers, but which would showcase the overall versatility and range of the program itself. I wanted to try and have a mix of fantasy, science-fiction, super-heroic, and pulp/modern images, along with some female and some male.

And now, the envelope please ... Your five finalists, in no particular order, are: 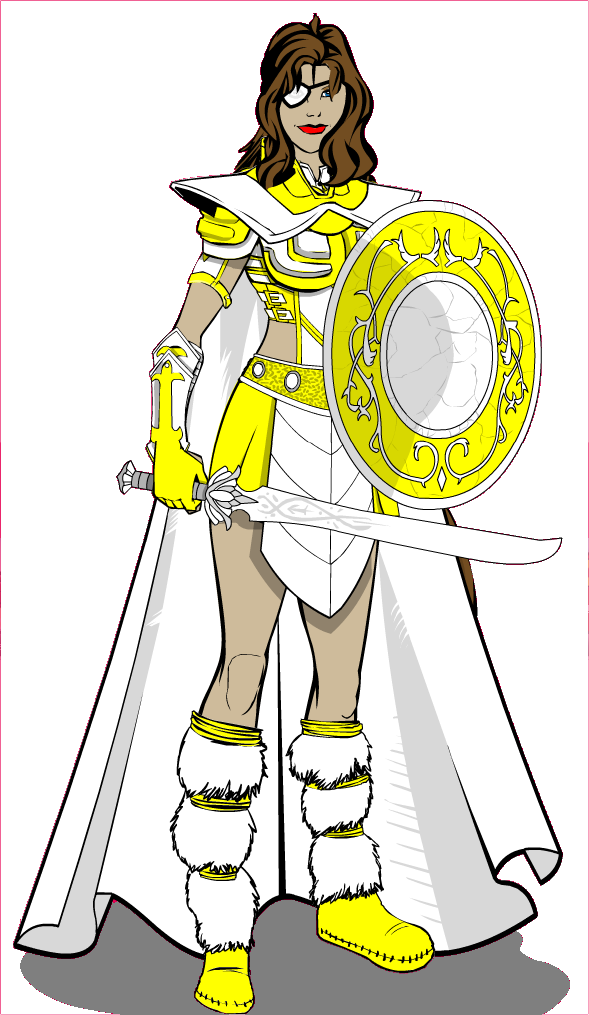 From the creator: Princess of Ilavein, an empire in its golden age, Marinae was unhappy with her decadent life. That was until she found Aifer, the sword of justice and Mahfir, the shield of truth. With her new found power she seeks out evil in her empire to bring it into the light.
Jeff: Strong design, the items all look good together and the simple color scheme works really well. I think the eye patch is what sells this one. She looks like she'd be very fun to draw. 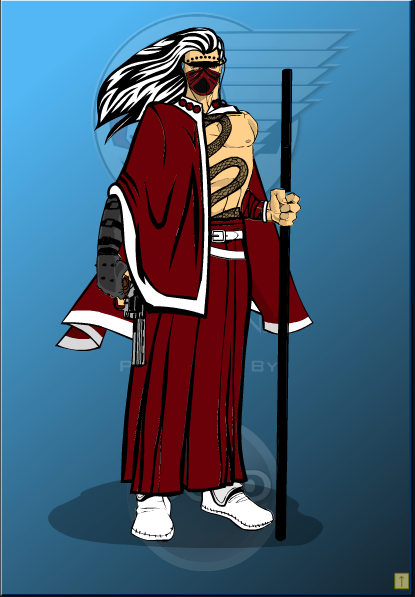 Jeff: I loved this one the moment I saw it. The combination of the snake tattoo, the handgun, and the staff really work for some reason. I like the use of the knight's helmet beneath the kerchief mask to create the illusion of slitted eyes, that's an excellent and creative use of the program. I want to know more about this guy, which is the hallmark of a good character design. 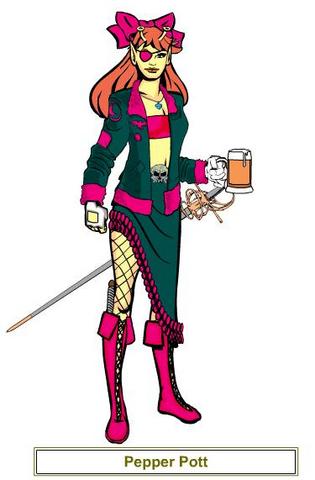 Jeff: She's a space pirate, which I always love. This is a character that grew on me over the course of the week; I like the Manga-ish feel to her, the bare-knuckled attitude of the glass of beer combined with the innocent-girl quality of the bow. I don't know what it says about me that both of the female entries have eye patches ... 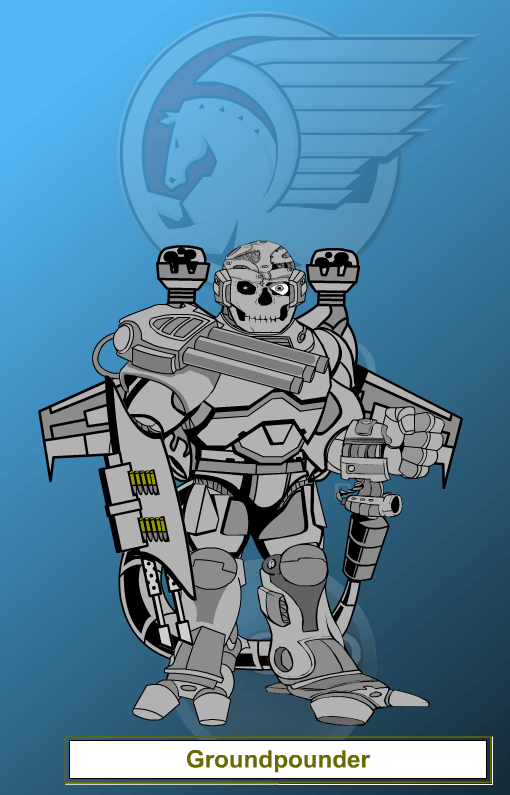 From the creator: In the battlefields of 2024 the thought of sending in valuable humans is unthinkable. That's what robots are for. Not only does it make people feel better about wars of dominance by keeping Mrs. Smith's child safely in the States, but robots are cheaper to maintain as well as faster and stronger than any other human soldier out there.

The Groundpounder unit is considered the best design thus far for pure destruction. Along with the twin 50 calibur machingun arm and the 40 millimeter shoulder cannon (using the tail for extra support when used) it also has jump jets capable of short hops over obsticals and back mounted twin grav-cannons for long ranged strikes. It's compact size benefits it by giving it a lower center of gravity as well as making it a smaller target to hit.

Jeff: A great sci-fi entry, particularly the use of the cyborg head with the skull face. This is the meanest looking dwarf-based character I think I've ever seen. 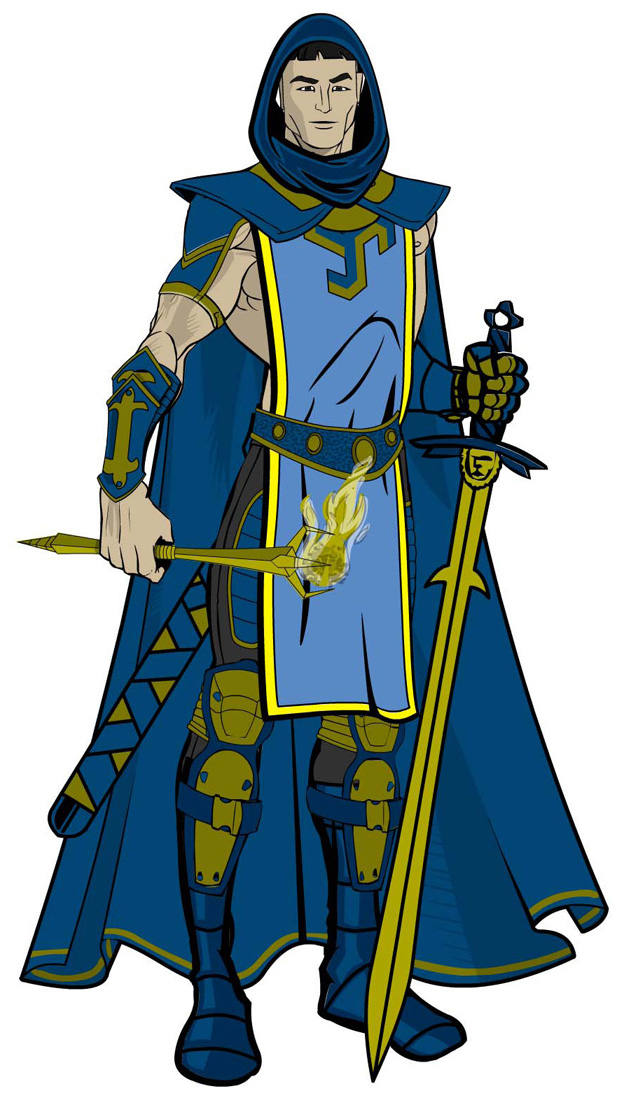 Jeff: I almost didn't include this one, because the image is already pretty darn perfect, I wasn't sure if I could do any better. The colors all fit very well, the item choice is great for a knight, but with just enough tweaking to make it unique. This was an exceptionally tight, well-thought-out character design.

Congratulations to all five entrants! The character receiving the most votes by midnight Sunday will be the winner. Each computer can vote once per day, so encourage your friends to come and vote for their favorite too.

Good luck, and a sincere thank you to everyone who entered! Oh, and feel free to use the comments to point out why I'm an idiot for picking x instead of y, or to give your opinion on why a given character should win, etc. etc.

This entry was posted in Challenges, Cool Characters. Bookmark the permalink.