By virtue of the authority vested in me by BAs in Art and English ("Why get one useless degree when you can get two?"), I hereby coin a new word to describe visual sound effects used in comic books*:

OnomontoPOWia: turning text into art in order to render sound. From onomatopoeia.

Yes, capitalizing the POW is required. And if I could figure out how to insert an exclamation point in there without killing half the librarians in the world with a brain aneurysm, I would.

You see examples of onomontoPOWia in pretty much every title on the stands. "Sound effects" help bring the page to life, strangely making the action seem more real even while inserting a completely unreal visual element into the scene. The 1960's camp series "Batman" really brought this technique to prominence, with spinning "POW!" and "BAM!" starbursts flying from the Caped Crusader's fists. But they've been with the medium virtually from the beginning, and they continue to make comic books better and better. Or worse and worse, depending on how they're used.

And so, as an homage to this underrated comic book element, every Friday I will attempt to bring you an awesome example of onomontaPOWia, like this mind-blowing example found in Marvel Comics' "Battle Tide II": 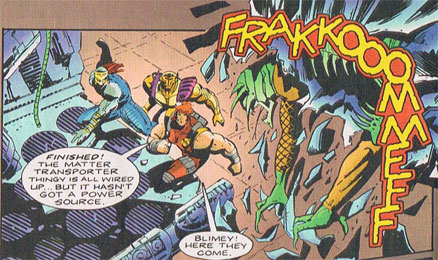 "But Jeff," I can hear you saying, "that's inane, there's no such sound as Frakkooommfff." And you'd be right, but this is Marvel Comics' Pumping Iron imprint, the not making sense is a vital part of the entire enterprise. I mean, come on, this issue features characters named "Killpower" and "Death's Head 2", paragons of unoriginality, in a book unoriginally titled "Battle Tide 2", and you're complaining about a truly original sound effect? Be thankful for what you get, infidel!

Naturally, they couldn't refrain from using the one original element over again:

Now you might ask, as I did, what the audible difference is between "Fra-koommff" and "Frakkooommfff". And the answer is, why do you hate America? Clearly there's a hyphen in the one and some extra os and ms and fs, and I say if you are going to let a little thing like the fact that this makes no sense bother you, then just go ahead and hand over our great nation to the commies. As for me, I will be wrapping myself in the flag, barring the door, loading the ammo, and waiting for "Battle Tide 3" featuring "Deathpowerkiller 4" and "Slaughterface Savagepants 6" and cursing all those long-haired onomontoPOWia hippies who denigrate our fine comics tradition.

*I am coining a new word even though I feel pretty sure there's already one out there. Anyone know what these kinds of sound effects are called by others, maybe from Eisner or McCloud?