I got to see "Beowulf" in glorious 3D IMAX last weekend, and while I really liked it, I think ultimately it gets a bit lost in the Uncanny Valley.

In a nutshell, a virtual or robotic character is in the Uncanny Valley when it looks almost-but-not-quite-close-enough to real to be incredibly creepy. It's the gap between iconic-enough-to-be-convincing realism on one edge, and completely convincing on the other. Drawings or animations or robots that are between those two points trigger very unpleasant reactions in the viewer, making you feel like something is horribly wrong with what you're seeing.

Comics as a medium (and I'd include the visual style of HeroMachine in that generic visual set, even though it's not actually comics per se) gets a lot of its power from presenting visuals that are generic enough that the reader can invest them with their own life, but not so real that we start to keenly notice where they fall short. Here's an example of what I mean, inspired by Scott McCloud's "Understanding Comics": 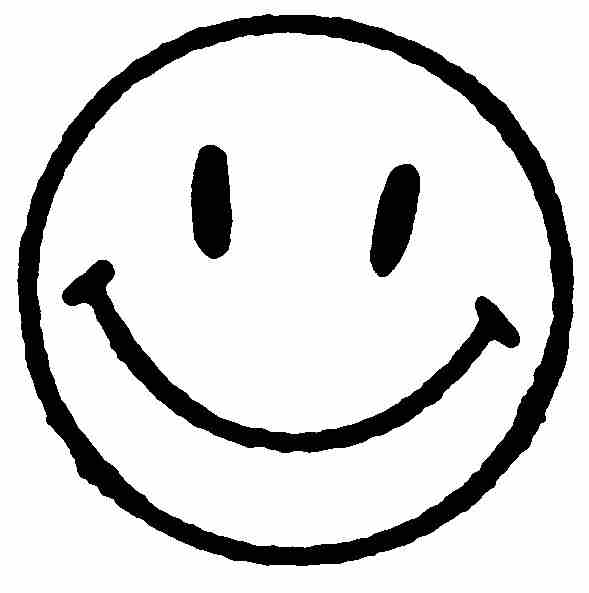 Everyone in the world recognizes this as a human face, and accepts it readily as such. But why should this be? It lacks hair, a chin, jaw, nose, eyebrows, pupils, lips, features that most people would think are absolutely required to be a face. And yet, it's absolutely effective in making you think "That's a face" when you look at it.

Compare that to this still of a Robin Penn Wright's "Wealthow" from Beowulf: 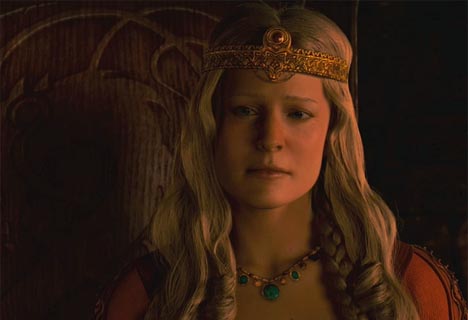 Again you know right away this is supposed to be a person. But it's not a generic person, like the smiley face, it's very much an individual, and so you evaluate it as such. All of those millions of neurons in the human brain that are built to detect human faces, to pick one individual out of a crowd of thousands, start firing, frenetically looking for the most minute clues as to this person's identity.

And that's where the trouble lies.

You can see a bit of it in the still, particularly the waxy skin. When the character is in motion, it's much worse. I kept feeling that her jaw and lips were half-frozen, every time she spoke I got a little creeped out. It was like watching a mostly-revivified zombie moving around, which isn't bad for a video game but not what you're going for in a supposedly real woman. The hair bothered me too, it seemed too ropy and stiff, and the headband seemed like it was a molded part of the head instead of a separate item. These are all small things, but because the rest of the face is so close, the small things were that much more significant.

Filmmakers, animators, and illustrators all have to grapple with the fact that millions of years of evolution have adapted our brains to pick out differences in human faces. We can't help but notice when things are off, even if we don't think about it consciously; our social survival for eons has depended on it. Even when all you're dealing with are very abstract images like the smiley, our massive face-imaging brains fill in the gaps to complete the picture, satisfying the biological imperative to see individuals. The lack of specificity triggers that face-recognition hardware enough to satisfy, but not so much as to frustrate.

But when most of those details are already filled in, the neurological machinery really hits its stride, drilling down to very small things. And when the total of all those small things don't add up to equal "Real Human Face", we're bothered. Something's not right. We feel a little uncomfortable because the parts that aren't right stand out against the backdrop of all the stuff that is spot-on. This is the Uncanny Valley, that massive drop-off in believability between generic-but-convincing (like a smiley face or comic book drawing) and very-close-to-real-but-not like a bad digital animation.

Don't get me wrong, the characters in Beowulf are really, really close. On the sharp incline of The Uncanny Valley, they're definitely on the upslope of the far end; I don't think it's going to be long before we see digital actors that are indistinguishable from real ones to most people. In fact, for stretches of the movie, I think they've gotten there already, with Wiglaf in particular. But it's not there yet, not all the way. I kept wishing throughout the movie that they'd just done away with the rotoscoping and instead used the actual characters, filling in with special effects where necessary. The story's excellent, exactly what you'd expect from the incredibly talented Neil Gaimon, but ultimately animation has to serve the purpose of telling a story. And in Beowulf, too often it instead distracted from it.