Feature requests, future version enhancements, and anything else you want the program to do.

It looks like most people want non-human limbs next, so let me know in the comments to this post exactly what it is you're wanting from a set like that. Links to actual images are the most helpful, but just words are fine too if you can't find a good image.

Note that leaving suggestions for anything not related to non-human limbs won't be a lot of help, since by the time I get to whatever set you're talking about, I will forget what you asked for.

The face of time

With many thanks to Hammerknight for his excellent ongoing series of how-to articles, I am happy to present his latest. Let him know in comments what you think and any other guides you'd want to see from him. 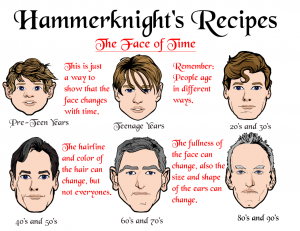 (With many thanks to friend-of-the-site Hammerknight, who now presents you with suggestions on how you might use the new test Toon body. Enjoy, and be sure to thank him for volunteering his time! Click on an image to embiggen it for legibility.) 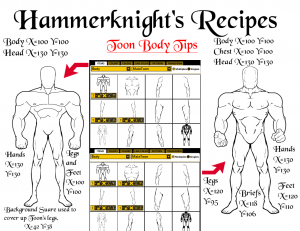 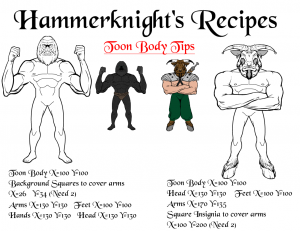 I'm moving on to Polearms for HeroMachine 3. Please make any polearm item requests in the comments below, and I'll see what I can do. As usual I'll be doing my best to port over all the 2.x items where relevant, so you can skip those. I'll be breaking each item up into at least three parts -- complete item, head, and shaft.

Finally, a few tips for making these requests to make sure you're not wasting your time.

I don't want to inhibit your enthusiasm at all, so please feel free to request at will. But I do want to make sure I've done my best to help you understand the most effective way to getting your requests turned into actual items, so you don't end up feeling I've wasted your time.

HM3: Next on the agenda

By a narrow margin, it looks like Blunts have beaten Firearms, so I'll be working on that next. Then I'll go immediately into Firearms, as I do think that's a glaring omission.

Feel free to post specific Blunt requests. Next week I'll do the same for Firearms but for now, please keep it to hand-held blunt-trauma weapons. Comments with links to an actual image of the requested item will get preferential treatment because, let's be honest, I'm lazy.

Edited To Add: Guys, as usual, all items (or close to it) from 2.5 will be included, so you can lay off those.

I'm going to start on hairstyles for HeroMachine 3 later today, but as you all have seen, I'm not great with hair. Probably a result of having been bald since I was seventeen, more or less. Anyway, if you have particular styles you want, or sites that feature the same, by all means let me know in comments.

I'm going to start working on Headgear today, so let me know any specific requests you have in the comments. If you've made suggestions about Headgear items before in other posts, please re-submit them here if you don't mind; it's hard to go back through the old stuff and pick out onesie-twosie requests.

And yes, I'll be including every current HeroMachine 2 Headgear item, so you can skip those.

HM3's Headgear slot will include at least sets for Standard, Helmets, Masks, and Glasses. If you think of other big groups of headgear-related items that deserve to have their own set, let me know that too.

My Portuguese is a bit rusty but thanks to Google Translator, I'm pretty sure the guys who do Her-O-Matic have a new version in the works, previewed here:

And here's another preview of the app:

What do you all think? It's got some really cool features, most of which (I think) are going to be do-able in the HM Warrior Mini, and then in HM3. Particularly the heads and hands and legs and such being swappable. The only big think I can see they have that I don't is the texturizing, but I have a pretty good idea how to do that. Is that something you'd want?

On the other hand, I don't see that in their version you can scale, rotate, or move objects, and I think you're going to find with the Mini that they are key features, which are going to make for some very powerful options.

They also don't have item previews, little versions of each one that you can scroll through. How important is that to you?

Anyway, they're doing a nice job, and I was curious what you thought about it. If there's anything you see that you want HM3 to have, let me know in the comments.

I now leverage the power of having my own blog to force you, the unwitting reader, to pay attention to my latest ideas for comic books which I will never actually publish! This reminds me of something I read by a popular author who kept getting people deluging him with book ideas. They would always tell him "I did the hard part in coming up with the idea, all you have to do is write it!" But the ideas are the easy part, as evidenced by the masses of people who keep thrusting them on him. The hard part is actually sitting down and cranking out the product, fleshing out the characters, making the action real, revising and revising and revising until you actually have something people can read.

Having said that, I now will do the easy part and just throw my ideas out there, secure in the knowledge that I am too lazy to actually get them done.

END_OF_DOCUMENT_TOKEN_TO_BE_REPLACED

I can hear you out there right now, thinking "I like reading this blog and Jeff Hebert is one darn sexy bald guy, but where can I go for yet more excellent comics-related blogging?" Luckily for you I am not just a mind-reader, but also a subscriber to the following Certified Good Comics Blogs:

That's pretty much what I read when it comes to comics blogs. I'd love to hear about others that you follow in the comments, so by all means feel free to throw out your own favorites!