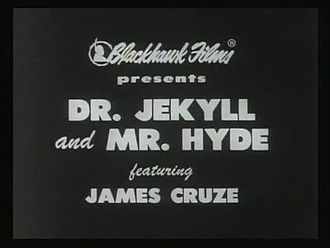 Hey, everyone, back again and looking at horror films. Also kicking myself for doing a project like this while also armpit-deep in Halloween, but that’s neither here nor there. Let’s instead move into 1912 and talk about one of the two versions of Dr. Jekyll and Mr. Hyde made during this decade. Let’s get to it.

Now, as I said above, this is the first of two versions of this same story. I opted for the 1912 version over the one made the next year because to be honest, I just found I liked this one better. The 1913 film is fine, but it almost seems too long (which sounds strange to say for a film with a 26 minute runtime), since they don’t have a whole lot of variety in what Hyde does. The second thing was I liked actor playing Jekyll/Hyde in the 1912 one better. In the later version, the way he bounces and shuffles around as Hyde I found too comically distracting, and not menacing at all. But enough about the comparisons, let’s talk about the film at hand.

The first thing I have to say I really enjoyed about this movie was the music, and how it was used to convey the dichotomy between Jekyll and Hyde. Jekyll’s music is calm and sedate, almost dreamy. Hyde’s, on the other hand, is mischievous in an almost malevolent way. It was very striking and I found it fascinating to watch how it emphasized the personalities of both characters. It really adds to the film and heightens the impact of the action.

The acting is very good, and as I said above, I preferred this version of Hyde over the other. In the 1913 film it was too over-the-top, and I didn’t get the same sense of menace like I did here. I mean, this Hyde straight up kills a man (his fiancée’s father no less!) after attacking her first. This is a huge contrast from the calm, kind Jekyll we see with her only a moment before. I didn’t think that anyone was hugely over-acting, either. They played this film totally straight without any camp. I really felt for the guy when things started going haywire and his evil alter-ego started taking over and wrecking things. Right after the police officer leaves when looking for Hyde, you see a brief shot where Jekyll drops down to one knee and just has this ‘what have I done’ moment. Then, at the end, you see even Hyde in a moment of desperation as his time has run out; he’s destroyed the laboratory and the police are breaking down the door. So then we see him find and take the vial of poison, and end to the madness for Jekyll and one last middle-finger to the authorities for Hyde.

The transformations themselves are done mostly with cuts, and look good, and I like the way they really made Hyde look so much different from Jekyll. The ratty, opposite-color hair, the blacked-out teeth, the buggy eyes and big eyebrows, and even the way he holds his hands in a gnarled way really emphasize Hyde’s personality and his contrast from Jekyll.

So, in conclusion, I really enjoyed 1912’s Dr. Jekyll and Mr. Hyde. It’s only 12 minutes long, but it’s a very enjoyable film and a really good interpretation of Robert Louis Stevenson’s novella. I definitely recommend it. Next time we’re going to be heading into the 1920’s, so I hope you’ll join me then! Until next time!

This entry was posted in Movies and TV and tagged Halloween, movie review, movies. Bookmark the permalink.